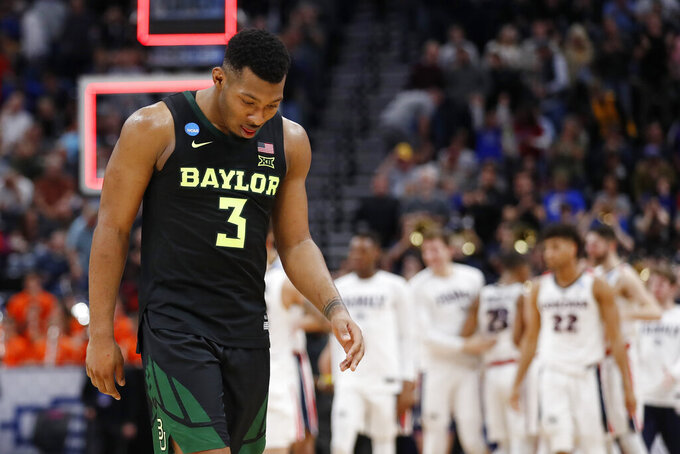 Bill Self stood in a room just off the court in Allen Fieldhouse on Selection Sunday and lamented that the Big 12 managed to squeak only six schools into the NCAA Tournament.

The Hall of Fame coach of Kansas pointed to the impressive nonconference wins that the league racked up in November and December. He highlighted the fact that the league had four of the top seven teams when it came to strength of schedule, including his Jayhawks at No. 1.

Well, so much for all of that.

The first weekend of the NCAA Tournament was a slap in the face to a league that habitually considers itself the toughest in college basketball. Regular-season co-champion Kansas State was beaten by UC Irvine in the biggest first-round upset, and Big 12 Tournament champ Iowa State lost to No. 11 seed Ohio State in what may have been the second-biggest upset.

All told, the league managed to send only Texas Tech to the Sweet 16, one year after it made up a quarter of all teams in the regional semifinals and still had three left in the Elite Eight.

"We're not supposed to be here," said Red Raiders coach Chris Beard, whose team is left carrying the banner for the entire league after sharing the regular-season crown with the Wildcats.

"They picked us bottom of the Big 12 and we haven't gotten much respect this year," Beard continued, "but these guys have continued to keep a chip on their shoulder and just realize that we can do a lot of things if we continue to play as a team."

The Red Raiders have been impressive after limping into the tournament off a stunning loss to lowly West Virginia in the quarterfinals of the Big 12 tourney. The No. 3 seed in the East Region cruised past Northern Kentucky, then routed sixth-seeded Buffalo to reach the Sweet 16.

The rest of the Big 12 will be watching as they face No. 2 seed Michigan on Thursday night.

"This means everything to me," said star guard Jarrett Culver, who has led the Red Raiders to back-to-back Sweet 16s for the first time. "I'm glad to be part of it, making history like that. It's a blessing to be something — be a part of something that special."

The entire conference actually got off to a pretty special start, winning its first four games in the opening round. But things went off the rails when the Wildcats and Cyclones went down in the first round, and the league continued to take its lumps over the weekend.

Auburn never gave the Jayhawks a chance in an 89-75 victory . Virginia shut down Oklahoma with its vaunted defense. Gonzaga had no problem with Baylor in advancing to the Sweet 16.

That left Texas Tech as the lone Big 12 team in a regional final, matching the fewest the league has sent to the second weekend since getting shut out in 1998 — its second year in existence.

And if the Red Raiders lose to the Wolverines? The last time the Big 12 failed to get a team to the Elite Eight was 2015, when both of its Sweet 16 entrants got knocked off.

"The thing about it is, it's been a challenging year," Self said. "I thought our kids hung in there and did a great job, for the most part. Their attitudes and everything was terrific. We didn't muster up enough momentum like some past teams have to probably go on a run like other teams have."

Self is right in that there were some things beyond the Big 12's control.

In the case of the Jayhawks, they lost star center Udoka Azubuike to season-ending wrist surgery, veteran guard Lagerald Vick left the team and Silvio de Sousa was rendered ineligible by the NCAA after his name surfaced in connection with the FBI probe into Adidas and college basketball corruption.

Baylor had to reinvent itself after losing talented forward Tristan Clark to a season-ending knee injury, while Kansas State played long stretches without point guards Kamau Stokes and Cartier Diarra, then entered the postseason without leading scorer Dean Wade because of a foot injury.

West Virginia dealt with injuries, defections and all manner of off-the-court strife.

Part of the fallout was that the Big 12 failed to get the same kind of NCAA Tournament seeding that it has in past years, and that in turn resulted in tough early matchups. Gonzaga and Virginia are both No. 1 seeds, and Kansas lost to a team in Auburn that just won the SEC Tournament.

"I got to be honest with you," Self said, "when I saw Auburn as the five in our bracket, I'm going, 'I just watched them play and they're fast,' and those are the teams we struggle most against."

For everyone but Texas Tech, the work toward next year's NCAA Tournament already has begun.

"I feel bad for whoever has to play us next year," Baylor's King McClure said, "because we're going to be pretty good. The guys following up, another year of growth, summer of work. That is one thing I can say about this group. We work hard, we stay in the gym. The transfers we got coming in. I just feel bad for next year because I think we're going to be very talented and be very special."