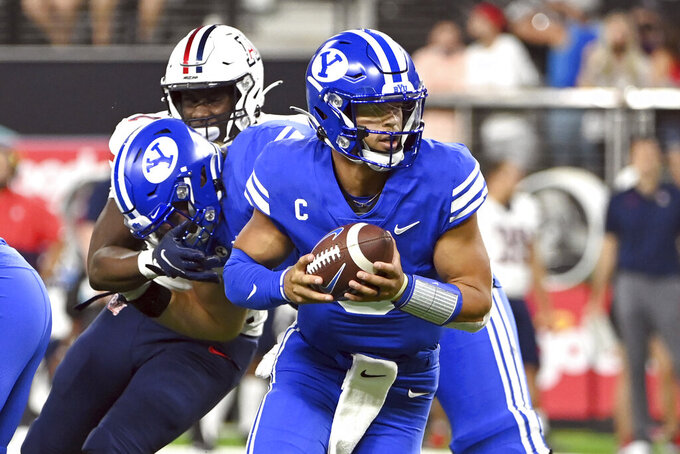 BYU quarterback Jaren Hall looks to hand off the ball against Arizona during the second half of an NCAA college football game Saturday, Sept. 4, 2021, in Las Vegas. (AP Photo/David Becker)

The Big 12 survived college football’s last significant conference realignment a decade ago because the league still had Texas and Oklahoma.

With the pending move of its only national championship winners to the Southeastern Conference creating another seismic shift, the Big 12 this time quickly moved into expansion mode. The league could add to its remaining eight members even before the Longhorns and Sooners are gone.

There will be no perfect replacements for Texas, the nation's richest athletic program, or Oklahoma, the six-time defending conference champion that is still the only Big 12 team to make the four-team College Football Playoff. And as of now there won't be any other teams coming in from other Power Five leagues with the Longhorns and Sooners starting SEC play no later than the 2025 season.

Four potential candidates for Big 12 membership include a current top 10 team (No. 7 Cincinnati) , a school with more than 70,000 students now far removed from a 13-0 season (Central Florida), an independent with a nationwide fan base (BYU) and a Texas school in the nation's fourth-largest city (Houston).

Oklahoma State coach Mike Gundy, who expects to meet with his school leaders Wednesday, said he didn't know anything about any conversations between the league and those schools, or even the level of interest between them. But he did indicate that they were good candidates.

“People see BYU as a Power Five team. ... See that logo, they don't really know they're an independent, and think they're tied into a Power Five conference. Central Florida has 71,000 students and they’re in a heck of a television market, and they have a heck of a recruiting base and they’ve played good football now," Gundy said. “Then you have Cincinnati, who has a a big television market. There’s a lot of people that live in that part of the country. And that logo has grown in popularity in the last few years, and they’re winning.”

Houston has become more of an SEC market since former Big 12 member Texas A&M's debut in that league in 2012. There is also the proximity to the LSU campus in Baton Rouge, Louisiana.

But having a team there, roughly 165 miles east of the Texas campus in Austin, could help Big 12 teams in recruiting. University of Houston regents voted unanimously Tuesday to delegate authority to the school chancellor to pursue membership in the Big 12.

Longtime BYU athletic director Tom Holmoe, while not commenting about the Big 12 possibility, has said his school's goal remains to be in position to play the country's best teams and athletes.

“When we were in the Mountain West Conference, we tried everything we could to play non-conference games and the really good teams in the conference. When we went independent, we expanded that quest, and we’ve continued to grow," Holmoe said before BYU's season-opening win over Arizona. "We’re at a spot right now where we just keep trying to keep that quest alive.”

The Big 12 already had a head start on vetting the current expansion candidates.

When the Big 12 last seriously considered expansion over a three-month process in 2016, Cincinnati, Central Florida, BYU and Houston were among 11 schools the league interviewed before deciding to stay at 10 teams. Part of that decision was based on an NCAA rule change that allowed the Big 12 to reinstate its conference championship game despite having fewer than 12 teams.

Texas won the Big 12′s last national championship in football during the 2005 season, five years after Oklahoma. The Sooners have made the CFP four times, losing semifinal games each time.

The Big 12 has just as many national championships in men's basketball: Baylor won it last season after Kansas won in 2008. The Jayhawks have been to three other Final Fours as a Big 12 member, and Texas Tech was the national runner-up in 2019. There have been four women's basketball champions from the Big 12, with Baylor winning three (2005, 2012 and 2019) and Texas A&M in 2011 before going to the SEC.

There is a different environment now. This time, there are no Power Five lifelines for the Big 12 as the SEC eyes its two new members amid an alliance brokered between the other major conferences, the ACC, Big Ten and Pac-12.

So the Big 12 will have to grow from outside of that, and fast.

Sign up for the AP’s college football newsletter: https://apnews.com/cfbtop25