Big 12 on upswing thanks to growing power of Texas schools 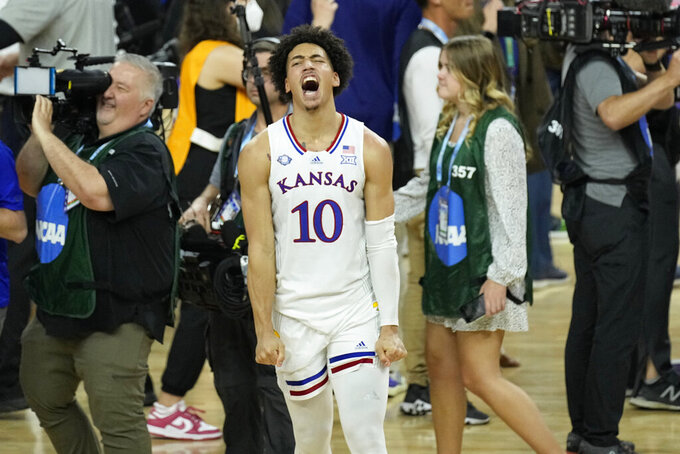 FILE - Kansas' Jalen Wilson (10) celebrates after a college basketball game against North Carolina in the finals of the Men's Final Four NCAA tournament on April 4, 2022, in New Orleans. Kansas will start off its season on Nov. 7, against Omaha. (AP Photo/Gerald Herbert, File)

KANSAS CITY, Mo. (AP) — Perhaps nobody in the Big 12 more strongly identifies with the Lone Star State than Chris Beard, who grew up in Irving and was a student assistant to Tom Penders at Texas before eventually becoming the Longhorns' head coach.

Beard has been at no fewer than seven different Texas colleges, four of them in the top job.

So when the AP Top 25 was released this week, and all four Big 12 schools in Texas were in the rankings, you can bet that Beard felt a certain amount of pride. Baylor was the headliner, tied for fifth with Kansas, while the Longhorns were No. 12, TCU two spots behind them and Texas Tech squeezing into the final spot in the poll.

“Those things are always personal to me,” Beard said. “I'm a Texan, period. And thinking back to where basketball was in high school, the Dallas area and Houston area — basketball has grown so much.

It's turned football-mad Texas into a fertile recruiting ground for hoops, and the colleges in the state have without doubt been the biggest beneficiary. Beard had Texas Tech playing Virginia for the national championship three years ago, and two seasons ago, Scott Drew led Baylor past then-unbeaten Gonzaga for its first men's basketball title.

The Bears figure to be in the Final Four mix again this season. The Longhorns think they could make a run. Texas Tech is coming off a Sweet 16 appearance and TCU has its highest preseason ranking in school history.

“When it was the Southwest Conference, they were pretty good back in the day,” said Horned Frogs coach Jamie Dixon, who played for TCU during that era. “But I'm not surprised by it. I think there's just better players in Texas now.”

If the Big 12 wants to get greedy, it could claim Houston a bit early. The third-ranked Cougars, who will join the league next season, followed a Final Four trip with an Elite Eight appearance last spring.

“I couldn't be more proud of how far the state has come in the last 20 years," Baylor coach Scott Drew said. "You could have multiple teams in the Final Four from the state. It's a great time to play basketball in the state of Texas, for sure.”

The Big 12 has long been considered one of the toughest conferences in the country, whether that was using head-to-head results or advanced metrics, only to come up short on the national stage. But now, the Big 12 is riding the strength of back-to-back titles after Kansas followed the Bears by cutting down the nets in April.

“You'd hear the knock: not enough national championships, or different teams that could win one,” Drew said. “The last three tournaments, we could very easily have three different champions. But to win the last game does mean a lot.”

For all its strength, the Big 12 doesn't necessarily have any locks to be NBA lottery picks next summer. The closest could be a pair of freshmen: Texas swingman Dillon Mitchell and Baylor shooting guard Keyonte George.

The preseason All-Big 12 team, voted on by the league's coaches, shows just how experienced its teams are this season. There were six players because of a tie: graduate student Marcus Carr and senior Timmy Allen from Texas, redshirt senior Adam Flagler of Baylor, senior Avery Anderson III from Oklahoma State, redshirt junior Jalen Wilson of Kansas and TCU junior Mike Miles, the league's preseason player of the year.

BACK IN THE SADDLE

Oklahoma State is eligible for the NCAA Tournament again after serving a one-year ban as part of the fallout of an FBI investigation into college basketball corruption. But such stiff penalties could be a thing of the past amid changes in name, image and likeness rules around athlete compensation and the way the NCAA metes out punishment.

“Although I’m disappointed that it looks like our program will be the last one to go through that,” Cowboys coach Mike Boynton said, “I’m happy future kids won't have to go through that for something they had nothing to do with.”

Kansas prides itself on having the toughest schedule in the country, and the Jayhawks are making another run at that title with games against No. 7 Duke in Indianapolis, No. 13 Indiana at Allen Fieldhouse and at No. 4 Kentucky in January.

Other marquee nonconference games include Baylor against No. 2 Gonzaga and No. 10 Arkansas; Texas against the Bulldogs, No. 23 Illinois and No. 11 Tennessee; and Texas Tech against No. 9 Creighton at the Maui Invitational.