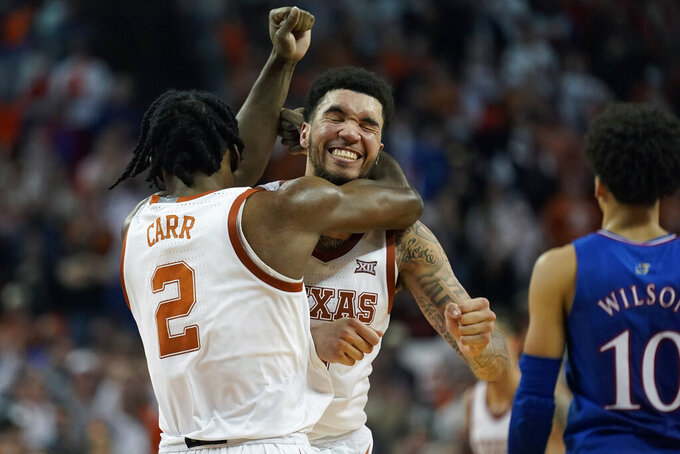 No. 20 Texas at No. 10 Baylor, Saturday. The winner stays in the thick of the Big 12 race with Kansas. The Longhorns (18-6, 7-4 Big 12) are hot, having won five of six after their hard-earned 79-76 victory over the Jayhawks on Monday. They're playing their fifth straight game against a ranked opponent. Baylor (20-4, 8-3) bounced back from a 24-point loss at Kansas a week ago with a 75-60 win at Kansas State on Wednesday. The injury bug has bitten Baylor in recent weeks. Season scoring leader LJ Cryer has missed four straight games with a foot injury. Baylor has won 10 of 11 against Texas.

TCU (16-5, 5-4) has a big opportunity to enhance its NCAA Tournament resume when it visits No. 9 Texas Tech on Saturday. The Horned Frogs get back 15-point-per-game scorer Mike Miles, who has missed two with a wrist injury. The Red Raiders (18-6, 7-4) are coming off a 70-55 loss at Oklahoma, ending a three-game win streak. TCU is 4-1 on the road this season but hasn't won in Lubbock since 2015.

West Virginia's Taz Sherman came back from a concussion to turn in one of his best games of the season in a 79-63 win over Iowa State on Tuesday. Sherman scored a team-high 16 points, grabbed eight rebounds and handed out six assists. The Mountaineers play on the road Saturday at Oklahoma State, a team they beat 70-60 last month. In that game, Sherman had 13 points to go with four steals and five assists.

Twelve of the 16 players on Kansas State's roster have combined to miss 79 games. Mark Smith is the only player to start all 23 games as injuries and COVID-19 protocols have forced head coach Bruce Weber to use 10 different starting lineups. ... Texas has posted a 48-8 advantage in points off turnovers against its last two opponents. The Longhorns tallied a 24-2 margin last Saturday against Iowa State and a 24-6 edge on Monday against Kansas. ... Iowa State's Izaiah Brockington is on pace to become the first Cyclone to average 16 points and eight rebounds per game since Melvin Ejim in 2013-14.