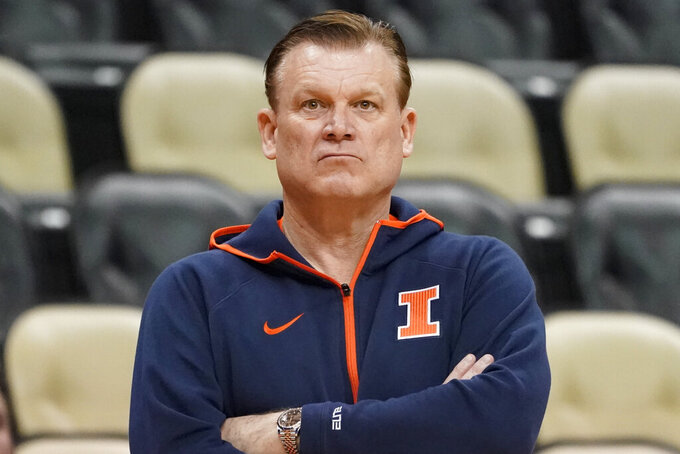 Illinois head coach Brad Underwood watches his team as they practice for the first round of the NCAA men's college basketball tournament, Thursday, March 17, 2022, in Pittsburgh. Illinois is to take on Chattanooga on Friday. (AP Photo/Keith Srakocic)

PITTSBURGH (AP) — The smile is wide and bright, like everything else about Kofi Cockburn.

The Illinois center, a man mountain and one of the most dominant interior players in this year's NCAA Tournament, is almost always the one leading the laughter during practice and any other time his teammates need a lift.

“He's a funny dude,” sophomore guard Andre Curbelo said Thursday, sitting next to his talented teammate as Illinois (22-9) got ready to face Chattanooga (27-7) on Friday in the South Region. He “brings energy every time, every day.”

Last March, the fun faded quickly for Cockburn and his teammates.

One of the tournament's favorites and a No. 1 seed after winning the Big Ten tourney title, Illinois got bounced in the second round by Loyola of Chicago, an upset that reverberated far outside state borders.

Now, even a year later, the memories of that stunning day in Indianapolis appear to be fresh for the first-team All-American Cockburn, who shifted slightly in his chair on the news conference dais in PPG Paints Arena before talking about it.

“We cried,” Cockburn said, “and it was like a bad locker room, everybody was so emotional inside. We’re trying to prevent that right now. So we’re more eager. We’re more locked in and we’re more focused.”

Cockburn has the Fighting Illini looking forward. And unlike a year ago, they're having a good time.

The only Division I player to average at least 20 points and 10 rebounds, the 7-foot, 285-pound Cockburn almost skipped his junior year. It wasn't long after the Fighting Illini were upset by the Ramblers, a March menace back in the same region with Illinois, Cockburn declared for the NBA draft before removing his name.

One of the forces that pushed him back to school was tournament redemption.

“It was a part of him coming back,” Illinois coach Brad Underwood said. “Kofi is very, very smart, and he was a second team All-American last year. His legacy means a lot to him. His jersey is going to hang in our rafters, which is special. He’s a wonderful student. He’s tracking towards graduation, getting closer.”

Cockburn isn't close to the same player he was a year ago. He's more complete, refining his game by perfecting footwork while developing a more diverse repertoire around the rim that will serve him well at the next level.

He's also become a more willing and more effective passer, able to recognize that when an extra defender drops down on him, it's time to find a teammate.

Cockburn's the focus of every defense he faces, so Underwood isn't too worried about what the Mocs might throw at Illinois.

Cockburn has carried an even heavier load for Illinois. And with those shoulders, that's hardly a problem for him.

Chattanooga's Silvio De Sousa has been impressed with Cockburn's maturity on the floor.

“One thing that stands out the most for me about Kofi is just how much better he has been in college compared to when I first seen him in high school,” said De Sousa, a 6-9 big man who began his career at Kansas. "The two players I played against, it was Final Four against Duke, against Marvin Bagley and Wendell Carter, those were one of the two biggest players I played against in college.

“He kind of reminds me of both of them.”

For the Fighting Illini, reminders of last year's tournament have only strengthened their resolve to go further.

Last year, with COVID-19 protocols limiting attendance and players being forced to isolate in their rooms, March had a different madness.

Underwood remembers winning the Big Ten title. Almost everything after that was a blur.

“To me that’s the end of the regular season, it’s the start of the new and it’s something to get excited about. This year we’re going to make sure we do that right.”

Life was different a year ago, and Cockburn said stress and anxiety affected him and his teammates. He worried about the health of his family in Jamaica.

Now, his mind is at ease.

"We weren’t as focused on us having fun because it was such a greater deal going on,” he said. “This year we have the opportunity to come out here and have fun knowing that our family is safe and we can do what we do.”

And for Cockburn, it starts with a smile.