Big brands and a big underdog in East at March Madness 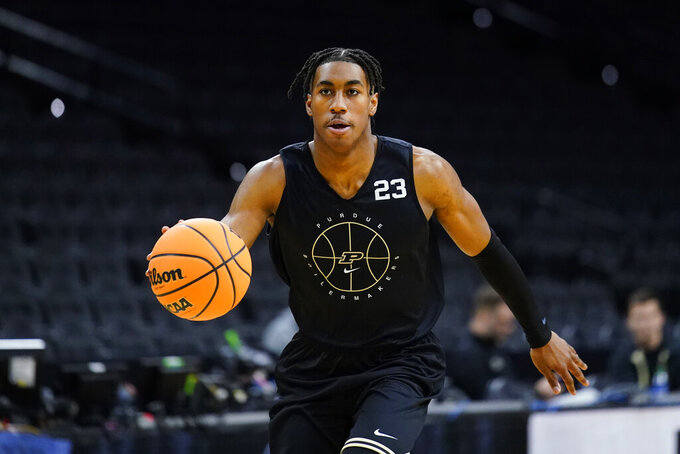 PHILADELPHIA (AP) — These teams need no introduction. Built by coaching icons John Wooden and Dean Smith, UCLA and North Carolina are as much a part of college basketball as the hardwood itself. Combined, the programs have been to 39 Final Fours and won 17 national titles.

These teams need plenty of introduction. Saint Peter's, a tiny commuter college in the shadow of the Big Apple, and Purdue, a perennial sleeping giant in the Big Ten, are also on March Madness runs that few outside their own zip codes imagined when the brackets came out.

On Friday, fourth-seeded UCLA plays eighth-seeded North Carolina and No. 3 Purdue meets Saint Peter's, which is trying to become the first 15 seed to advance to a regional final. One of these teams will emerge from the East for a trip to New Orleans and the Final Four.

“Everybody on our team has a chip on our shoulder,” said Peacocks guard Doug Edert, whose wispy mustache now has a Twitter account. “We're always trying to prove ourselves as a program, as a basketball team.”

But Saint Peter's will hardly be alone in that respect over the next three days in Philly.

The fact that none of these teams — not the bluebloods, not Purdue and certainly not the Peacocks — came into this tournament as a trendy pick provides yet another example of why, exactly, the NCAA Tournament is the most-compelling event on the American sports calendar.

For all its history and pedigree, North Carolina was a team on the bubble through most of 2022.

That win blew a huge hole in one of the season's most enduring story lines — Coach K's retirement party. But very little has gone to script this season in Chapel Hill. After a rough start, the Tar Heels (26-9) find themselves two wins away from the program's record 21st Final Four.

“I don't think we really go into any game thinking any team we're playing is better than us,” said UNC big man Armando Bacot.

UCLA (27-7) is shooting for its 20th Final Four (officially, 19th, since the NCAA vacated the 1980 appearance). Most of those came during the Wooden dynasty of the 1960s and '70s when the Bruins won the first 10 of their 11 titles. The last Final Four trip came last season. UCLA was an 11th seed and took undefeated Gonzaga to the buzzer and beyond.

It took a bank shot from just inside half court with no time left in overtime to knock out the Bruins. Most of that team is back, but UCLA has spent a lot of this season dealing with injuries and playing in the shadow of Arizona, the Pac-12 champions who are top seeded in the South and account for two of UCLA's seven losses.

Now, comes a matchup with North Carolina — the 14th overall meeting between two of the country's most storied programs. North Carolina is 1-1 against the Bruins in the tournament. The loss came in a Smith vs. Wooden coaching showdown in the 1968 title game.

“I know all about the Carolina way. I have great reverence for their program and the history of their program," Bruins coach Mick Cronin said. “But every time I turn left on Sunset (Boulevard), I pinch myself. A guy like me, you're coaching at UCLA, then you're coaching in a game like this, it's cool.”

Both by seeding and by the odds, Purdue is the region's favorite to make it to New Orleans. The Boilermakers (29-7) are, in some ways, a throwback to the way things used to be.

Behind the size of 6-foot-10 Trevion Williams (11.9 points, seven rebounds a game) and 7-4 Zach Edey (14 and 8), they play inside out. A lot of the outside action goes to Jaden Ivey (17 and 4). Two of the team's four double-digit scorers are seniors. None are freshmen.

It is Purdue — not Michigan, Michigan State or Indiana — that has won more Big Ten regular-season titles than anyone (24). But the Boilermakers haven't been to the Final Four since 1980 — when Joe Barry Carroll played in the middle and coach Gene Keady was still at Western Kentucky.

Matt Painter took over when Keady retired in 2005. This is his sixth trip to the Sweet 16.

“He is 100% bought into the idea that if we do things a certain way, then we're going to be a team that is very hard to deal with,” Purdue athletic director Mike Bobinski said.

While Purdue has long envisioned a path here, Saint Peter's (21-11) has been on a different road.

On Feb. 12, the Peacocks were 12-11 and going nowhere in a conference that, essentially, had one headliner: Iona coach Rick Pitino. But Iona lost in the opening round of the Metro Atlantic Athletic Conference tournament. Meanwhile, Saint Peter's, coached by former Seton Hall guard Shaheen Holloway, has reeled off nine straight wins.

“What we’re doing right now is going to go down in history,” said Daryl Banks III, the leading scorer in a rotation that goes 10-deep. “But like we’ve said earlier, we’re not done yet. Once it happened, the next day we're moving past it.”

Jaime Jaquez Jr. of the Bruins twisted his ankle in the win over Saint Mary’s last week. Jaquez termed himself “day-to-day” at the Thursday media availability. Cronin said Jaquez certainly would try to play, but “the more important thing is, can he be effective?”

Painter, who played guard for Purdue from 1989-93, said scouting Saint Peter's reminded him of something Keady used to tell him: “My college coach always said good players can be in two places at one time. I realized then I wasn’t a very good player.”