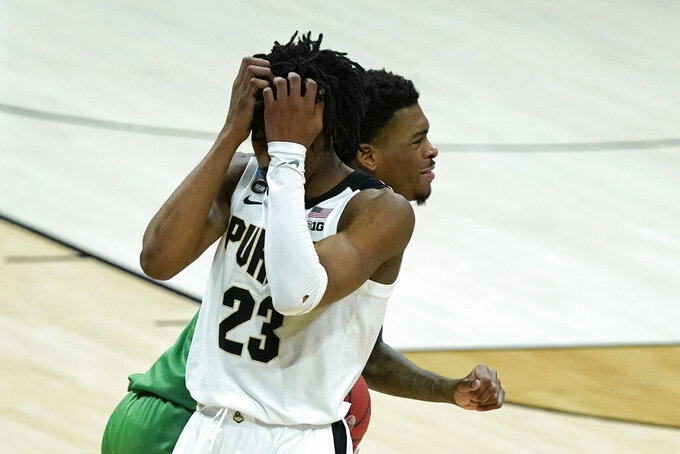 The Big Ten hasn’t started out the NCAA Tournament looking nearly as imposing as it seemed throughout the regular season.

Ohio State is already gone. So is Purdue. Michigan State couldn't make it out of the First Four.

Those three results all were decided in overtime but still raised at least a little suspicion about the strength of the Big Ten, which led all conferences with nine NCAA Tournament bids.

“We had a great year this year as a conference,” Purdue coach Matt Painter said Friday night after the Boilermakers’ 78-69 loss to North Texas. “From one to 14, it was obviously the best conference. Obviously when you do that and get the most teams in, and then you have some really close losses, people want to push back and say, ‘Well, you didn’t maybe have quite the year that you thought.’ No, we had as great a year as a conference. You’re one point away in three different games from winning, and you don’t win.”

This certainly represented a disappointing start for the Big Ten as it chases its first national title since Michigan State’s 2000 championship. Maryland won the NCAA Tournament in 2002 but was still an Atlantic Coast Conference member at the time.

The Big Ten’s nine tournament invitations were the most in league history and just two behind the Big East’s record of 11 in 2011.

Michigan State’s exit wasn’t particularly surprising. The Spartans had to rally late in the season just to earn a spot in the First Four, where they blew a double-digit lead in an 86-80 loss to UCLA.

But the losses by Ohio State and Purdue were stunning.

Seeded second in the South Region, Ohio State fell 75-72 to Oral Roberts. The Buckeyes had 17 more rebounds than Oral Roberts but shot 5 of 23 from 3-point range and committed 16 turnovers.

Oral Roberts became just the ninth No. 15 seed to win a first-round game. The last 15 vs. 2 upset also involved a Big Ten team, when Middle Tennessee beat Michigan State in 2016.

Purdue erased a nine-point deficit in the final eight minutes of regulation but allowed North Texas to score the first 11 points of overtime. Purdue had been the No. 4 seed in the South.

The news wasn’t all bad for the Big Ten.

Illinois, the Big Ten Tournament champion and top seed in the Midwest, breezed to a 78-49 victory over Drexel.

Wisconsin and Rutgers also advanced by beating higher-seeded teams from the Atlantic Coast Conference, a league that had a lackluster regular season and is 1-4 thus far in the tournament. Wisconsin trounced North Carolina 85-62. Rutgers beat Clemson 60-56 for its first NCAA Tournament victory since 1983.

After his Badgers won for just the third time in their last nine games, Wisconsin coach Greg Gard said the demands of the Big Ten helped prepare his team for the tournament.

“Obviously our league has been phenomenal and it was such a grind to go through, specifically the schedule we had down the stretch,” Gard said. “The schedule maker must not like me or us. But it prepared us and it tested us as we came down the stretch of the Big Ten, and thankfully it prepared us for this, and being ready to take steps forward at the end of the year.”

Three more Big Ten teams play Saturday when Iowa faces Grand Canyon, Michigan meets Texas Southern and Maryland matches up with UConn. Michigan is the top seed in the East, while Iowa is seeded second in the West.

History indicates it’s too early to write off the Big Ten’s chances of ending its championship drought after this tough start.

When the Big East earned 11 NCAA bids back in 2011, only two of its teams made it to the Sweet 16. But one of those teams was UConn, which went on to win the national title.