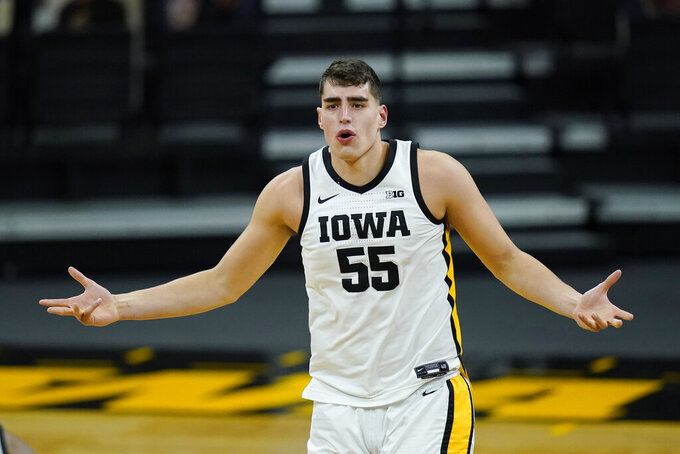 GAME OF THE WEEKEND: No. 1 Gonzaga vs. No. 3 Iowa in Sioux Falls, South Dakota. If you like offense, this is your game. Iowa and Gonzaga are the top two teams in the Kenpom.com offensive rankings, with the Hawkeyes averaging 118.9 points per 100 possessions and the Zags 117.7. Iowa's Luka Garza will go against Drew Timme in a matchup of the nation's top big men. It will be interesting to see how Gonzaga comes out of a long layoff. The Zags have had five games called off since Dec. 2 because of COVID-19 issues, including a 1-2 matchup with Baylor.

LOOKING AHEAD: No. 19 Rutgers passed its biggest test to date Monday with its first road win against Maryland since joining the Big Ten in 2014. For the first time since 1934-35, the Scarlet Knights have won their first five games by double-digit scoring margins, and they have star power in Geo Baker, Ron Harper Jr. and Myles Johnson. Their next two games will be telling, at home against No. 13 Illinois on Sunday and at No. 20 Ohio State next Wednesday.

PLAYER TO WATCH: Indiana's Trayce Jackson-Davis continues to build on his outstanding freshman season. The 6-foot-9, 245-pound sophomore forward has upped his scoring average to 21 points through six games, and he's pulling down almost nine rebounds per game and creating lots of second-chance opportunities. Davis will be challenged Saturday in the Hoosiers' Crossroads Classic game against a Butler lineup featuring lots of bulk.

INSIDE THE NUMBERS: No. 12 Wisconsin remains true to its identity as one of the top defensive teams in the nation. The Badgers lead the Big Ten in defensive efficiency, according to Kenpom.com, and are allowing only 59.8 points per game. They've led the conference in scoring defense three of the last five seasons, and Nate Reuvers recently became the program's career leader in blocks (157).

ON THE WOMEN’S SIDE: Katie Benzan is giving No. 14 Maryland as much as it could have hoped for after she joined the team as a graduate transfer from Harvard. The 5-foot-6 guard was a three-time All-Ivy League first-team pick who skipped her senior season at Harvard with the intention of transferring to Texas. She changed her mind and signed with the Terrapins after Texas fired Karen Aston in April. Benzan is averaging a team-leading 18 points and leads the Big Ten in 3-point shooting at 56.1% (23 of 41) through five games.

The story has been corrected to clarify Rutgers' 5-0 start is the first time each win has been by double-digits.

4 minutes ago
60 minutes ago
By Eric W. Bolin an hour ago
By Dave Skretta 2 hrs ago
2 hrs ago