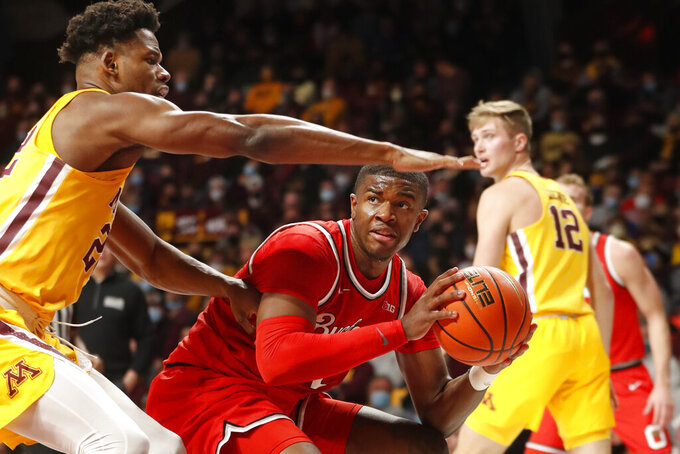 GAME OF THE WEEKEND: No. 16 Ohio State at No. 6 Purdue, Sunday. This is the only regular-season meeting between teams in the thick of the conference race. Purdue won two of three against the Buckeyes last season, with one decided in overtime and all by single digits. The Buckeyes (13-4, 6-2), like every team, will have their hands full dealing with the 7-foot-4 Zach Edey and and 6-10 Trevion Williams. After this, the Buckeyes have only two games left against opponents currently ranked. This would be a big hurdle to clear for Purdue (17-3, 6-3), which still must play at Michigan State and Wisconsin and at home against Illinois.

LOOKING AHEAD: No. 24 Illinois' one-point win over No. 10 Michigan State on Tuesday was its first in three games and a confidence booster because it happened with Kofi Cockburn out a second straight game (concussion) and Andre Curbelo out with COVID-19. The Illini (14-5, 7-2) are tied with Wisconsin for the league lead and enter a crucial stretch with five of their next seven on the road, starting Saturday at Northwestern.

PLAYER TO WATCH: Michigan's Hunter Dickinson is on quite a roll since the calendar flipped to 2022. Before foul trouble marred his Wednesday outing against Northwestern, he had three straight 20-point games — and that's in spite of a case of COVID-19 that caused him to miss a game. The Wolverines (10-7, 4-3) need the 7-1 sophomore at his best again when they play at Michigan State (15-4, 6-2) on Saturday. His recent back-to-back performances against Maryland and Indiana were his best of the season. He didn't just control the post, the big guy flashed his shooting touch by going a combined 4 for 6 on 3-pointers.

The Big Ten has five teams ranked in the AP Top 25, tied for the most among all conferences, and eight of the top 42 teams in the NET rankings. ... Indiana was 10 of 13 on 3-pointers against Penn State on Wednesday. It was the Hoosiers' best performance on at least 10 makes since the 2002 NCAA Elite Eight win over Kent State when the Hoosiers were 15 of 19. ... Rutgers' 68-60 loss to Maryland on Tuesday was the Scarlet Knights' first at home since Nov. 22.