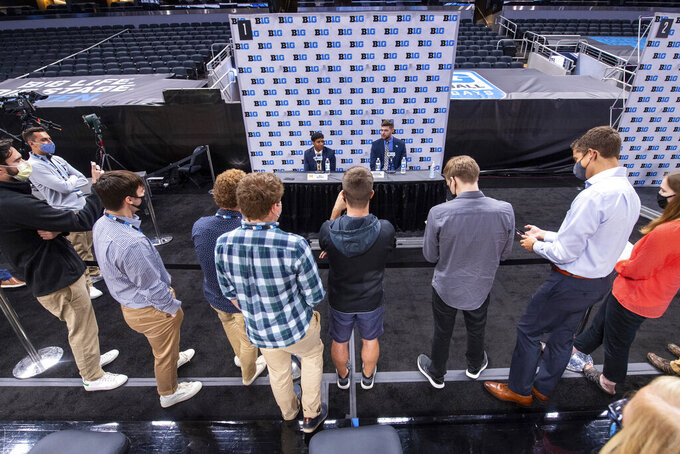 INDIANAPOLIS (AP) — When Big Ten basketball returned to Indianapolis on Thursday, it seemed like a whole new world.

Players talked about how the extra money has helped.

Transfer talk was no longer taboo, the men's and women's teams shared the stage — on the same day and at the same time — and everyone seemed relieved to see the first of two media days held in person.

“This is my first basketball media day," said Big Ten Commissioner Kevin Warren, now in his third year on the job. “I was a college basketball player. I love college athletics, every sport. But I adore basketball. It’s good to be back in the arena here."

Rather than holding the traditional tip-off festivities near conference headquarters in suburban Chicago, league officials moved the event to Gainbridge Fieldhouse, the site of both Big Ten tournaments and the same venue where Warren announced the 2019-20 men’s conference tournament had been canceled.

Players and coaches are ready to perform in front of full houses again after playing most of last season in front of nearly empty arenas. Five of the 28 men's and women's teams will have new coaches, four of whom are people of color.

The more dramatic changes might arise between two issues that could change the sport — NIL deals and roster management.

When NCAA officials opened the door for athletes to profit off their celebrity and compete immediately after transferring, coaches started rethinking how they did business.

While some, such as Illinois coach Brad Underwood, preferred taking a hands-off approach to the NIL deals, others, such as Iowa women's coach Lisa Bluder, seem fully aware of every offer coming in.

But all of the coaches agreed — this is better for the athletes.

“It’s about time it’s happened for our student-athletes," Michigan coach and former Fab Five star Juwan Howard said. “I just hope with the new NIL that it’s not taken advantage of, people aren’t taking advantage of our young men and women.”

Illinois center Kofi Cockburn is a perfect example of who can benefit. The first-team, all-conference selection decided to return for his third season only after passing up the chance to leave for the NBA and turning down other offers to transfer.

The payoffs came Monday when Cockburn and more than 20 others Illinois athletes signed an endorsement deal with T/CCI Manufacturing in Decatur, Illinois, to promote manufacturing jobs. Financial details were not immediately available but every dollar helps and T/CCI is already promoting #CoolLikeKofi and designed T-shirt with the phrase.

“It’s definitely a plus," Cockburn said. “I know college athletes are really appreciative of this opportunity all over the world. I know I am. It’s a great thing that’s going on. It’s a step closer to what we can achieve."

After a breakout freshman season, Iowa guard Caitlin Clark spent this summer leading the Americans to the FIBA U19 world championship in Hungary and was named the tourney's MVP. When she returned home, Clark found she also was in high demand for NIL deals.

Coaches, meanwhile, are learning how to deal with a different recruiting tool — the transfer portal.

More than 2,000 players entered the portal last season, a number Maryland coach Mark Turgeon believes will shrink quickly in the coming years. But Turgeon and other coaches are convinced the less-inhibiting transfer rule will alter how they build programs.

“It’s certainly here to stay," Ohio State coach Chris Holtmann said. “I think you’ll see less programs recruit freshmen every year. I think more teams will wait until the spring. It does probably allow you to potentially rebuild quicker than maybe the traditional way used to be for certain programs."

Now it's time to see if the altered landscape will change the projected pecking order in a vastly different season.

“We’re really excited our guys get back to some normalcy," Rutgers coach Steve Pikiell said. “I do like it when we go to concerts, when they go to football games, they’re able to kind of get away from basketball at times. I’d also remind them of the challenges in this league."