A bigger bracket? NCAA transformation could lead to changes 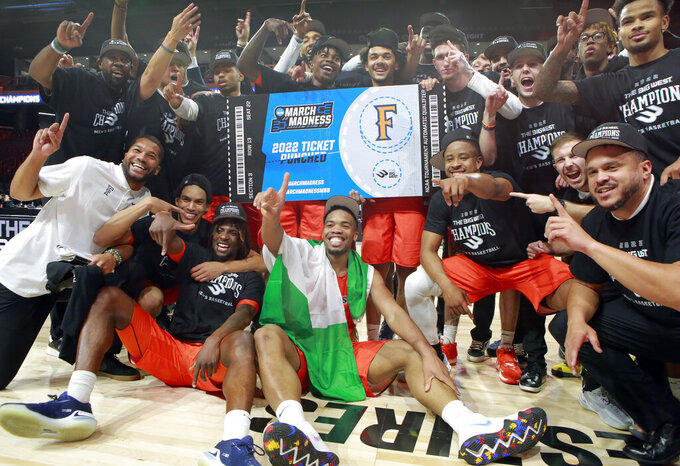 College sports leaders are working to transform the top tier of NCAA athletics, from how Division I should be governed to what should be required of schools to compete at the highest level.

Changing the NCAA could lead to changes in its crown jewel event — the Division I men’s college basketball tournament, the lucrative three-week, 68-team joyride that has become an American sports institution.

How about an expanded bracket? Or more play-in games — just don’t call them play-in games — and fewer opportunities for the small schools to upset the traditional powers?

How does an NCAA Tournament with all 351 D-I schools sound?

“You could have an all-comers tournament with just one more weekend,” Big 12 Commissioner Bob Bowlsby said. “I think it’s an idea that might have the nuggets of compromise that could be satisfactory.”

The men's field of 68 for March Madness was set Sunday night. The games begin with a First Four appetizer on Tuesday and Wednesday before the basketball bonanza commences Thursday across the country.

To be clear: The NCAA's Division I transformation committee, a group of 21 administrators and university presidents co-chaired by Southeastern Conference commissioner Greg Sankey and Ohio athletic director Julie Cromer, has not been tasked with remodeling March Madness.

The committee's charge is far broader, tackling issues such as membership requirements, governance and what the NCAA calls the “student-athlete experience.” They are expected to return a report to the Division I Board of Directors in August.

Buried beneath the bureaucracy are a few essential questions that will determine the not-so-distant future of March Madness: What schools should be in Division I? Can schools with massive disparities in athletic budgets and resources continue to compete against each other for national championships? If so, what type of access to championship events should schools from conferences that have no realistic chance to win them receive?

And, of course, there is a question of money. The Division I men's basketball tournament accounts for most of the NCAA's more than $1 billion in revenue, with the payout projected to be about $870 million in 2022. That revenue funds NCAA operations and championship events in dozens of other sports and about $670 million is set to be distributed to the schools through conferences.

How that pie should be divided in the future will no doubt be a point of contention. For basketball fans, the most obvious changes would be how the size of the bracket and who gets in.

Currently, each of 32 Division I conferences receives an automatic bid for its champion. The majority of those conferences, from the American East to Western Athletic, usually get just their automatic qualifier into the field, access that also comes with several million in revenue. Last year, one unit earned for making the NCAA men's tournament was worth $2.02 million paid out over six years.

That's not a much for a Power Five league such as Bowlsby's Big 12, the SEC or Big Ten, which have media rights deals worth billions based mostly on their strong football programs. For smaller conferences, that money is significant.

“There are a lot of leagues and a lot of schools that are going to fight to the death to keep their access,” Bowlsby said.

While those mid-major conference schools are mostly one-and-done in the tournament, the occasional upsets fuel the excitement of the opening weekend. The teams that pull them off such as UMBC, Oral Roberts and Florida Gulf Coast get to bask in the national spotlight for a few days and carve out a place in college basketball history.

And regardless of the results, simply getting the opportunity to compete against the teams that play most of their games on TV is a reward for the athletes who don't.

“They wanted that opportunity. They wanted that stage,” said Stony Brook athletic director Shawn Heilbron, who was with the school in 2016 when the Seawolves won the America East and played Kentucky in the first round. The Wildcats won 85-57.

The power conferences, and in basketball that includes the Big East, typically earn the bulk of the at-large bids determined by the NCAA selection committee. In this year's field, those six leagues received 29 of 36 at-large bids.

Gumbart said if those conferences want more of their teams in the tournament the simplest solution is to add more at-large bids.

“I don't believe we’ll do away with AQs. I just don’t think it’ll happen,” Gumbart said. “Some people might want to do that, but I don’t believe that’s healthy for the broader aspect of what we’re trying to do in college athletics.”

When the field expanded to 68 teams in 2011 the First Four was created. The games played on Tuesday and Wednesday in Dayton, Ohio, include two matchups of automatic qualifiers trying to enter the main bracket as 16 seeds and two at-large selections deemed 12 seeds.

While fans often call the First Four a play-in round, the NCAA goes to great lengths to push back against that.

“This is where Dayton, I think, has been fantastic,” Patriot League Commissioner Jennifer Heppel said. “It’s the experience. It's playing on that court with the (March Madness) branding. The newness, with the NCAA logo, with the spotlight.”

“So what if we had four more Daytons?” she added.

But does that kind of expansion lead to more games matching mid-major automatic qualifiers, decreasing the number of opportunities for Cinderella to make an appearance at the big dance?

“Should it be sort of more of a play-in where the lower seeds play each other and the better seeds come in later in the tournament? Maybe that’s the right model if the tournament is expanded,” Big East Commissioner Val Ackerman said.

The current NCAA TV deal with CBS and Turner runs through 2032 and any alterations for the tournament would need buy-in from those partners. But a bigger tournament would almost certainly bring in more revenue. That doesn't necessarily mean it would be distributed the same way going forward.

One of the benefits of playing in the First Four is a victory pays the same unit price as advancing in the 64-team portion of the bracket. There is no guarantee that stays the same going forward.

“I could see there potentially being perhaps a multiplying effect that the later rounds have greater weight,” said Greg Shaheen, a former NCAA executive who spent six years in the early 2000s modeling expanded brackets going all the way up to 96 before the NCAA decided to make a small jump to 68, starting in 2011.

“The bottom line is we have more than 64 teams because the big five conferences did not want to give up one single at-large,” he said.

Still, Shaheen said in his experience the power conferences valued the big-tent approach to the NCAA Tournament and a diverse field of schools. He doubts those at the top of college sports' food chain have a great desire to do something drastically different, leaving the little guys behind.

But varying priorities within Division I can lead to odd choices, Shaheen said.

“Membership sometimes brings about change that is not logical and, quite honestly, can adversely affect the product," he said. “The issue is that in a collective of that many perspectives, you wind up with some things that don’t make a lot of sense.”