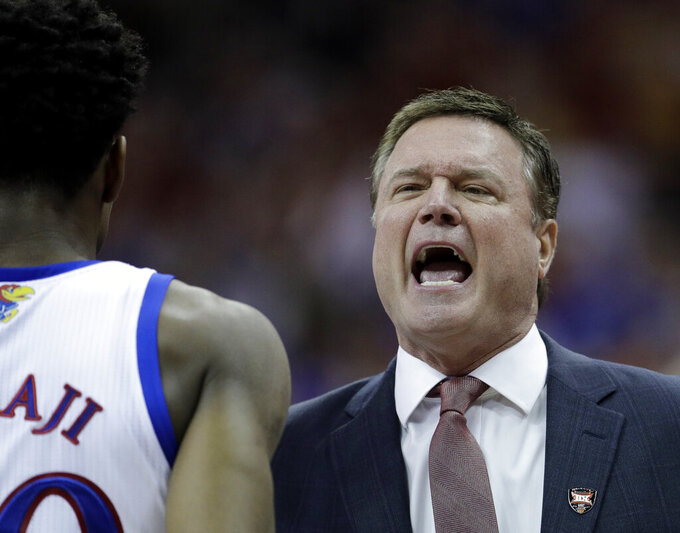 Kansas coach Bill Self talks to players during the first half of the team's NCAA college basketball game against Iowa State in the Big 12 men's tournament final Saturday, March 16, 2019, in Kansas City, Mo. (AP Photo/Charlie Riedel) 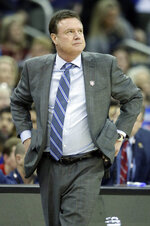 LAWRENCE, Kan. (AP) — Bill Self has taken three teams to the Final Four and won a national title, he has more Big 12 championship rings than fingers and a national coach of the year award sits in his office.

This season may have been his finest coaching job at Kansas.

Once the nation's No. 1 team, the Jayhawks had to juggle the distraction of an FBI investigation into apparel partner Adidas. They lost one of the nation's most dominant big men, Udoka Azubuike, to a season-ending wrist injury. Sophomore forward Silvio de Sousa was rendered ineligible by the NCAA and veteran guard Lagerald Vick left the team late in the season.

Yet the Jayhawks competed for the regular-season Big 12 title into the final week, reached the finals of the conference tournament and may be playing their best ball in months.

Despite starting four freshmen and playing lineups nobody ever envisioned.

"This is new for everybody," Self said after learning his team is the No. 4 seed in the Midwest Region, and will face Northeastern in the opening round Thursday in Salt Lake City. "The biggest thing will be to have fun and enjoy it. It's a reward for the guys doing a good job on every team throughout the season, and we will approach it that way and hopefully play free."

The Jayhawks provided glimpses early in the season what they could have been. They beat Michigan State to open the season, knocked off Tennessee on a neutral floor and beat Villanova in December, all part of an impressive 15-2 start to the season that had fans thinking national title.

Then the injuries began to mount.

Azubuike missed time with an ankle injury, then needed wrist surgery, and suddenly the twin-post lineups that Self had tinkered with all offseason were useless. So, Self switched tactics and began to employ a four-guard lineup, leaning heavily on a young and inexperienced backcourt.

That worked well enough until Vick left for personal reasons.

Now, the Jayhawks base their starting lineups on their opponent: Against big teams, they will start freshman big man David McCormack alongside power forward Dedric Lawson in a setup similar to what they ran at the start of the season, and they'll swap in sophomore Marcus Garrett and run four guards when the opponent is smaller and gets up and down the floor.

It's a unique situation given that Kansas usually dictates the way other teams want to play, but the reality is nothing about this season has been usual for the Jayhawks.

"We're definitely confident," said Lawson, their All-Big 12 forward who sat out last season after transferring from Memphis. "Just knowing that the guy beside you is not going to let you down, that everyone in the locker room is going to go out there and play to their best of their ability — no matter if shots are falling. Just competing is all you can ask for."

It's all Self has asked for all season.

He finally felt like the Jayhawks responded in the finals of the Big 12 Tournament, too. Shots weren't falling and Iowa State was running away from them, yet his young, cobbled-together lineup kept fighting until the last few seconds of the game.

"I'm more excited after watching them (against the Cyclones) than I have been all season," Self said. "We had nothing go well — nothing — and they battled their asses off for 40 minutes. Even though it wasn't pretty, I thought we did a lot of good things."

Yes, the Jayhawks' string of regular-season Big 12 titles ended at the hands of Texas Tech and Kansas State, a run of 14 straight that may never be matched. They fell short in the league tournament and were given their lowest NCAA Tournament seeding since 2006.

But given the adversity Kansas has faced this season, Self seemed downright buoyant on Selection Sunday. He seemed to relish the chance to face fifth-seeded Auburn or No. 12 seed New Mexico State in the second round, and the potential for a Sweet 16 trip to nearby Kansas City looms.

For once, Kansas is flying under the radar as it enters the NCAA Tournament. Widely overlooked, just like the job their coach has done this season.

"One of the announcers I was just texting said we were limping home," Self said, "and I can see how somebody could see that. ... But this team has won eight of our last 11 and that's after going through some stuff, and we're close to getting it even though we haven't quite gotten it yet. That tells me that there is still a great opportunity for our best to still be in front of us."