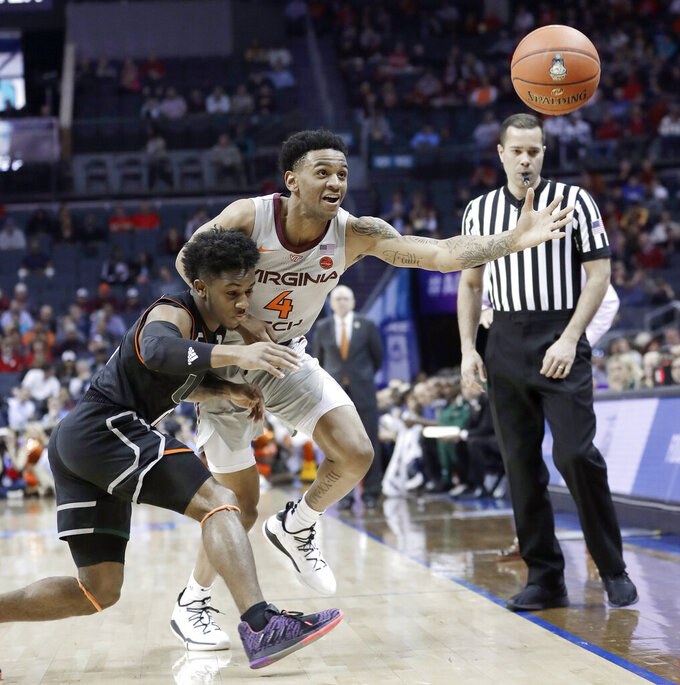 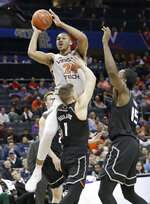 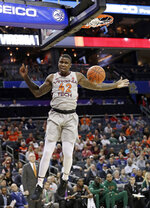 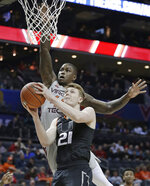 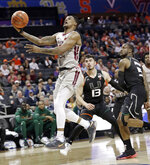 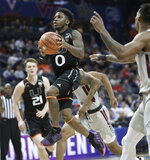 CHARLOTTE, N.C. (AP) — Ty Outlaw and No. 16 Virginia Tech got a quick offensive start. The Hokies didn't need a whole lot more to advance in the Atlantic Coast Conference Tournament.

Outlaw hit three 3-pointers during the Hokies' game-opening 11-point run and they never trailed in beating Miami 71-56 on Wednesday in the second round.

Kerry Blackshear had 19 points and 10 rebounds for the fifth-seeded Hokies (24-7). They ran out to a 20-point lead before halftime, then turned away Miami's last serious push early in the second half with a 20-5 run that drove the margin past 20 again.

"When you have teammates like ours, it makes the game a lot easier from the start, whether we're hitting or not, because everybody is a threat," Blackshear said. "We know that when somebody is hot, that's the person we're going to find.

"We know that each person is going to make the right basketball play for our team, whether that be taking their own shot, finding somebody else, setting a screen, anything like that."

The numbers sure looked good for Virginia Tech, which shot 50 percent and made 11 of 27 3-pointers to beat the 12th-seeded Hurricanes for a third time this season — all by double-figure margins.

Virginia Tech twice made at least five straight shots during the game.

"They move the ball extremely fast to basically four guards on the perimeter and a big guy who can really handle," Miami coach Jim Larranaga said. "All five guys shoot the 3. They spread you out.

"Their touches — where it's in your hand and out of your hand without dribbling — gives them a chance to get open shots. The defense can't move as fast as the ball can."

Chris Lykes scored 19 points for Miami (14-18) which never gave itself much of a chance by falling behind big from the jump and shooting just 34 percent.

Miami: The Hurricanes' first-round win against Wake Forest on Tuesday ensured they would win at least one game in the ACC Tournament in seven of Larranaga's eight seasons as coach. That turned out to be the only highlight in a two-day stay in Charlotte at the end of a frustrating season, which included never having 6-foot-11 forward Dewan Hernandez — who was ruled ineligible by the NCAA because of his dealings with an agent and ultimately left school to pursue a professional career. Larranaga has his first losing season since going 9-18 in his first year at George Mason in 1997-98, and he had won at least 20 games in six of his first seven seasons with the Hurricanes.

"It was very, very challenging to have only seven scholarship players available to us," Larranaga said. "It was very hard to prepare and practice properly. Because, amongst those seven players, they were dealing with injuries."

Virginia Tech: The Hokies won't have point guard Justin Robinson for the ACC Tournament as he continues to deal with a foot injury that has sidelined him since late January. That wasn't a problem in their tournament debut.

The 5-7 Lykes, Miami's leading scorer at 16.2 points, was helped off after he suffered a right-ankle injury when landing on a layup with 3:24 left. Larranaga said afterward that Lykes was getting an X-ray.

Larranaga said he was "hoping it's not bad, but I'm not optimistic."

Outlaw scored all 14 of his points in the first half, including the three 3s in the first 4½ minutes in a sign of how Outlaw says he's "ready to shoot whenever (teammates kick it out."

"If he has space and he has 10 toes to the rim, I think he's an elite level shooter," Virginia Tech coach Buzz Williams said.

Virginia Tech closed the regular season with a loss at Florida State followed by a home win against Miami. Now, after beating the Hurricanes, they're playing the Seminoles again.

The Hokies will face 12th-ranked and fourth-seeded Florida State in Thursday's quarterfinals.