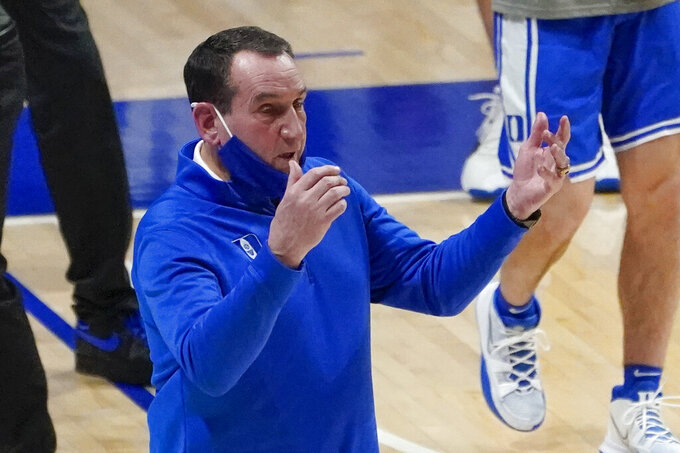 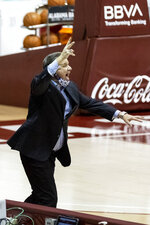 LAWRENCE, Kan. (AP) — Bill Self had never found himself in this position in nearly two decades as the head coach at Kansas.

Sure, there have been teams that have struggled to assimilate new players. Teams with deficiencies on offense or defense. He's had teams that flamed out the first weekend of the NCAA Tournament, despite having one-and-done prodigies on the roster.

But this is different. Entering the final week of January, the Jayhawks are staring at a stretch run in which they could be a nonfactor in the Big 12 race — the byproduct of both a brilliant rival in No. 2 Baylor and their own shortcomings.

“We're trying to gear ourselves up to have a storybook or a very happy end to our season and you can't do that unless you play well in the postseason," Self said. "The only thing that's changed is the disappointment being midway through your league play, you're already significantly behind your league leader, and they're probably not going to lose much, if any.”

It's a situation a lot of perennial powerhouses are facing as the calendar flips to February.

Duke, North Carolina and Kentucky are all facing the very real possibility of not making the NCAA Tournament and the last time that happened in the same year was 1974.

The Blue Devils (6-5) finally snapped their three-game losing streak with a win over Georgia Tech, but coach Mike Krzyzewski's team has struggled to incorporate their talented freshmen, they are still working Jalen Johnson into the mix after a foot injury and they rank 281st in field-goal percentage defense.

The Wildcats (5-10) have struggled to score. Their poor shooting combined with a penchant for turnovers has Kentucky in danger of their first losing season since 1988-89, when Eddie Sutton was in charge.

Don't talk to Tom Izzo about struggling to score. Michigan State (8-5) came back from a 20-day pause because of COVID-19 and was promptly walloped 67-37 by Rutgers — a team that had never beaten the Spartans.

“If you look across America, it could be any blueblood — any school at all — they have gone through this, some grind, dog-type days,” said Self, whose Jayhawks narrowly beat TCU to avoid their first four-game skid in 32 years. “The next big thing is the postseason. You're probably playing for seeding, if you're fortunate to get in — we're playing for seeding much more than in years past, because in years past we controlled our own destiny.”

There are plenty of reasons the bluebloods can point to for being beaten so often.

Most rely on one-and-done stars or, at most, two-year players who have a narrow window for reaching their ceiling in college. Duke's had 19 players leave after one season over the past decade, and most of the 21 lottery picks that Wildcats coach John Calipari has produced in the past 11 seasons have departed after their freshman or sophomore seasons.

Kentucky, arguably the most disappointing of the perennial powers, had the nation's consensus No. 1 class this season, yet another group of athletic freshmen joined by talented transfer Olivier Sarr.

The peril of relying on such youth has been underscored this season by COVID-19, though. Those newcomers missed out on a typical summer program, then had their handful of soft non-conference games largely wiped out. They instead got thrown into real games almost immediately, and many of them have struggled to adapt to playing at the college level.

“This has been a long journey and every team goes through it differently,” Krzyzewski said. “We have not had a positive case yet … knock on wood, but we’ve had interruptions. It’s long for anybody, but for a young group it’s really long.”

Indeed, the pandemic has caused havoc with teams trying to find their footing. That was evident in the performance by the Spartans against Rutgers, and by Kansas during a three-game skid that included a pair of unranked opponents; the Jayhawks had a potential get-right game against lowly Iowa State postponed in the midst of it.

The Jayhawks matched a school record for margin of defeat in Allen Fieldhouse when Texas walloped them by 25 earlier this month, which brings up another point: Most schools are allowing few, if any, fans into the building, and that deprives some of college basketball's heavyweights of the typical advantage they have playing in the Phog, Rupp Arena at Kentucky, the Breslin Center at Michigan State and Cameron Indoor Arena at Duke.

There are more standard reasons for the struggles, too. Injuries is a big one. Johnson is finally back from his foot injury for Duke, and Terrence Clark has been out with the same problem for Kentucky. Kansas is without five-star freshman Bryce Thompson, who first missed time with a back injury and is now sidelined by a broken thumb.

One thing that has never changed? The intense focus on the bluebloods, especially when things are going poorly.

“It's pretty intense, what people say and do,” Kentucky assistant Bruiser Flint said. “The expectations are extremely high. I think sometimes they get a little crazy. But that's what you sign up for.”

One blueblood, UCLA, is doing fine at 12-3 so far this season. And there are plenty of reasons to believe its brethren are going through a temporary lull.

Each of the schools has another group of talented players arriving in the fall, with Kentucky and Michigan State both ranked in the top 10 for 2021 recruits by 247 Sports. Vaccinations have begun amid hope that next season will look a whole lot more like normal — and normal would mean college basketball's bluebloods back in the national title mix.

“Winning can camouflage your ills and sometimes losing magnifies them and we've been in a situation where they've been magnified," Self said. "We can't get back what we've lost but we can do everything in our power to put ourselves in a position to finish what we start.”