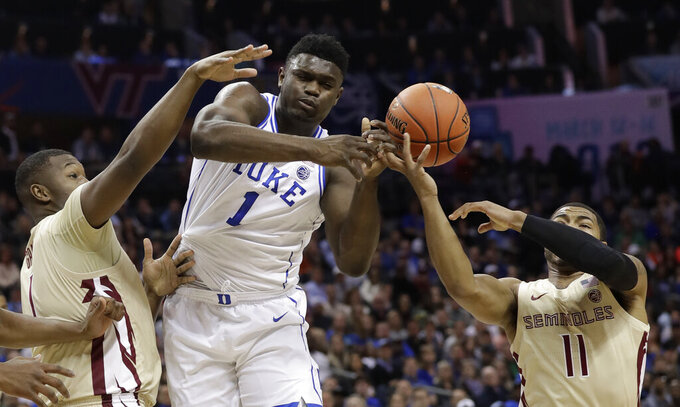 Duke's Zion Williamson, center, loses the ball as he is trapped by Florida State's David Nichols, right, and Raiquan Gray, left, during the first half of the NCAA college basketball championship game of the Atlantic Coast Conference tournament in Charlotte, N.C., Saturday, March 16, 2019. (AP Photo/Chuck Burton) 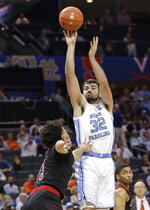 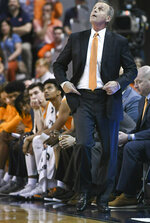 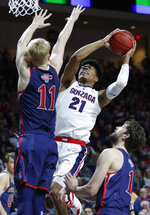 Figuring out how to stop them won't be easy.

Gonzaga joined the Atlantic Coast Conference trio of Duke, Virginia and North Carolina atop the four regional brackets, followed Michigan State, Tennessee, Kentucky and Michigan as No. 2 seeds. These eight teams have won 85 percent of their games this season. And nearly half of their games lost (18 of 40) have come against another team within this group of 1- and 2-seeds.

That makes for a tricky puzzle, though some clues may be in weaknesses that showed when these top-tier teams lost.

It starts with 3-point shooting and free-throw shooting, though the Blue Devils typically overcome both behind the brilliance of Williamson, fellow freshman RJ Barrett and a tough defense led by Tre Jones.

Duke shoots 30.2 percent on 3s, the worst mark of any tournament team and worst in program history. The struggles stood out in a loss to Syracuse (9 of 43 against the zone) and in losses to UNC (8 of 39 in the first, 8 of 32 in the second).

At the free throw line, 69 percent could be a problem for the Blue Devils in a close game. Barrett missed two free throws with 12.4 seconds left in the Atlantic Coast Conference Tournament semifinals, giving UNC a final-play shot for the win even though Duke ultimately won, 74-73.

Fans already know all about Virginia's worst-case scenario thanks to No. 16 UMBC trouncing the overall No. 1 Cavaliers in last year's first round.

This year's team plays similarly with a style that can reduce its margin for error.

Virginia again has the tough defense and methodical tempo offense, a combination that tests the discipline and patience of its opponent. Behind Kyle Guy, Ty Jerome and De'Andre Hunter, the Cavaliers own their most efficient attack since coach Tony Bennett's breakout season there in 2014.

If they struggle for stops and get behind, it can be difficult to reverse momentum with fewer possessions to work with thanks to their pace — illustrated in Friday's loss to Florida State in the ACC Tournament semifinals.

FSU played with an aggressive edge and shot 57 percent, increasing the pressure on Virginia's offense to offset those troubles. But the Cavaliers shot 42 percent and made 5 of 24 3-pointers as they fell behind, and they aren't built to score in bunches in a comeback bid.

That showed last year in the unprecedented UMBC loss, a game in which the Cavaliers fell further and further behind as history unfolded.

The Tar Heels have three scorers capable of big games with Cameron Johnson, Coby White and Luke Maye. And they're at their best when loose in transition or attacking the glass.

Things get tougher when the pace slows.

Despite its rebounding prowess, UNC lacks a true post scorer — a staple of Roy Williams' best teams — and can struggle matching up with bigger teams. And its perimeter strength makes the team more dependent on the 3.

In the Virginia loss, the Tar Heels couldn't push tempo, had season lows of 61 points and 76 possessions, and shot 9 of 30 from behind the arc. The trouble from 3 resurfaced in the ACC Tournament loss to Duke, with UNC making 1 of 12 after halftime while struggling to find consistent production off the dribble against Duke's perimeter pressure.

The Zags have KenPom's most efficient offense (125.1 points per 100 possessions) and a solid frontcourt with Rui Hachimura, Brandon Clarke and the return of Killian Tillie. Gonzaga is the only team to beat a fully-healthy Duke squad this year.

But the Zags struggled on the perimeter in the West Coast Conference Tournament title game against Saint Mary's. Their guards couldn't increase the tempo, so Gonzaga had to grind out halfcourt possessions and made just 2 of 17 3-pointers in the 60-47 loss.

The Zags also had trouble on the boards in their three losses. They were outrebounded in two, including by a 42-21 margin at UNC that saw the Tar Heels taking a 27-0 edge in second-chance points. They also surrendered 16 offensive rebounds against Tennessee in December.

ON THE SECOND LINE

Tennessee: Coach Rick Barnes has expressed concern about his team settling for 3-point shots instead of attacking the paint. The Volunteers attempted more 3-pointers than free throws in all five losses, averaging 23.4 attempted 3s and 16 attempted free throws in those games compared to 18.2 3s and 20.8 free throws in wins.

Michigan State: The Big Ten champions often struggle to keep possession. The Spartans rank 319th in the country in turnover margin (minus-2.6) and have averaged 15.8 turnovers in six losses, leading to an average of 16.5 points for opponents. The worst was a 24-turnover performance that led to 28 points for a 12-win Illinois team.

Kentucky: Can Kentucky hit more 3s if needed and stop opponents from doing the same? John Calipari's Wildcats made 199 3s — fewer than all but five power-conference teams — while attempting among the fewest in the country, and they hit just 27.9 percent in six losses (including 5-of-19 efforts against LSU and Tennessee ). At the other end, opponents shot 41 percent from 3 in Kentucky's losses.

Michigan: While John Beilein's Wolverines have one of the nation's top defenses, they haven't rebounded particularly well. Michigan has been outrebounded in five of its six losses by an average margin of more than nine boards per game — including being more than doubled (46-20) in the second of three losses to Michigan State.

AP Sports Writer Gary B. Graves in Lexington, Kentucky; and Steve Megargee in Knoxville, Tennessee, contributed to this report.