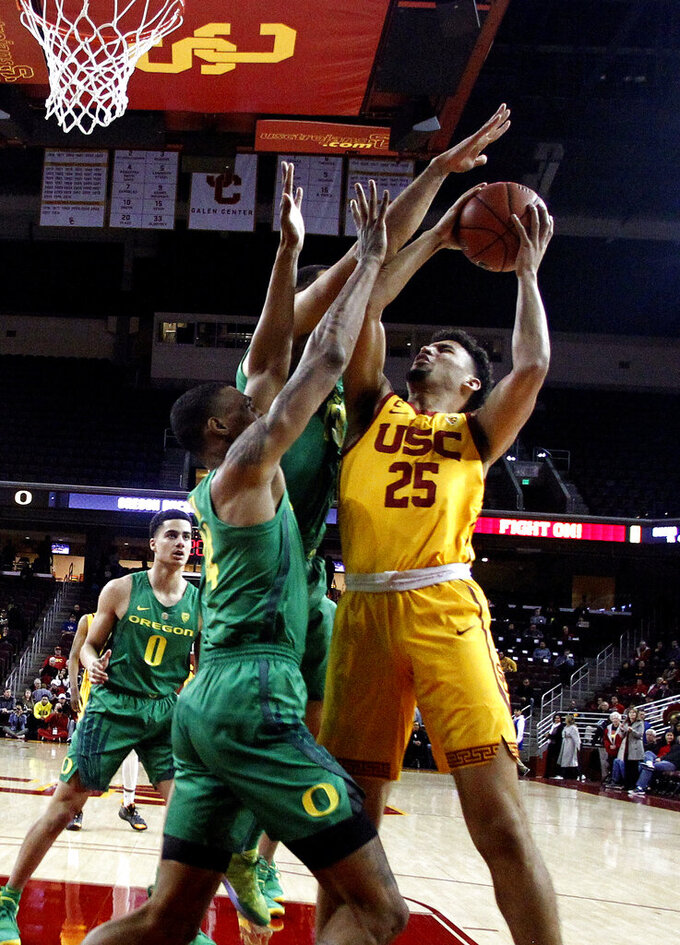 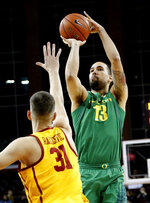 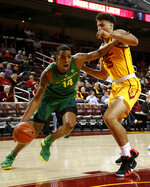 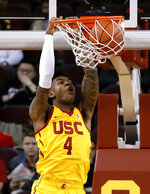 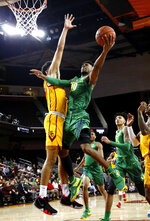 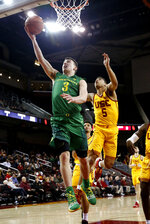 LOS ANGELES (AP) — It was a rare sighting Thursday, snow falling along the Los Angeles foothills. In downtown there was a much more common occurrence - Bennie Boatwright knocking down 3s.

The USC senior scored 20 points, all but two coming from beyond the 3-point line, to lead the Trojans to a 66-49 victory over Oregon.

"Bennie really killed us," Oregon coach Dana Altman said. "Him shooting the ball was the difference. Those six 3s really gave them separation."

Boatwright has been particularly hot of late from beyond the arc. In his last five games, he has made 24 of 39 3-pointers (61.5 percent).

"Bennie is shooting as well as he has in his career," USC coach Andy Enfield said. "His all-around game is good. He's feeling it. To beat Oregon, you need players to step up like that. It was fun to watch."

Center Nick Rakocevic added 17 points on 8-of-11 shooting, and like Boatwright, had six rebounds.

The Ducks never could crack USC's zone defense, going long stretches where they struggled to find the basket. Oregon went 1 for 12 in one stretch in the second half when the Trojans pushed their lead to 16 points (60-44).

"The ball movement wasn't there," Altman said. "We did have a lot of good looks, but we missed them and then started pressing."

USC, meanwhile, shot 62.5 percent in the second half.

The victory reversed an 81-60 USC loss at Oregon last month.

"They beat us pretty bad when we played up there, so it was a good game for us to get our revenge here and take care of business," Rakocevic said. "We had something to prove tonight. This was a statement game. We played really well, defended really well."

While the Ducks struggled to shoot from outside, they did not have any more success under the basket. USC outscored Oregon 30-18 in the paint and 14-7 on second-chance points.

Oregon is having particular problems shooting on the road. The Ducks shot 31.0 percent at Colorado, and in that one, the Buffaloes primarily played man defense.

"We just have to play better," Altman said. "Offensively we have to finish plays. Defensively we're still not connected. I thought we gave up some easy looks."

Freshman Louis King led Oregon with 16 points and Victor Bailey Jr. had 10 points off the bench.

Oregon: The Ducks thought they had turned things around after winning four of five games but have now lost two straight.

Rakocevic did not start in USC's two games last week, but returned to the lineup Thursday and was a force. He had two blocks to go with his six rebounds and 17 points.

"He had a good defensive game," Enfield said. "We outscored Oregon in the paint and Nick was a big part of that. That's what we expect of him. He's capable of doing that on a more consistent basis. Nick responded to being back in the lineup. He played with a lot of energy on both sides of the ball."

Oregon: Travels across town to play UCLA on Saturday.