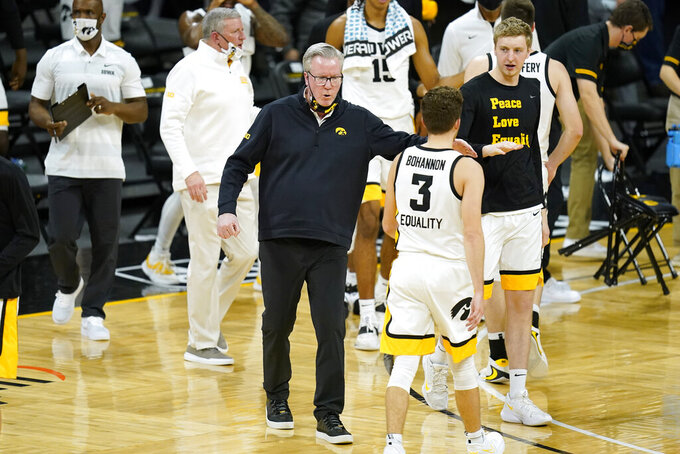 “Man, it’s been an unreal journey,” the senior guard said.

Coming off two hip surgeries that cost him almost all of last season, he knows what he's shooting for.

Bohannon tied a career high with eight 3-pointers and scored 26 points, and No. 5 Iowa beat Nebraska 102-64 on Thursday night. He made 8 of 12 3-point attempts but played just eight minutes in the second half as the Hawkeyes (19-7, 13-6 Big Ten) topped the 100-point mark for the fourth time this season.

It was the most points scored and the largest margin of victory in Big Ten play by an Iowa team since a 116-77 win over Northwestern in 1995.

Bohannon is Iowa’s career leader in 3-pointers in a career where he has dealt with numerous injuries.

“A lot of the work I’ve put in the last year and a half, there’s been a meaning to it,” Bohannon said. “I’ve put up a lot of shots through injury and rehab. It was huge to start off well and hit that many 3s tonight.”

“Any time you have a player get eight 3s in a game, it’s probably going to be a good thing for everybody,” Iowa coach Fran McCaffery said. “I thought he was tremendous moving the ball, defensively, and taking shots when he was open. Once he got going, we were looking for him and found him.”

Freshman Patrick McCaffery had a career-high 19 points for Iowa. McCaffery had scored just 21 points over the last seven games, but he was 8 of 13 from the field, including 3 of 6 in 3-pointers.

“It feels nice to get in a zone like that,” he said. “It felt like everything that I shot was going in.”

Luka Garza had 14 points for the Hawkeyes. The senior center, who came into the game second in the nation in scoring at 24.3 points per game, played just 24 minutes. Joe Wieskamp added 11 points.

“It’s a team that if you don’t play well, they embarrass you,” Nebraska coach Fred Hoiberg said. “And that’s what happened tonight.”

Iowa shot 51.4% from the field. The Hawkeyes had 16 3-pointers, the second-highest total this season.

“Our lack of energy on the defensive end was the thing that was so disappointing to me,” Hoiberg said.

Iowa closes the season at home against Wisconsin on Sunday. Bohannon knows it will be emotional.

“I wake up every day thankful for the opportunity I’ve been put in,” Bohannon said. “I’ve tried to make the most of every day I’ve got up to go to practice, to games. I’ll be forever grateful for that.”

Iowa guard CJ Fredrick, who has been dealing with a lower-leg injury since mid-January, fell to the court after committing a foul with 5:35 left in the first half. He grabbed his right ankle, and after being helped up, limped off the court. Fredrick did not play the rest of the game. Fredrick has missed four games and missed the second halves of two other games with the injury. “He’s a little bit sore,” Fran McCaffery said. “We’ll see how he is tomorrow.”

Iowa’s Connor McCaffery, third in the nation in assist-to-turnover ratio at 3.75, had eight assists against one turnover. McCaffery had seven assists and no turnovers in the first half. “It was just fun to watch,” Fran McCaffery said.

Iowa has won six of seven and stayed on pace to get a double-bye in the Big Ten tournament. The Hawkeyes are third in the conference, a half-game ahead of Purdue and one game ahead of Ohio State.

“We looked tired. We played tired,” Hoiberg said. “We do have to find a way to move on.”

Iowa: Hawkeyes play at home against No. 25 Wisconsin on Sunday.