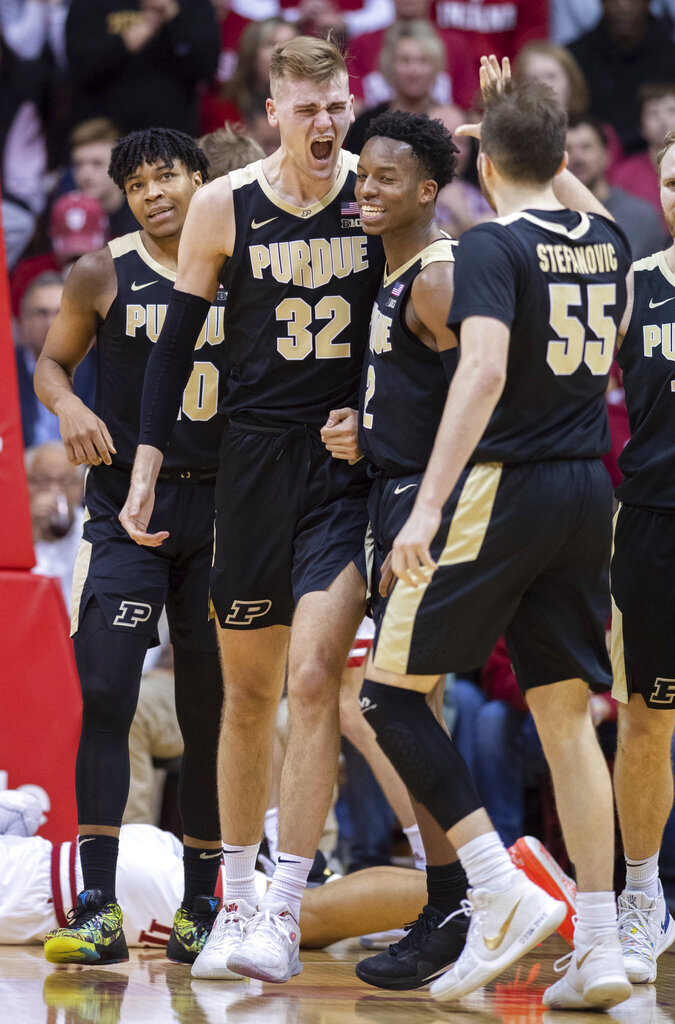 Purdue center Matt Haarms (32) reacts with his teammates after drawing a charging foul against Indiana during the second half of an NCAA college basketball game, Saturday, Feb. 8, 2020, in Bloomington, Ind. Purdue won 74-62. (AP Photo/Doug McSchooler) 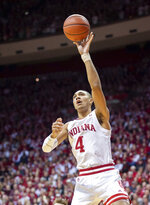 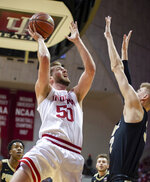 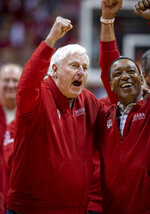 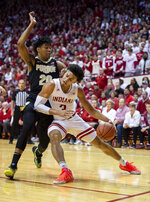 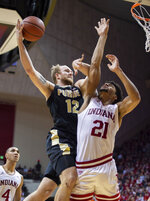 BLOOMINGTON, Ind. (AP) — Purdue finally figured out how to put together an impressive road show.

“Ïsaiah and Aaron between them are 5 for 5 (on 3s) so if you want to do something special and win at a place like Assembly Hall, you've got to have some guys step up and be special," Boilermakers coach Matt Painter said. “We were tonight."

They didn't have a choice.

The raucous crowd inside Assembly Hall started rocking early, in anticipation of seeing Bob Knight back on his home court for the first time in nearly 20 years.

Knight was introduced during a halftime ceremony along with former players, including members of the Hoosiers' 1980 Big Ten championship team.

But with Purdue's stifling defense forcing 14 turnovers and its offense showing signs of finally getting in sync, the Boilermakers (14-10, 7-6 Big Ten) could be on the verge of turning things around just in time for a postseason run.

They've won three straight overall, six in a row against the Hoosiers and now have back-to-back road wins after losing their first five in conference play.

“We just felt like mixing things up here the past two or three games, still running set but mixing in more motion (offense) doesn't get them sitting on every single thing. So hopefully we can catch them by surprise.”

Despite getting 16 points, eight rebounds and four assists from Trayce Jackson-Davis, the Hoosiers lost their fourth straight and their second in a row at home. Justin Smith added 11 points and five rebounds for the Hoosiers, who trailed the entire second half.

The Hoosiers responded with a 12-2 run, cutting the deficit to 56-50, but Purdue answered with seven straight points to put it away.

“Our turnovers in the first half really killed our momentum, and their run at the end of the half was really a deflating deal," Indiana coach Archie Miller said. “But Purdue deserves credit, they executed well."

Purdue: The Boilermakers seem to have found some solutions to their previous woes. They've reached the 60-point mark in three consecutive road games, winning two of them. And with four of their last seven at home, where they score 17.2 points more per game, they could be set up for a strong finish.

Indiana: After beating Michigan State three weeks ago, it appeared the Hoosiers might make a move. Instead, they've taken a step back. The offense struggled to get in sync Saturday and 10 first-half turnovers certainly didn't help. Now, after four straight losses, Indiana needs a quick turnaround.

Miller is old enough to remember Knight as a coach and what made his teams successful.

His players, maybe not so much. But they do understand the significance of having the winningest coach in school history inside Assembly Hall, wearing an Indiana basketball sweatshirt.

Indiana: Welcomes No. 17 Iowa to Assembly Hall on Thursday.

By Larry Fleisher 26 minutes ago
By Jim Hoehn an hour ago
an hour ago
By Hank Kurz Jr. 2 hrs ago
2 hrs ago