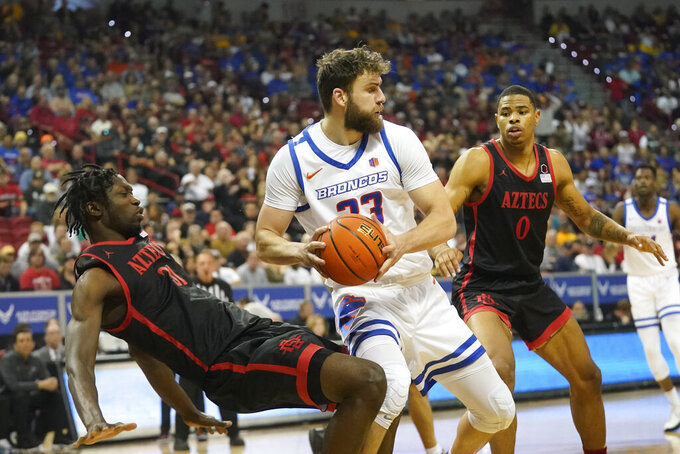 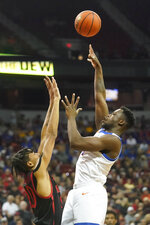 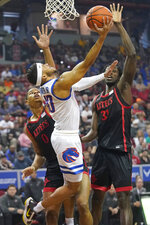 LAS VEGAS (AP) — Boise State works on the “perfect possession” every practice, where they have to get one stop and grab a rebound.

“We’ve done it so many times in practice," freshman Tyson Degenhart said, "that we just knew what to do when it came time to do it.”

San Diego State had the ball with 28 seconds left Saturday, but Matt Bradley and Trey Pulliam both missed shots before Boise State’s Emmanuel Akot grabbed the rebound as time wound down — and the Broncos defeated the Aztecs 53-52 to win the Mountain West Tournament and earn the conference’s automatic bid to the NCAA Tournament.

“We said one more stop and we’re the champions," Akot said. "And we did it. It was a great feeling.”

Degenhart, who led the Broncos (27-7) with 13 points, provided another pivotal moment late in the season half, when he took a charge on Pulliam under the rim with 2:48 left in the game. Boise State led by one at the time, and sending Pulliam to the line with a chance for the Aztecs to take the lead with have swung momentum.

Instead, Degenhart gave the Broncos a three-point lead, 53-50, with a bucket at the other end on the next possession.

“Whatever is needed, they step up and do, no matter who it is,” said Broncos coach Leon Rice, whose Broncos came into the tourney just 5-10 all-time and 3-7 in the quarterfinal round since joining the league in 2012. “And they find what’s needed and figure it out on the fly.”

Tournament MVP Abu Kigab scored 11 points and Emmanuel Akot added 10 for the Broncos, who became just the fifth team in Mountain West history to win an outright regular-season conference championship and the league’s postseason tournament. Boise State — which had made the semifinals just three times in 10 years, and had just one appearance there since 2015 — entered the tourney coming off their first outright regular-season conference title in more than three decades.

“I had space to just go down the lane and make a layup,” said Bradley on his last shot attempt. “I should have made it. I was right at the rim. I missed two earlier layups the same way. I should have made it, I got the rebound and Trey had a great look, too.

"We had two great looks at the end of it, but I definitely should have finished mine.”

It was the sixth conference tournament championship in the history of Boise State’s program.

Trailing by three at halftime, the Aztecs opened the second half with a quick five points to take a 30-28 lead. But the Broncos ended San Diego State’s mini-run and the teams began trading buckets while trading the lead seven times before Boise State took the lead with 6:41 left in the game and never looked back.

San Diego State, which has won the event a record six times, was in the final for the fifth straight season. The Aztecs have played for the tournament title in eight of the last nine years and in 12 of the last 14 seasons.

Boise State’s 27 total victories this season are a program record and their résumé could nab a top-seven seed in the NCAA Tournament. As of Saturday, the Broncos were 29th in the NET rankings. The Broncos have been to two NCAA Tournaments (2013 and 2015) during the Leon Rice era, earning the only two at-large bids in school history.

Boise State: Will play in the NCAA Tournament.