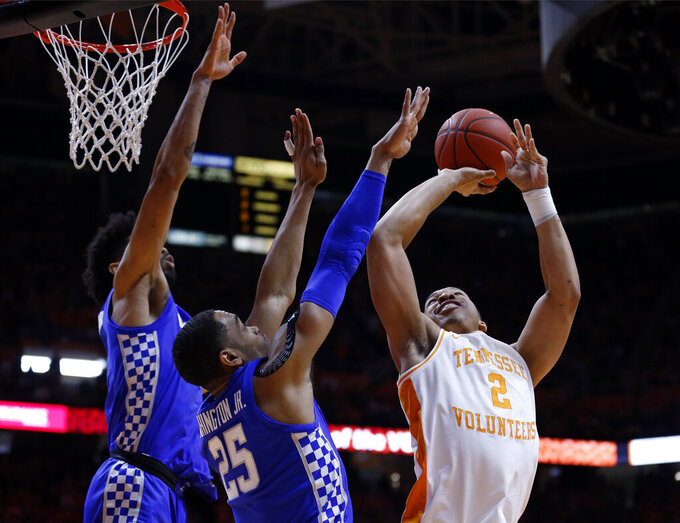 KNOXVILLE, Tenn. (AP) — Tennessee didn't like the way it got pushed around at Kentucky two weeks ago. The Volunteers pushed back in the rematch and delivered a knockout blow.

Jordan Bone scored a career-high 27 points and No. 7 Tennessee beat No. 4 Kentucky 71-52 on Saturday to maintain its home-court dominance. The decisive win came two weeks after the Vols fell 86-69 at Kentucky, a loss that snapped a school-record 19-game winning streak and dropped Tennessee out of the No. 1 ranking.

"The last game, they just manhandled us and they were the more physical team," Bone said. "You could just tell the way the game went, they just wanted it more.

"We don't ever want to go into a game or leave a game saying that about another team, they wanted it more than us. That's something we challenged ourselves with."

The Vols also beat Kentucky (24-5, 13-3) at home for a fourth straight year to delight a sellout crowd in the first regular season matchup of top-10 teams at Thompson-Boling Arena since the facility's 1987 opening. Tennessee is 4-0 at home against Kentucky under coach Rick Barnes.

"For us, it's always been about protecting our home court," said Tennessee's Grant Williams, who scored 24 points. "It's something that we take pride in."

Tennessee capitalized on the absence of Kentucky forward Reid Travis, who missed a third straight game with a sprained right knee.

"For us to win without Reid, we were going to have to play one of the best games in the last 10 years," Kentucky coach John Calipari said.

That didn't come close to happening.

Kentucky had its lowest point total since a 64-48 loss to Vanderbilt in the 2013 SEC Tournament. The Vols held Kentucky without a basket for a 9 ½-minute stretch in the first half and stayed in control the rest of the way.

PJ Washington scored 13 points but was the lone Kentucky player in double figures as the Wildcats lost for just the second time in 16 games.

"We got beat every which way but loose," said Calipari, who received a technical foul late in the first half. "Our young kids played like freshmen, played like deer in headlights."

The game went back and forth for the first 10 minutes, and a basket by Kentucky's Keldon Johnson cut Tennessee's lead to 17-16 with 10:23 left in the first half. But the Wildcats didn't get another basket until Jemarl Baker sank a 3-pointer with 51 seconds remaining in the half.

Kentucky missed 12 straight field-goal attempts as Tennessee went on a 17-4 run that was capped by an alley-oop from Williams to Jordan Bowden. Tennessee built a 37-24 halftime lead and remained in front by at least 13 throughout the second half.

Kentucky: Without Travis, Kentucky's frontcourt players struggled to stay out of foul trouble and couldn't contain Williams. Travis sprained his right knee in a victory over Missouri on Feb. 19. EJ Montgomery had filled Travis' spot in the starting lineup for wins over Auburn and Arkansas. Nick Richards got that assignment Saturday and made his first start since Nov. 23. Richards ended up with eight points and seven rebounds, while Montgomery had two points and five boards.

Tennessee: Barnes said this week Kentucky was tougher than Tennessee in the first matchup between these teams. That wasn't the case Saturday. Tennessee outscored Kentucky 28-10 in the paint and blocked five shots after having just one in the loss at Rupp Arena. One concern is the ongoing foul trouble of Kyle Alexander, who went scoreless and played just 12 minutes before picking up his fifth foul.

Former Tennessee coach Wade Houston and his son, former Tennessee and NBA star Allan Houston, received standing ovations as they were introduced during a timeout.

Kentucky is at Mississippi on Tuesday.