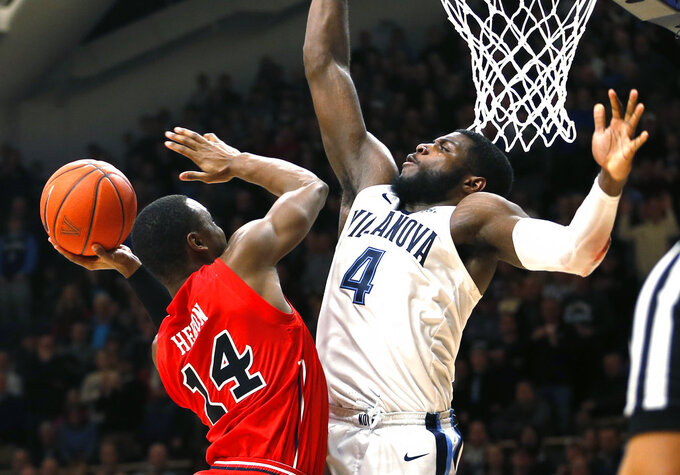 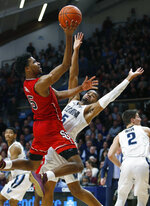 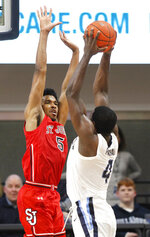 VILLANOVA, Pa. (AP) — Collin Gillespie snagged the final rebound and hugged the basketball as a couple of St. John's players took some last-gasp swipes at knocking it loose. Gillespie wasn't letting go and — after a sluggish start — Villanova just may be tightening its grip as the team to beat in the Big East.

St. John's coach Chris Mullin stripped his suit down to a white T-shirt at his news conference and conceded the path to a Big East crown still goes through the national champions.

Phil Booth has a pair of national title rings and continued his reign as king of the clutch shot for the Wildcats. He hit a go-ahead 3-pointer late in the game and scored 23 points to help Villanova rally to beat the 24th-ranked Red Storm 76-71 on Tuesday night.

The upstart Red Storm seemed poised to sit atop the conference with their best start since 1985-86 and a possible upset win (they were six-point underdogs) in their grasp. St. John's led by 13 in the first half and by 11 early in the second before a 3-point-happy offense went cold and rushed shot selection gave the Wildcats time needed to storm back and win.

Booth, who helped Villanova win its fourth straight game, has saved his best for the second half this season and delivered again in the clutch. He hit the bucket that pulled the Wildcats within one and connected on a 3 with 2:33 to go for a 68-67 lead they would not relinquish.

Shamorie Ponds had 23 points for St. John's (14-2, 2-2), the last on two free throws with 59 seconds left that got the Red Storm within 72-69. The Red Storm went nearly 4 minutes down the stretch without a field goal.

Perhaps the Red Storm of Mullin's first three seasons would have wilted on the road much earlier after squandering a 13-point lead. Led by Ponds, this year's team has the confidence and talent to shake off the slumps and attack. Ponds converted a four-point play to push the lead to eight and LJ Figueroa sank a 3 that kept SJU's lead at four.

The Red Storm came in rolling after a soft nonconference schedule that sparked them to their best start since the 1980s. St. John's used wins over then-No. 16 Marquette and Georgetown to break into the AP Top 25 this week for the first time in more than four years.

Mullin's fourth season has been his best and has the program thinking big: SJU athletic director Mike Cragg said this week he wants all Big East home games played at Madison Square Garden.

The Red Storm felt at home at the refurbished Pavilion and got the better of the Wildcats early in a 3-point shootout. Ponds hit one to help St. John's race out to a 20-7 lead. Ponds hit another 3 that stunted a Villanova run and St. John's made nine in the half for a 39-34 lead.

"We play them again. They come to New York," Mullin said. "It's all good."

St. John's had some small success last season, including a win over then-No. 1 Nova in Philadelphia. It was the Red Storm's second win over a top-five team in a week and first over a top-ranked team in 33 years. The Red Storm have to avoid any big upsets to make the NCAA Tournament for the first time since 2015.

Villanova had several members of its 1985 national championship team sit behind the bench. Mullin played for St. John's in '85 when it reached the Final Four and lost to its Big East rival. The Wildcats are still a national power and are meshing together after some early bumps.

Villanova was helped by a big edge at the free-throw line. The Wildcats made 16 of 22; Red Storm made 6 of 8.