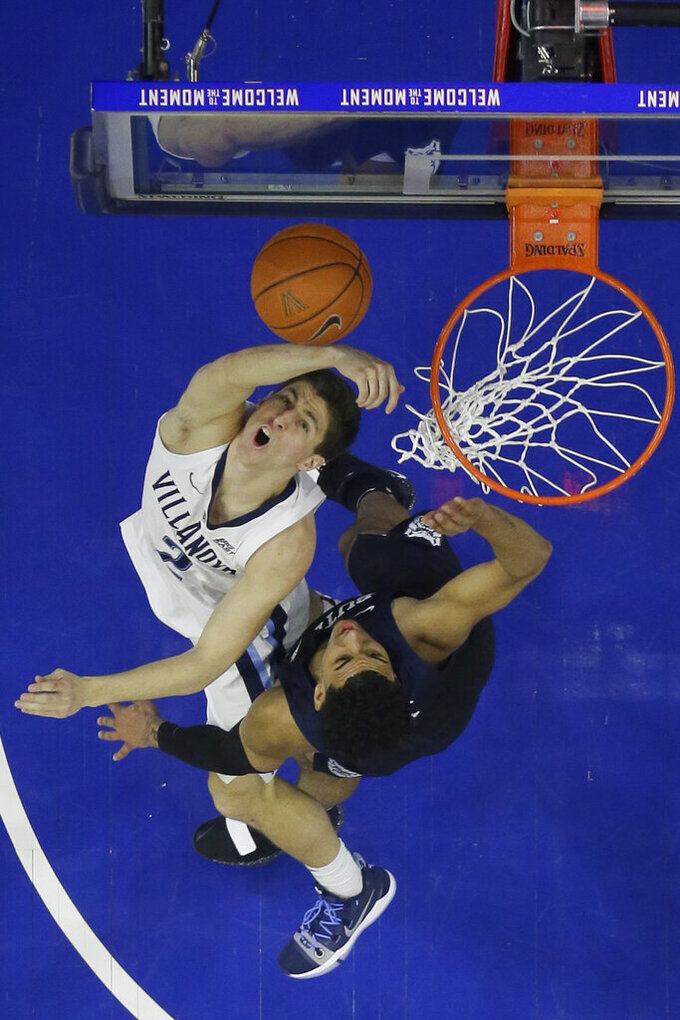 Villanova's Collin Gillespie, left, goes up for a shot against Butler's Jordan Tucker during the second half of an NCAA college basketball game, Saturday, March 2, 2019, in Philadelphia. Villanova won 75-54. (AP Photo/Matt Slocum) 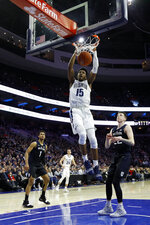 PHILADELPHIA (AP) — Phil Booth walked off the court for the final time in a home game with reminders everywhere how he helped turn the program into a national power. The scoreboard was lit with the point totals of another Villanova rout, a 20-point cushion built in large part by Booth's 3-point shooting. And in the rafters, two national championships that he helped the Wildcats win — what fan can forget the 3 at the halftime horn in 2016 against North Carolina? — and former teammates stopped by to salute the senior guard.

Booth has been the steady scorer in the most uneven of seasons for the Wildcats. If Booth wants to leave with a third Final Four on his resume, he'll need another Wildcat or two to step up and help him and Eric Paschall carry the scoring load.

"We're still learning how to play well together," Booth said.

The Wildcats are running out of time to figure it all out. But against Butler, Booth and Paschall were enough.

Booth scored 28 points and Paschall had 12 to lead Villanova to a 75-54 win over Butler in the home finale on Saturday.

The Wildcats (22-8, 13-4 Big East) could still win at least a share of the conference crown in a season where they have as many losses as the last two years combined. Villanova tumbled out of the AP Top 25 following a three-game losing streak, yet it is assured of earning no lower than a No. 2 seed in the Big East Tournament in two weeks in Madison Square Garden. Coach Jay Wright's program has won the last two Big East tourneys and three of four — oh, and the 2016 and 2018 national championships.

'We're just a work in progress," Wright said. "We shouldn't be at this point, but we are. Part of that's on us as a coaching staff, but I think we're going in a good direction. I like how we're playing right now."

The title banners (and one for 1985) were raised in the Wells Fargo Center, but not even the national champs could take center stage in Philly on Saturday.

Fans scrolled their phones and were still buzzing over the Phillies' record signing of free-agent Bryce Harper. Harper had just pulled on his pinstripe jersey and Phillies cap for the first time at a press conference in Clearwater, Florida when Villanova tipped off. The Wildcats weren't the 1A story in the city — they weren't even headline news in their own arena. Steph Curry and the Golden State Warriors were in town and set to play the 76ers hours after the final horn. With the fast turnaround time, the game was played on the Sixers' court instead of the one adorned with Villanova logos.

It took some time for Villanova to feel at home. The Wildcats missed six of their first seven shots and struggling Butler led early by nine.

Booth took control and buried a 3-pointer and converted a three-point play to give the Wildcats a 27-23 lead and they took off the rest of the way. Booth pushed the lead to 15 with a 3 early in the second half, and Paschall's thunderous baseline dunk got a rise out of fans on hand for the appetizer before the NBA's game of the night.

Villanova's search for a consistent third scorer goes on: Jermaine Samuels followed his 10 of 19 (5 3s) and 29-point outing in a win over No. 10 Marquette with just seven points against Butler. Saddiq Bey scored 11 points in a modest effort for the Wildcats.

"The tinkering has to end," Wright said.

The Bulldogs (15-14, 6-10) needed a win to remain in the NCAA Tournament picture and will pretty much need to win it all in two weeks in New York to have a shot at March Madness. Paul Jorgensen led Butler with 11 points. Butler had closed within eight late in the second half but couldn't sustain the run and Booth's fourth 3-pointer made it a 15-point game.

"We've had moments where we've looked like the team we want to look like, and for 20 minutes, I thought we were that," Butler coach LaVall Jordan said. "In the second half, that was not the case. It's just a little bit of soul searching to decide who we're going to be from this point out."

Villanova: F Cole Swider was in uniform for the first time since he broke his right hand on Jan. 17 and could add some depth if he can return for the tournament.