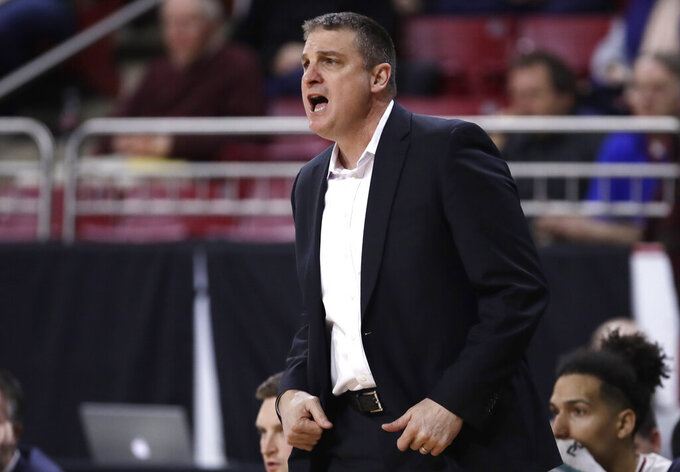 Boston College head coach Jim Christian calls to his players during the first half of an NCAA college basketball game against Louisville in Boston, Wednesday, Feb. 27, 2019. (AP Photo/Charles Krupa) 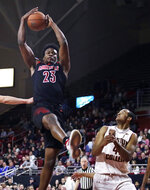 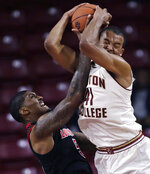 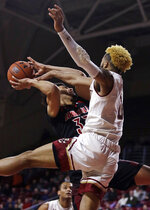 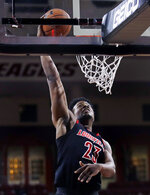 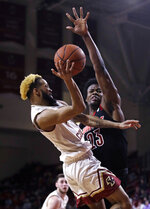 BOSTON (AP) — Louisville center Steven Enoch beat his defender and went up for the dunk, slamming the ball down with the full force his 6-foot-10, 260-pound body could muster.

But he was just a little off.

The ball banged off the back of the rim and flew all the way across midcourt.

Ky Bowman had 25 points, 12 rebounds and eight assists, hitting a 3-pointer with 2:31 to play to put BC ahead for good and the Eagles beat Louisville 66-59 for their first win over the Cardinals since the schools joined the Atlantic Coast Conference.

Enoch had a career-high 22 points for Louisville, which had been ranked as high as No. 15 in The Associated Press Top 25 on Jan. 28. The Cardinals (18-11, 9-7) have since lost to ranked teams North Carolina, Florida State, Duke and Virginia, but also unranked Syracuse and BC.

"This league wears you down," BC coach Jim Christian said. "They were playing really well, they had a really advantageous schedule, and now the schedule gets tough for everybody.

"They're a really good basketball team. They're going to be an NCAA tournament team and they're going to do damage in the tournament. Just tonight, they didn't play as well as they would have liked."

It was 53-all when Bowman hit a 3 from the top of the key to start an 8-0 run. On Louisville's next possession, BC forward Steffon Mitchell stripped the ball away and passed it ahead to Jared Hamilton for the layup.

The Eagles led 61-53 before Christen Cunningham drove for a layup to end the Cardinals' scoring drought. In all, Bowman scored 10 of BC's 13 points in the last 2½ minutes.

"I felt like the energy started flowing again for everybody," Bowman said, "not just me."

The Eagles had been 0-5 against Louisville in ACC play, last winning in 1995.

"I'm sitting there thinking like we have everything to play for. And you wouldn't be able to tell that in the last five minutes of the game," Mack said. "No disrespect to Boston College. Before tonight they won four conference games but I don't think they ... had less to play for than we did. In fact, I would say just the opposite."

BC led 22-14 before giving up the last nine points of the first half — four from Enoch and five from Sutton. Williams made a 3-pointer to open the second half and give the Cardinals a 26-22 lead.

Louisville: Another road loss will be damaging to the Cardinals' hopes of making the NCAA tournament. With Notre Dame, another ACC bottom-dweller, next, Louisville has a chance to pick up a victory before finishing the season at No. 2 Virginia.

The Eagles were without No. 2 scorer Wynston Tabbs, who has missed 10 straight games with a left leg injury. The freshman guard is averaging 13.9 points, 3.9 rebounds and 2.7 assists per game. BC is 4-8 without him.