Branham has big night, No. 13 Ohio State gets OT win 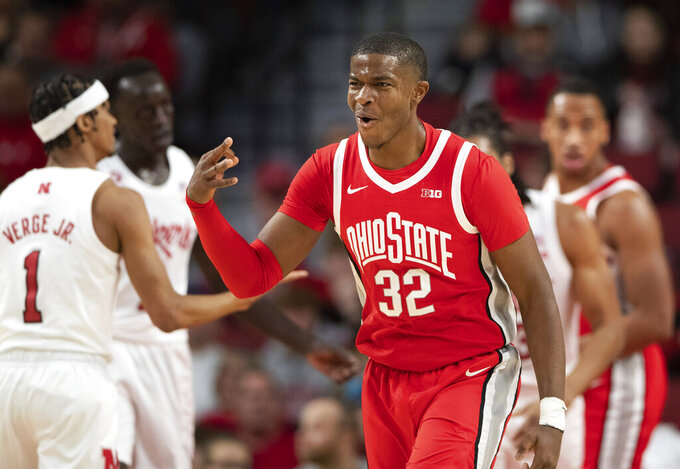 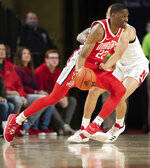 LINCOLN, Neb. (AP) — Malaki Branham was rewarded for the extra work he put in while Ohio State's basketball program was on three-week pause because of a COVID-19 outbreak.

The freshman, who had scored in double figures just once in his first 10 games, had a season-high 35 points Sunday on an otherwise tough night offensively for the Buckeyes in their 87-79 overtime win over Nebraska.

“That boy is good,” Buckeyes forward Zed Key said. “I just saw it in his eyes. He wanted to win, and he's a winner. Thirty-five, that's tough to do, especially in the Big Ten. We needed it. Some of us didn't have our legs back, just being off that amount of time.”

Branham set the Ohio State record for points by a freshman in a Big Ten game, and he tied for second-best freshman scoring performance in the nation this season.

“I kind of built my confidence after I hit those first couple," said Branham, who finished 13 for 19, including 6 for 10 on 3s. “They told me to keep shooting, so that's what I did.”

Branham was one of the few Ohio State players who did not test positive for COVID-19. The Columbus native and his longtime personal trainer got together at 5 a.m. several mornings at Value City Arena during the pause and worked on various parts of his game, including 3-point shooting.

“I’m probably going to call my trainer right now and tell him thank you,” Branham said.

Jamari Wheeler made a couple 3-pointers early in overtime to give the Buckeyes their fifth straight win. Bryce McGowens led the Huskers (6-8, 0-3) with 18 points.

Branham's breakout game was well-timed, and he scored 21 of the Buckeyes’ first 32 points.

Branham had attempted just 15 3-pointers in his first 10 games, and Nebraska played off him on the perimeter to start. He made 5 of 7 3s in the first 15 minutes and drove the baseline for a dunk to get Ohio State out to a 30-22 lead.

The Huskers went up 32-30 late in the first half following a 10-0 run. Branham ended that streak with a mid-range jumper, and Key’s inside basket gave the Buckeyes a 34-32 lead at the break.

“We really didn’t have our legs,” Branham said. “I know a couple guys were coming back (winded), and Nebraska’s defense was good. We just had to fight through it and push through to win.”

Derrick Walker scored seven straight points for Nebraska in just over three minutes to give his team the lead late in regulation, and Lat Mayen converted Kobe Webster’s pass for a backdoor dunk to put the Huskers up 72-67.

But Wheeler’s 3 from the wing cut it to two with 28 seconds left. After Mayen missed two free throws, he fouled Liddell underneath the basket on the other end with 8.9 seconds left.

Liddell made both free throws to tie it 72-72, and the game went to overtime after Eugene Brown III blocked Walker’s try from under the basket at the buzzer.

“The team kind of needed me," Branham said. "It was great plays from all the team, all the way down. Gene Brown, that block, saved us. Jamari, those clutch 3s. E.J., he struggled a little bit but he managed to hit those big free throws to tie the game.”

Nebraska: The Huskers dropped to 0-18 against ranked opponents under third-year coach Fred Hoiberg and have lost six straight to Big Ten opponents.

“We aren’t about moral victories and it still is an extremely disappointed locker room, but that shows what we are capable of,” Hoiberg said. “If we play that type of physicality every night we step on the floor in this league, we are going to have a chance. The effort was there and we are a much different team than we were a few weeks ago.”