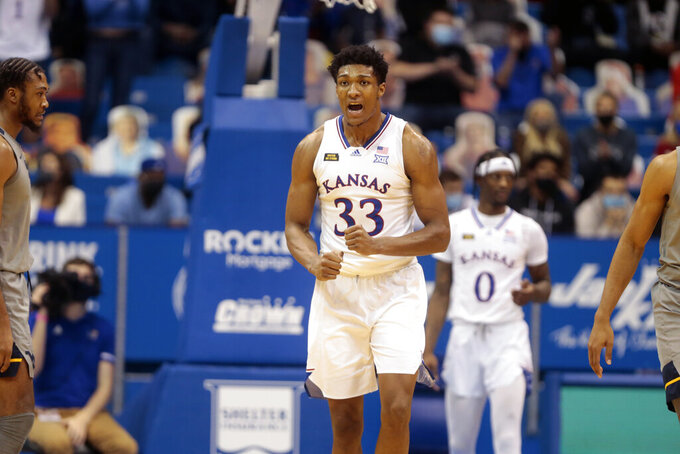 Kansas junior forward David McCormack yells out after making a block against West Virginia in the second half of an NCAA college basketball game, Tuesday, Dec. 22, 2020, in Lawrence, Kan. (Evert Nelson/The Topeka Capital-Journal via AP) 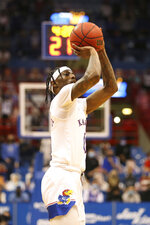 That has been the Mountaineers' style for years.

So when they backed off to deny the Jayhawks lanes to the basket, Braun's eyes lit up like the Griswold family Christmas tree. The sophomore sharpshooter proceeded to knock down six 3-pointers and score 22 points, and Jalen Wilson hit four 3s and scored 17, as No. 3 Kansas cruised to a 79-65 win over the seventh-ranked Mountaineers on Tuesday night.

“To be honest, we didn't think they'd let us catch. That's how they normally guard,” Braun explained. “They're real tough on the perimeter. We didn't think we'd get shots up. But they came out with a different game plan and we let them fly.”

Marcus Garrett added 15 points, Ochai Agbaji had 11 points and 10 rebounds, and David McCormack added 10 points and 11 boards as the Jayhawks (8-1, 2-0 Big 12) won their fifth straight against the Mountaineers.

Kansas trailed by a point at halftime before Braun and Wilson heated up, carrying the Jayhawks to their eighth consecutive victory overall. Their lone loss came in the opener against top-ranked Gonzaga, and their win streak has included victories over No. 20 Kentucky on a neutral floor, eighth-ranked Creighton and No. 14 Texas Tech on the road.

“It puts us in a position to feel good about ourselves and have some momentum,” Jayhawks coach Bill Self said. “Our team tonight wasn’t perfect by any stretch, but we did a lot of things well. Our defense was really good.”

Sean McNeil made six 3-pointers and scored 24 points to lead West Virginia (6-2, 1-1), though almost all of his production came in the first half, when the outcome was still hanging in the balance. Miles McBride added 19 points, but the bruising duo of Oscar Tschiebwe and Derek Culver was held to a combined 11 points and 12 rebounds.

“The surprise was they shot it as well as they shot it from the perimeter," said West Virginia coach Bob Huggins, whose team has lost nine of 10 to the Jayhawks and never beaten them in nine tries at Allen Fieldhouse.

“They shot it very consistently, and everybody shot it from the perimeter,” Huggins said, “and when they missed they rebounded the long rebounds and we didn't. They for whatever reason were a lot quicker to the ball than we were today.”

Kansas controlled the first period from the opening minute, when it took the lead, until the last, when McNeil hit a tightly guarded 3-pointer at the buzzer to cap a torrid half and give the Mountaineers a 36-35 advantage at the break.

That last shot made McNeil 7 of 7 from the field, 6 of 6 from behind the arc, and gave the junior forward 20 first-half points — four more than his career high. The rest of his teammates were 6 of 24 from the field and 1 of 6 from the 3-point line.

“I saw the first one go in,” McNeil said, “and it was a big confidence-builder from there.”

His confidence must have gotten lost in the locker room. McNeil missed his first couple of shots in the second half, including an air-balled 3-pointer that he claimed — to no avail — was tipped by one of the Jayhawks.

Braun buried his fourth 3 with about 15 minutes to go, setting off a 14-3 charge that turned a two-point advantage into a 60-47 lead — the biggest of the game to that point. Wilson did most of the damage with a trio of 3s, but McCormack's relentless attack on the glass against one of the nation's best rebounding teams helped to keep possessions alive.

If Wilson's barrage staggered the Mountaineers, Braun delivered the knockout blow. He added two more 3-pointers on consecutive trips down the floor, extending the Jayhawks' lead to 66-51 with just over eight minutes to play, and ignited roughly 2,500 fans that were allowed to attend their first home Big 12 game of the season.

"It was by far the best atmosphere we’ve had so far this year,” Self said. “I was excited with the crowd, and even though it doesn’t pull us through when it’s a tie game, if we were in that position, they could have made the difference.”

West Virginia may point to its inability to guard the 3-point arc, where Kansas hit 16 3-pointers, as the biggest reason for the loss. But the Mountaineers also lost the rebounding battle, something that rarely happens, and the Jayhawks managed to match them nearly point-for-point in the paint.

Kansas was 9 of 19 from beyond the arc in the second half, when it pulled away. Braun hit most of the long-range shots, but he also was a major facilitator — he contributed seven assists, too.

The Mountaineers play Jan. 2 at Oklahoma followed by another road game against Oklahoma State.

The Jayhawks have nearly two weeks off before facing Texas on Jan. 2 at Allen Fieldhouse.