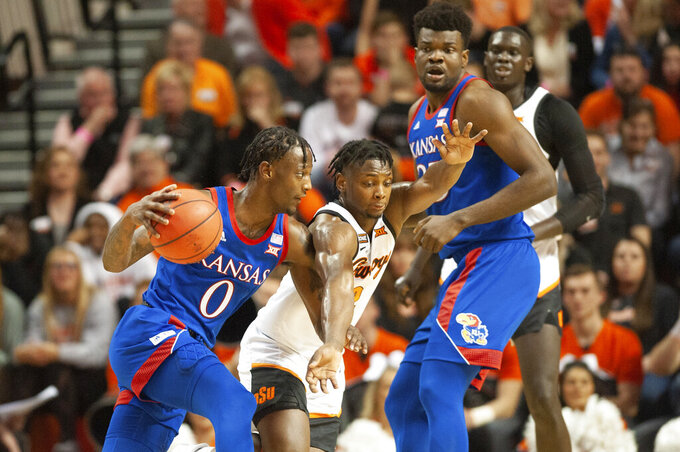 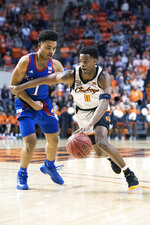 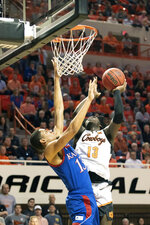 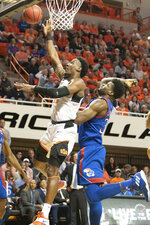 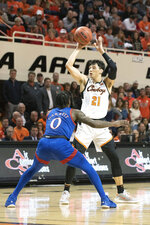 STILLWATER, Okla. (AP) — Freshman Christian Braun made the most of his first career start.

Taking the lineup spot of the suspended David McCormack, Braun had 16 points and nine rebounds to lead No. 3 Kansas to a 65-50 victory over Oklahoma State on Monday night.

Kansas (17-3, 6-1 Big 12) has won five in a row, including a 74-68 triumph over Tennessee on Saturday in the Big 12/SEC Challenge, as well as its last five on the road. The short-handed Jayhawks were playing their second game since McCormack and Silvio De Sousa were suspended for their roles in an ugly postgame brawl with rival Kansas State on Jan. 21. McCormack can return from his two-game suspension for Kansas’ next game, at home against Texas Tech, while De Sousa will be suspended for at least 10 more games.

“It’s been kind of a hard week, and our guys have played pretty maturely and acted pretty maturely since it started,” Kansas coach Bill Self said. “The best we could have done is probably what we did the last two games, so I’m pretty happy with them right now.”

Isaiah Moss, who had started the previous game for McCormack, came off the bench to score 13 points and Marcus Garrett had seven points, eight rebounds and nine assists for the Jayhawks, who led wire to wire.

“I just knew I had to step up, do what I always do,” said Braun, who scored a career-high 20 points in that game against K-State. “We’re pretty short-handed, so we all got to step up at this time.”

Cameron McGriff had 18 points and eight rebounds to lead Oklahoma State (10-10, 0-7), the only winless team in Big 12 action. Isaac Likekele had 10 points and four rebounds for the Cowboys, who had snapped a six-game losing streak with a 73-62 win at Texas A&M on Saturday.

“They outplayed us, particularly in the second half,” Cowboys coach Mike Boynton said. “The result is what it is. We just weren’t good enough.”

“We know they have some great 3-point shooters over there and that was the point coming in, to try to limit their 3s,” Garrett said. “We were big on that. Knowing how well they shoot 3s, we were trying not to give them any good looks.”

Oklahoma State: After falling behind 12-2 and 24-7 midway through the opening half, the Cowboys reeled off an impressive 17-1 run over a 6 ½-minute span to pull back to within one point when Likekele sank a layup with 1:15 remaining. The Cowboys have shown they can play with the best teams for long stretches, including their 75-68 loss to No. 1 Baylor on Jan. 18, when they led by double digits for most of the game before faltering late.

McGriff has a history of playing well against the Jayhawks, posting his fourth career game of 18-plus points against them, averaging over seven rebounds and shooting close to 49% over the last six meetings. ... Kansas center Udoka Azubuike had averaged 13.4 points, 11 rebounds and 3.6 blocks over the previous seven games but had just six points and seven rebounds along with five blocks. ... Oklahoma State won the rebounding battle 41-40, including a 21-18 edge in the second half.

“Come back to practice, work harder and try to get ready, play hard for 40 minutes,” Boynton said of Oklahoma State’s approach for fighting through its Big 12 losing streak. “There’s no time to feel sorry for yourself or hope that people (say), ‘You’ve been through a lot.’ Enough of that. I don’t want any sympathy. I don’t expect any. We should be criticized. Our fans deserve better. They deserve a program that can continue to improve during the season.”

Oklahoma State: The Cowboys travel across the state to face their “Bedlam” rival Oklahoma on Saturday.