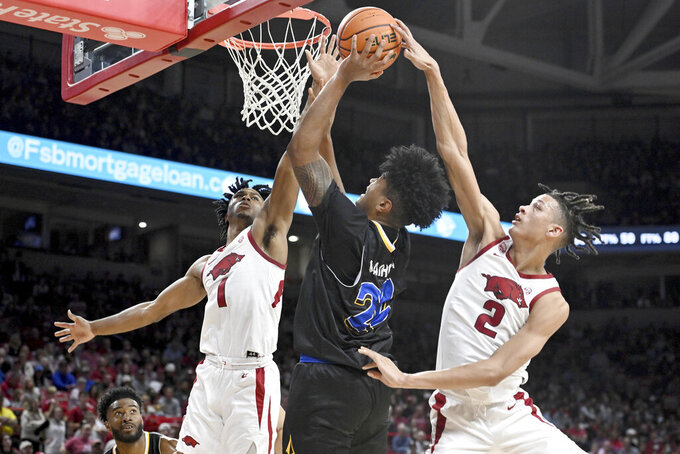 FAYETTEVILLE, Ark. (AP) — Trevon Brazile scored 23 points and No. 11 Arkansas pulled away in the second half to beat San Jose State 99-58 Saturday.

The Razorbacks (7-1) led 40-35 at the break before erupting. It was the first men’s basketball matchup between the schools.

Ricky Council IV had 17 points for Arkansas. Heralded freshman guard Nick Smith, Jr. contributed 16 points and five assists in his first career start in only his second game as a collegian.

“I think we’re getting better offensively,” Razorbacks coach Eric Musselman said. “I really do. When you have as many freshmen as we do, you should be continuing to improve.”

Arkansas junior guard Davonte “Devo” Davis, who started in each of the first six games before taking a leave of absence and missing the Troy game on Monday, returned to the team on Wednesday and played off the bench against SJSU on Saturday.

Arkansas has now won twice against Mountain West Conference opponents in its last three games, including a 78-74 overtime win over then-No. 17 San Diego State on Nov. 23 in the third-place game of the Maui Invitational in Hawaii. For the first time in eight games this season, the Razorbacks were at full strength on Saturday with all 13 scholarship players available to compete.

San Jose State, despite the loss, is only two wins away from matching its victory total from a season ago when the Spartans finished 8-23.