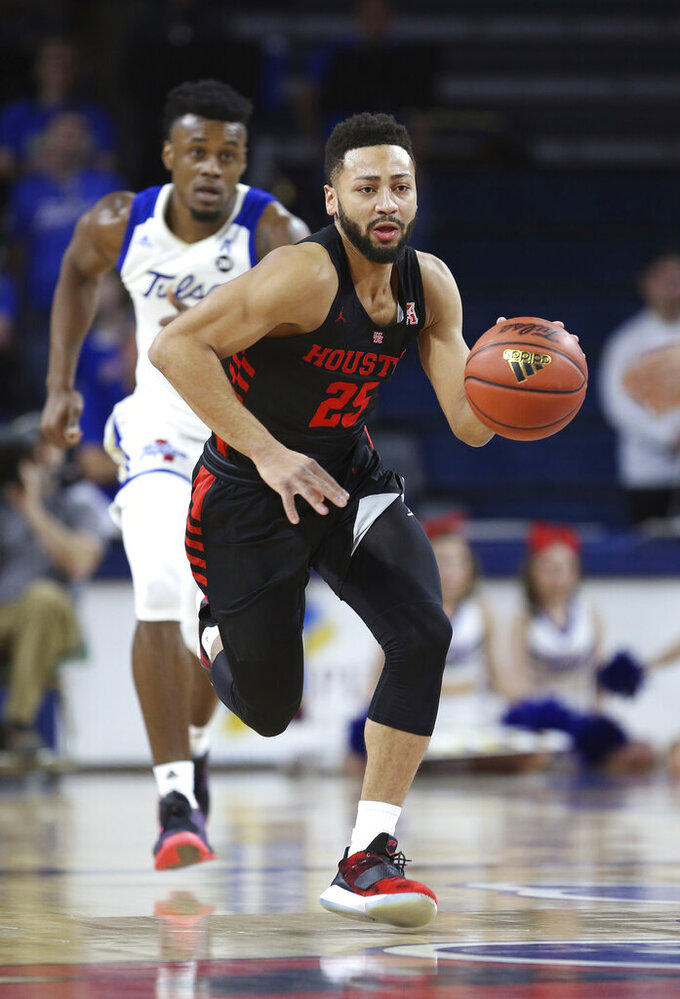 ouston's Galen Robinson (25) brings the ball downcourt on a fast break during the first half of an NCAA college basketball game against Tulsa in Tulsa, Okla., Sunday, Jan. 27, 2019. (AP Photo/Dave Crenshaw) 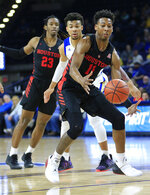 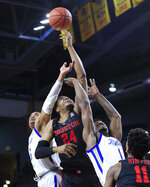 Hinton hit a tough 3-pointer as the Cougars broke away late in the first half, becoming the first Division I men's team to reach 20 wins this season by beating Tulsa 77-65 Sunday.

After a fairly even first half, Houston made four 3-pointers in a two-minute burst to grab a 33-21 lead. Hinton had a contested 3 and a pair of free throws in the final minute as the Cougars increased their lead to 45-29 at the break.

"We can do that," Houston coach Kelvin Sampson said. "We've got guys who can really shoot it."

Fabian White had 14 points and Hinton came off the bench to add 13. Chris Harris Jr. had 10 rebounds and Brady Breaon nine.

"Our young guys are really coming on," Sampson said. "When they play and practice that hard, you've got to reward them. Hinton did a really nice job tonight."

DaQuan Jeffries led Tulsa (12-9, 2-7) with 17 points. Jeriah Horne had 15, Martins Igbanu 11 and Sterling Tapline 10 as the Hurricane lost for the fifth time in six games.

Down by 21 early in the second half, Tulsa cut the deficit to eight several times. Jeffries was called for an offensive foul as he drove the lane with a chance to make it a six-point game in the final two minutes, then Brooks came back with a 3-pointer with the shot clock running out.

The Cougars made seven of their final 11 3s in the first half after a cold start and their first two of the second half to push the lead to 53-32, forcing Tulsa to largely abandon its matchup zone defense.

"We had quicker ball movement," Sampson said. "We were getting to the second or third side and getting better looks. You can't get to the other side until you cross the road. I also thought we missed a lot of good looks early, which makes you look worse than you really are."

Houston held a 49-24 rebounding edge. Tulsa ranks near or at the bottom of the conference in most rebounding stats, a reflection of both its lack of size and quickness to the ball.

Tulsa coach Frank Haith noted Houston was 11 for 35 on 3s, leading to many long rebounds.

"The rebounding is glaring," Haith said. "We've just got to keep encouraging them and stay positive. It's tough when a team takes that many 3-pointers, we need our guards to help out and track down those long rebounds."

Houston had 16 offensive rebounds and 22 second-chance points to overcome 41 percent shooting and 16 turnovers.

Tulsa, which often plays with no one taller than 6-foot-6 on the court, has to find a way to keep from being manhandled on the boards. The Hurricane is last in the AAC in offensive rebounds and had allowed 13 more offensive rebounds than any other team in the conference entering the game.

Haith pointed out that Tulsa has played five games already against three of the top teams in the conference, with two losses each to Houston and Cincinnati and one at UCF. Tulsa had great chances to win its home game against Cincinnati and at UCF, but having gone 0-5 has put the team near the bottom of the league standings.

Houston: Gets a chance to avenge its only loss of the season when it returns home to play Temple Thursday. The Owls won 73-69 in Philadelphia on Jan. 9.

Tulsa: Plays host to Memphis on Wednesday and visits Wichita State on Saturday.