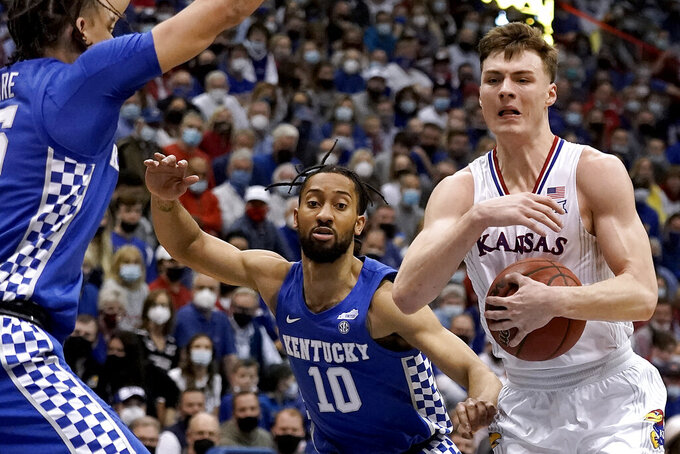 LAWRENCE, Kan. (AP) — Keion Brooks scored 27 points and Oscar Tshiebwe had a double-double as No. 12 Kentucky manhandled No. 5 Kansas 80-62 on Saturday night.

“I don’t even know who we played two weeks ago,” he said after the game. “We’ve won a lot of games against ranked teams, all kinds of different ways. I’ve done this a long time and I’ve been in many of these games on the road where it’s (ESPN College) Game Day. I told the team, ‘All the pressure is on the other team. If you play for 40 minutes, watch what happens.’”

“It’s how he’s been playing in his last couple of games and in practice,” Calipari said. “It wasn’t just making baskets. He rebounded. He defended. He came from the week side and tipped the ball. He made great plays. He did all the other things, and then he made shots.”

Tshiebwe had 17 points and 14 rebounds for Kentucky (17-4), which also got 12 points from Kellan Grady and 11 from Jacob Toppin.

Kansas coach Bill Self was not surprised by Tshiebwe’s game.

“Oscar’s stats don’t show how good he is at rebounding, and his stats show that he’s the best rebounder in the country,” Self said.

But Tshiebwe was more interested in talking about Brooks, who was not made available after the game.

“I’m so proud of him,” Tshiebwe said. “I want him to keep coming like that every night. We can be a top team if everyone steps up like that. They pay attention too much to me. Now, they forget about him.”

Kentucky dominated the boards, owning a 41-29 rebounding edge, including 12-7 on the offensive end.

“Their guys got to a level that we couldn’t get to,” Self said. “When you get into a jumping contest with those dudes, we couldn’t compete.”

Self kept searching for combinations that would allow his team to get back in the game, but that search turned up empty. Kansas used a 7-0 run to cut the deficit to 62-48 early in the second half when Kentucky missed seven straight shots, but the Jayhawks never got any closer.

Kentucky used an 8-0 run early to grab the lead and then held Kansas at bay. Kentucky led by 12 at the 10:29 mark, with their points spread among seven different players. More telling, the Wildcats held a 13-4 advantage on the boards.

The Kentucky lead grew to as many as 20 when Kellan Grady hit a 3-pointer with 2:31 left in the half and the Wildcats led 51-31 at the break, Kansas’ largest halftime deficit of the season. They trailed Kansas State by 16 a week earlier but rallied for a 78-75 win.

Kentucky: The Wildcats extended their slim lead in all-time NCAA wins to four (2,344-2,340) over Kansas. These are the two winningest programs in college basketball history. Kansas has gained 15 wins in the last two full seasons.

Kentucky returns to SEC play, where their 6-2 record is two games behind Auburn. The Wildcats will host Vanderbilt on Wednesday.

Kansas, which stands at 6-1 in the Big 12, will return to conference play at No. 23 Iowa State on Tuesday.