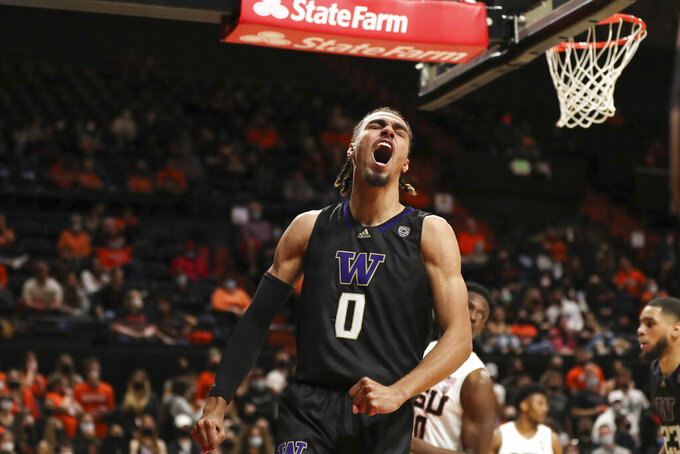 With Hopkins in COVID-19 protocol, assistant Will Conroy stepped in as head coach. And the Huskies (9-7, 4-2 Pac-12 Conference) stepped up to win their third-straight game.

There were 14 lead changes in a first half that finished with the Beavers up 38-36. OSU put together a 6-0 run — back-to-back 3-point plays by Glenn Taylor Jr., and Dexter Akanno 15 seconds apart — for a 34-29 lead. It was the largest spurt and biggest lead of the first half that saw both teams shoot at least 50%.

Washington continued the sharp play after the break, shooting 58% despite going 3 of 11 from 3-point range and made only three turnovers. Meanwhile the Beavers missed all nine of their 3-pointers — finishing 3 of 19 — and shot 39%.

Brown, the leading scorer in the league at 21 points a game, scored 18 after the break on 8-of-12 shooting.

Brown tied the game with a layup in the opening seconds of the second half and another layup, which started a 6-0 surge, put the Huskies up for good 44-43. His layup capped a 10-2 run for a 52-45 lead.

Another Brown finish at the rim started a 7-0 string capped by Bey's 3-pointer for a 60-50 lead. The Beavers could get no closer than five after that and Brown's final bucket, with eight seconds to go, produced the big lead at 82-70.

The Huskies had a string, beginning with Brown's go-head basket, when they made 10 of 12 shots.

Washington plays at Oregon on Sunday night but Oregon State's home game against Washington State has been postponed because of the Cougars' COVID-19 concerns. The next scheduled game for the Beavers is a week from Saturday at Oregon.