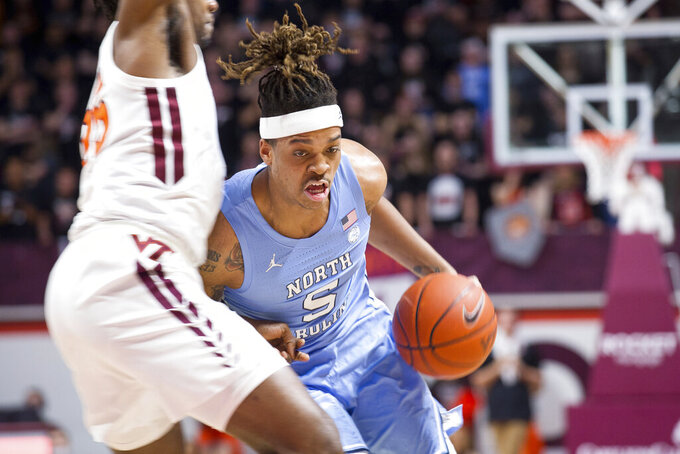 North Carolina's hopes for an NCAA Tournament berth became even more tenuous after a loss to Pittsburgh.

Before last week, the Tar Heels had no real marquee wins, but also no bad losses. They put one in the negative column with Wednesday's 76-67 home loss to the Panthers, who are 170th in the NET rankings.

Then came Saturday's 65-57 win over Virginia Tech. Finally, after seven tries, a Quad 1 win that put the Tar Heels right back on the NCAA Tournament bubble.

“There have been times as I’ve said before that they’ve been knocked down, they’ve been scarred,” North Carolina coach Hubert Davis said. “And they seem to always get back up and continue to fight.”

North Carolina (19-8, 11-5 Atlantic Coast Conference) has won most of the games it was expected to win in Davis' first season since replacing Roy Williams. Where the Tar Heels had trouble was pulling out wins in marquee games, losing to No. 5 Purdue, No. 16 Tennessee, No. 4 Kentucky and No. 9 Duke.

Their lone resume-building win, over then-No. 24 Michigan in early December, lost much of its luster as the Wolverines struggled and dropped down the NET rankings.

That changed in recent weeks as Michigan has climbed up the NET rankings after wins over Purdue and Iowa. The Wolverines were up to No. 29 in the latest NET rankings, giving North Carolina two Quad 1 wins in nine tries. Whether it stays that way is up in the air after Michigan lost to No. 15 Wisconsin on Sunday.

Either way, the Tar Heels can't afford many slip-ups with the season winding down, and they'll get another Quad 1 chance in the regular-season finale against Duke.

“We’ve done a good job this year of bouncing back,” North Carolina leading scorer and rebounder Armando Bacot said. “But now it’s starting to get into crunch time. We’ve got to just figure out how to not have any lapses for the rest of the season and just really lock in.”

Michigan (14-11, 8-7 Big Ten). In big trouble after some early-season struggles, the Wolverines picked up a massive win over Purdue and beat fellow bubble team Iowa. A contentious 77-63 loss to No. 15 Wisconsin on Sunday was a setback for coach Juwan Howard's team.

Rutgers (16-9, 10-5 Big Ten). Given little chance of returning to the NCAA Tournament just a couple weeks ago, the Scarlet Knights reeled off four straight wins over ranked opponents to put themselves back in the conversation. A win over No. 5 Purdue on Sunday would have been an even bigger boost, but the 84-72 loss shouldn't hurt that much.

Belmont (24-5, 14-2 Ohio Valley). The Bruins are two games behind No. 21 Murray State in the standings, but a 10-game winning streak puts them in position to possibly turn the Ohio Valley into a two-bid league. They get a second shot at the Racers on Thursday, too.

Oregon (17-10, 10-6 Pac-12). The Ducks bounced back nicely from an ugly loss to California by beating Washington State. A sweep by the Pac-12's desert schools gives Oregon three losses in four games and wobbles its NCAA Tournament bubble.

BYU (19-9, 7-6 West Coast). A strong start to the season has turned into a fade with five losses in seven games, the latest to fellow bubble team Saint Mary's.

Loyola Chicago (20-6, 11-4 Missouri Valley). A seven-point home loss to Drake pushed the Ramblers closer to the edge of the bubble. They'll need a strong finish if we're going to see Sister Jean back in the NCAA Tournament.

TCU (16-8, 5-7 Big 12). Four losses in five games leaves the Horned Frogs in the position of needing a strong finish in a closing stretch that includes two games each against No. 6 Kansas and West Virginia.