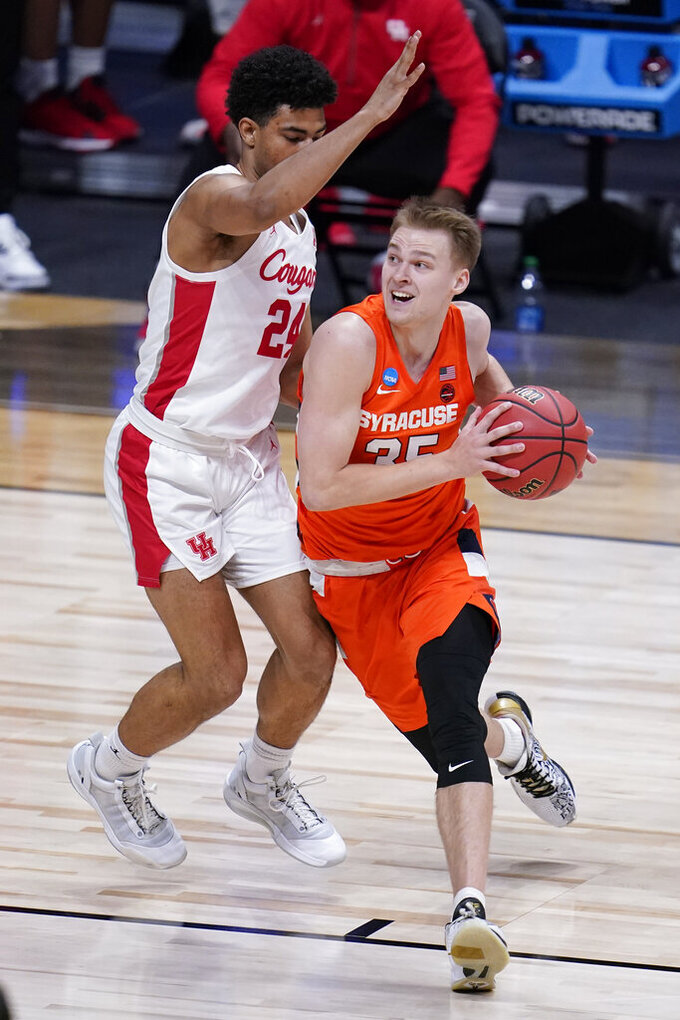 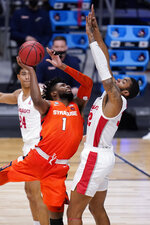 Buddy Boeheim carried Syracuse into the Sweet 16 with a masterful shooting stroke.

DeJon Jarreau and Houston made sure the postseason run by the Orange went no further.

The NCAA Tournament run for the 11th-seeded Orange ended on Saturday night in a 62-46 loss to No. 2 seed Houston in the Midwest Region semifinals.

Boeheim never got going and neither did the Syracuse offense. The 46 points were the fewest for the Orange (18-10) since scoring 34 in a loss to Virginia in November 2019 and just the 10th time being held under 50 in the past 10 years.

It was also the fewest points scored by Syracuse in an NCAA Tournament game.

“They’re just really physical, really aggressive and we got some looks that we didn’t capitalize on,” Boeheim said. “You can’t lose those opportunities against a team like that.”

Boeheim finished with 12 points, but shot 3 of 13 and just 1 of 9 on 3-pointers. It was his worst scoring game since finishing with eight points in an early February loss against Clemson, another night where Boeheim was just 3-of-13 shooting.

Syracuse knew Boeheim would get plenty of attention -- mostly from Jarreau -- and it could lead to opportunities for others. But the rest of the Orange struggled as well. Joseph Girard III also had 12 points, but the Orange got very little from their frontcourt. Syracuse shot 28% overall and was outscored 30-16 on points in the paint.

“Jarreau is a really, really good defensive player and they helped, they were there to help him but he’s a really good defender,” coach Jim Boeheim said. “I just thought that would open up some things for us to score inside and we were not able to do that. I felt that our forwards would be able to score in this game and they weren’t able to.”

He never got started against the Cougars, who were determined not to let him have a big scoring night against their pressure defense.

Houston rotated several defenders against Boeheim. The most successful seemed to be Jarreau, who used his 6-foot-5 frame to keep Boeheim from having clean looks.

Nearly 25 minutes of game time elapsed before Boeheim finally hit his only 3-pointer. His struggles were a microcosm for Syracuse’s shooting problems from deep. After hitting a tournament-high 29 3-pointers through the first two rounds, the Orange were 5 of 23 on 3s.

“Buddy’s gotten better. He did make some moves inside, he got in there,” Jim Boeheim said. “He settled a little bit too much for the 3 in the second half. He probably should have continued to drive a little bit more, but it’s a learning experience.”