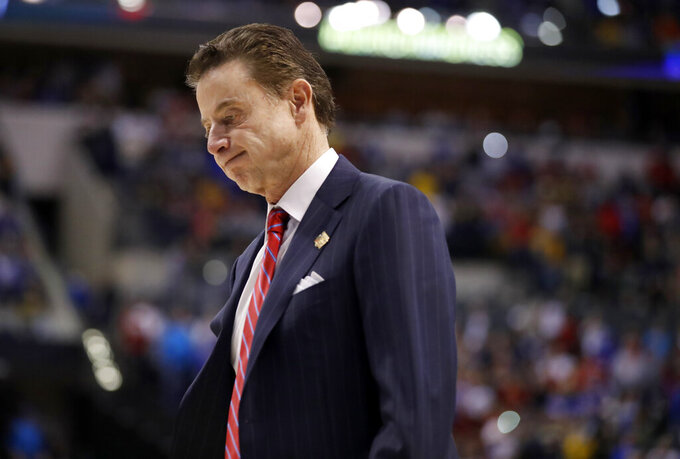 FILE - In this March 19, 2017, file photo, Louisville coach Rick Pitino walks off the court after the team's 73-69 loss to Michigan in a second-round game in the men's NCAA college basketball tournament in Indianapolis. A woman who had sex with coach Pitino at a restaurant was later jailed for trying to blackmail the coach to keep the tryst secret. A former escort wrote a book describing parties for recruits that included prostitutes; the team had its 2013 national title vacated because of that. And yet, Pitino didn’t lose his job until the FBI investigation found that Louisville had paid a recruit’s family $100,000--an allegation that Pitino said he was “shocked” to hear. He denies any wrongdoing. (AP Photo/Jeff Roberson, File) 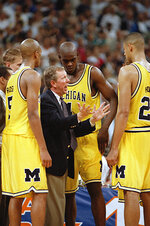 SALT LAKE CITY (AP) — The NCAA Selection Committee has spoken, seeding 64 teams for the tournament that starts Thursday. What if the Committee on Infractions had a say, too?

Records would still matter — but not the sort compiled during the regular season. Rap sheets, academic fraud, bad sportsmanship, terrible PR, good, old-fashioned bribes, the dreaded "lack of institutional control" — you could pretty much fill out an entire bracket simply listing what many of these teams have gotten wrong over the past months, years and decades.

Of course, March Madness, which tips off Thursday with 16 games, has a way of pushing all that bad news to the back burner.

"What sells sports are hype and hope, and you really can't find a better example of both than the NCAA Tournament," says marketing guru Joe Favorito.

But first, let's take our medicine. Here's a bracket-style review of the pain and malfeasance that some of the schools in this year's March Madness bracket have inflicted on their sport, their fans and themselves.

YALE — Former women's soccer coach Rudy Meredith has agreed to plead guilty in the admissions-bribery scandal making headlines this month. And while basketball isn't part of that story, the billions brought in by March Madness help underwrite all the sailing, tennis and crew teams at schools ensnared in this scandal. Says Favorito: "Unfortunately, we're a little bit immune to the transgressions of men's basketball and football, but when it gets down to these sort of things, it wakes us up and we say, 'How can those sports be corrupt, too?'"

KENTUCKY — John Calipari, the king of One and Done, has been clean as a whistle, by NCAA standards, since he arrived at UK 10 years ago. But he comes with tons of baggage at his previous stops in Memphis and UMass .

AUBURN — Former assistant Chuck Person recently pleaded guilty to conspiracy in the ongoing case involving bribes paid to families of top recruits. Person was on the staff of head coach Bruce Pearl, who has a history of entanglements with the NCAA. He got fired by Tennessee and was handed a three-year "show-cause" penalty after regulators said the coach's lies and cover-up efforts regarding a recruiting case turned what would've been a minor infraction into a major one.

IOWA — Coach Fran McCaffery got suspended for two games for a profanity-laced tirade directed toward the refs last month. He has a history: Both he and his wife were ejected from a game in 2006 for swearing at the officials.

BRADLEY — The program from Peoria, Illinois, restricted access to a longtime, local beat reporter for "not promoting the Bradley brand." The school has apologized and the reporter has accepted it, but ... really?

SYRACUSE — In 2011, assistant coach Bernie Fine lost his job in the wake of allegations that he repeatedly molested two step-brothers, who were ball boys for the team. No criminal charges were filed. A few years later, coach Jim Boeheim settled a lawsuit brought by the boys and said he "regrets" saying the boys were lying about being molested.

MINNESOTA — Some might say the Gophers wrote the book when it comes to academic fraud . More likely, someone else wrote it for them. Coach Clem Haskins lost his job and the school, located a bus ride from the site of this year's Final Four, got four years of probation for a massive scandal in which an academic counselor did coursework for some 20 basketball players in the 1990s. The NCAA vacated Minnesota's 1997 Final Four appearance. This is also the program that triggered one of the worst brawls in sports history . And, in a not-so-touching bit of manufactured irony, the 2019 team, coached by Richard Pitino, opens the tournament against Louisville , which recently fired his father, Rick.

MICHIGAN STATE — Michigan State allowed former player Travis Walton to remain as a graduate assistant after Walton was charged with punching a woman at a bar. Coach Tom Izzo said he never covered anything up and followed policies to the "Nth degree." Walton's case was dismissed. Izzo, meanwhile, has denied ever dealing with sports doctor Larry Nassar, who molested hundreds of Michigan State athletes over the span of decades. The school has agreed to pay more than $500 million to settle lawsuits brought by victims.

ON THE BUBBLE — Duke (for being Duke, for Grayson Allen, for coach Mike Krzyzewski berating a player who had just beaten him, for being the sort of program that gets Nike workers in China to design a special shoe for Zion Williamson, for Christian Laettner's foot stomp , etc., etc.). ... Houston (For hiring Kelvin Sampson, who earned a five-year show-cause penalty for recruiting violations at Indiana). ... Mississippi State (Player here targeted in an email sent by a middleman recently convicted in the recent FBI investigation sweeping up a number of programs and their recruiting practices). ... Mississippi (For being the sort of place where players feel the need to kneel during the national anthem because a pro-Confederate rally day is being held on campus). ... New Mexico State (Big NCAA problems in the 1990s) ... Washington (The recruitment of eventual NBA top draft pick Markelle Fultz is part of the FBI probe).

LOUISVILLE — The short version: A woman who had sex with coach Rick Pitino at a restaurant was later jailed for trying to blackmail the coach to keep the tryst secret. A former escort wrote a book describing parties for recruits that included prostitutes; the team had its 2013 national title vacated because of that. And yet, Pitino didn't lose his job until the FBI investigation found that Louisville had paid a recruit's family $100,000 — an allegation that Pitino said he was "shocked" to hear. He denies any wrongdoing.

KANSAS — Silvio De Sousa and Billy Preston are among the KU recruits whose names have cropped up in the FBI investigation about Adidas payments to prospects. There are more trials to come this spring, none of which are expected to portray the Jayhawks in a very flattering light.

MICHIGAN — The Fab Five ushered in a new era for college basketball and also set the bar high when it came to NCAA corruption . Both the team's Final Four appearances in the 1990s were later vacated as a result of the case involving Chris Webber and an infamous booster named Ed Martin.

OREGON — Coach Dana Altman was criticized for letting two players being investigated for sexual assault continue to play in the NCAA Tournament in 2014. Those two, and another redshirt, were later banned from campus, though the district attorney did not prosecute the case.

NORTH CAROLINA — A massive academic-fraud case that took years to investigate ended with the NCAA issuing no significant penalties. The case, however, will not soon be forgotten. The university faced several major violations because of classes athletes took from 2002 through 2011 in the African and Afro-American studies department that were designed to keep them eligible. UNC got off in part because the investigators found the classes were not solely created to help athletes; other students benefited, as well.

LSU — Too soon? Not if the wiretap is to be believed. On it, coach Will Wade is heard discussing a "strong-ass offer" he made to a recruit. All this was revealed earlier this month in a report by Yahoo . LSU has suspended Wade because he is not cooperating with the school and NCAA investigation. LSU opens play Thursday against Yale, and you can expect the Tigers to tap into the oft-played, and often-effective "Us Against the World" trope for as long as they remain in this tournament.

THE ONE AND ONLY

BAYLOR — Perhaps the worst thing you can say about Baylor is that when you type the words "Baylor Scandal" into Google, the first thing that comes up is not the fact that basketball player Carlton Dotson is in jail for the 2003 murder of his teammate, Patrick Dennehy. And that their former coach, Dave Bliss, got fired and sent the program into oblivion. His crime: Trying to get other teammates to portray Dennehy as a drug dealer, as a way of explaining how Dennehy, who wasn't on scholarship, had paid his tuition when, in fact, it was Bliss footing the bill. Instead, the Google search gives first reference to the case involving the football program, in which coach Art Briles got fired in the wake of a massive sex-abuse scandal involving players on that team. And in which Ken Starr of Whitewater fame was fired as Baylor's president for the way the university responded to the sex-assault investigation. Just last week, Starr said he had hosted a fundraiser for a former player who was acquitted of rape.