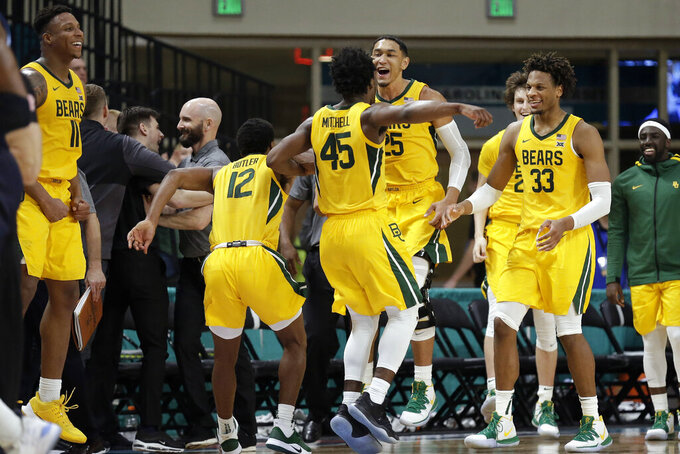 CONWAY, S.C. (AP) — Villanova and Baylor spent about 35 minutes trading buckets — and the lead — during a high-level game that could have passed for a Sweet 16 matchup.

Once Jared Butler and the 24th-ranked Bears got hot, the No. 17 Wildcats simply couldn’t stop them.

Butler scored 10 of his 22 points during the final 6 minutes, helping Baylor pull away for an 87-78 victory over Villanova on Sunday night.

This time, it was his team: MaCio Teague scored 18 points while Davion Mitchell added 13 to help the Bears (5-1) pass their first Top 25 test.

Baylor broke open a tight, tense game with nine ties and 18 lead changes by scoring on its final 12 possessions and holding the Wildcats without a field goal during the final 2½ minutes to win their fourth straight.

Butler, the tournament MVP who has led the Bears in scoring in five of six games, hit 3s on back-to-back possessions early in that stretch, the first of which put them up 67-66 with just under 6 minutes left and the second breaking a 67-all tie.

“It seems like the bigger the moment, the better he plays,” coach Scott Drew said of Butler.

Villanova: The run of in-season tournament success is over for the Wildcats, who were chasing their seventh straight championship in a holiday event. They hadn’t lost one of these since 2012 — and still have more national championships (two) than in-season tournament losses (one) in that span. But they also fell to 0-2 against Top 25 opponents after also losing to No. 10 Ohio State, failing to get a single defensive stop in the final 6 minutes.

“I think that’s a really good team, and we see how much better we have to get,” coach Jay Wright said. “So that’s what’s good about these tournaments. We see improvement, but we also see a lot of room for a lot of improvement. A lot of work to do.”

Baylor: Drew likes to say teams that win in-season tournaments also tend to play well in the big tournaments in March. His team has won three of them in four years, this one featuring a backcourt of Teague and Butler that had the look of a crew that could lead a deep NCAA Tournament run.

Baylor figures to move up a couple of spots in the poll that is released Monday. But it’s tough to penalize Villanova for losing a tight one to a nationally ranked opponent on a neutral court.

Both teams hit more than half their shots — Baylor shot 53% while Villanova was at 52%. The difference came at the 3-point line late: The Bears were 6 of 9 from long range in the second half while the Wildcats were just 2 of 11. ... Baylor also had just five turnovers.

Preseason all-Big 12 pick Tristan Clark says he’s between 85-90% healthy after he missed the last 20 games of last season with a knee injury, then missed a victory over Texas State while having what the school said was a minor, non-operative knee procedure. Clark played 21 minutes in this one with 10 points and four rebounds. “I’m getting flashes of how I used to be before my injury,” Clark said.

Villanova: Faces LaSalle in a Big Five game on Dec. 1.