Bynum's 3-pointer lifts No. 17 Providence over No. 21 Xavier 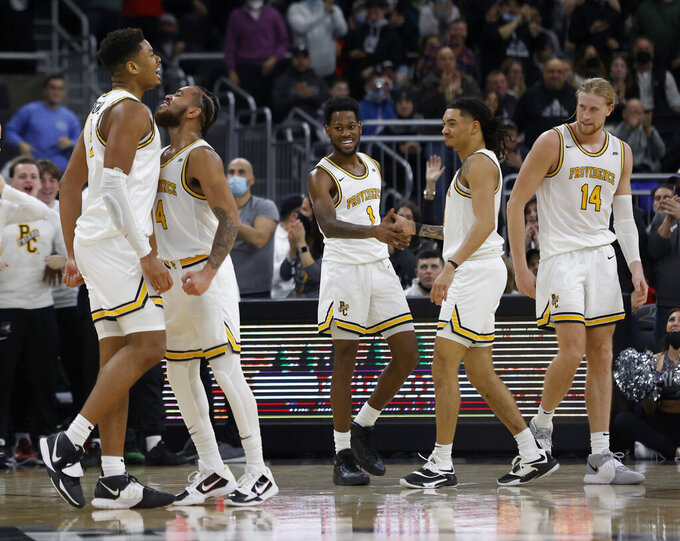 CINCINNATI (AP) — Jared Bynum's 3-pointer with 1.5 seconds remaining lifted No. 17 Providence to a 65-62 victory over No. 21 Xavier on Wednesday night.

Al Durham led the Friars with 22 points, helping them improve to 17-2 for the first time since the 1976-77 season. Ed Croswell added 10 points off the bench for the Friars.

Paul Scruggs, who led Xavier with 16 points, hit a 3-pointer to give the Musketeers a 62-60 lead with 56 seconds left. But he missed a go-ahead floater to help set up Bynum's game-winner.

“It was a high-level game,” Bynum said. “It was going to come down to one shot. I was able to make the last shot and I'm grateful for that.”

“This was one heck of a Big East basketball game," Friars coach Ed Cooley said. “This thing was packed. I had fun coaching in it. Great win for our men.”

Jack Nunge, who leads the Musketeers in scoring despite coming off the bench, made only his second start of the season and scored 15 points.

Durham helped the Friars get off to a fast start with 12 first-half points.

It was another slow start for the Musketeers, who trailed by as many as 14 points in the first half as the Friars connected on their first four 3-point attempts.

“We knew were coming into a hostile environment and we wanted to throw the first punch,” Bynum said.

Xavier finished the first half strong behind Nunge, who had 13 points in the half including a 3-pointer just before halftime to cut the Friars' lead to 35-29.

“This isn't a league for the weak,” Musketeers coach Travis Steele said. “Providence is a really good team. We can't lay down on the mat. Creighton is our next game. They aren't going to feel sorry for us.”

Consecutive baskets by Zach Freemantle got the Musketeers (14-5, 4-4 Big East) within two early in the second half. He scored 12 points.

“We stayed connected," Nunge said. “We fought for the rest of the game. We thought if we stepped up our defensive intensity we could get back in the game.”

Scruggs' 3-pointer with 51 seconds remaining gave the Musketeers their first lead since the first minute of the game.

Durham hit two free throws to tie it with 36 seconds left to set up Bynum's heroics. After Scruggs missed the floater, the Friars created Bynum's shot off quick transition.

“That was one of the better defensive stops we've had in a long time,” Cooley said. “Then it was defense to offense and Bynum with the big shot.”

The Friars won despite leading scorer Nate Watson going scoreless. He picked up his fourth foul with 9:19 remaining. He missed his only two shot attempts and went 0 for 3 from the free throw line.

“If you told me Nate Watson would struggle like that and ... it just speaks to the maturity and resiliency of the group,” Cooley said.

Providence guard A.J. Reeves, the Friars’ third-leading scorer with 10.7 points per game, missed his fifth straight game due to an injured pinkie. “He is getting better,” Cooley said. “It’s a four-to-six week injury. We need him. Games are only going to get tougher.”

Providence: The Friars have five graduate students on their roster for the first time in program history. Those players have combined for 549 games played, and that experience was evident in a raucous Cintas Center.

Xavier: It was an off night for a couple of the Musketeers' best shooters. Adam Kunkel and Nate Johnson, the team's leading scorer, were a combined 0 for 10 from the floor and 0 for 8 from 3-point range.

Providence: hosts No. 22 Marquette on Saturday.

Xavier: plays at Creighton on Saturday.