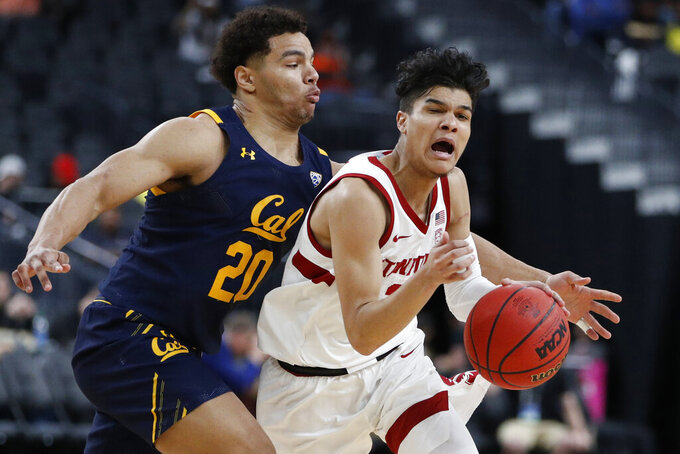 Stanford's Tyrell Terry (3) drives around California's Matt Bradley (20) during the second half of an NCAA college basketball game in the first round of the Pac-12 men's tournament Wednesday, March 11, 2020, in Las Vegas. (AP Photo/John Locher)

LAS VEGAS (AP) — For California and Stanford players and coaches, the game went on - even with a cloud of uncertainty going on in the sports world - and world.

Matt Bradley and Paris Austin both had 18 points along with six rebounds each to lead California past Stanford 63-51 at the first round of the Pac-12 Tournament on Wednesday night at T-Mobile Arena.

Cal (14-18), which entered the tournament as the 10th seed, advanced to play No. 2 UCLA on Thursday. Kareem South added 15 points for the Bears.

The game will be among the last without fan restrictions. The league announced prior to the game the conference's tournament will be played under a restricted attendance policy.

Earlier in the day, the NCAA announced that its annual tournament would be played under similar circumstances.

“If health and the safety is the No. 1 priority that we say it is, then fully support keeping just those that are necessary to compete in the game tomorrow,” said California coach Mark Fox, who won his 300th game in his career. “And hopefully we can regroup and play well.”

“I think today we just -- the intent was there and the care factor, as coach said, was there,” Wills said. “But I think we laid a little bit of an egg today. And just our basketball lives are on the line right now. And we failed to do that today.”

The Bears jumped to a 7-0 lead and never trailed. Stanford once tied it at 17. Cal led 30-20 at halftime, capped by a Joel Brown running layup at the buzzer. The Bears built their largest lead at 16 late in the game and now will look back at their 50-40 loss to the Bruins on Jan. 19.

“It's been a long time since we played UCLA,” Fox said. “They're a completely different team. We couldn't score, their defense was elite.”

“If you look at a piece of paper, I think we would be in,” he said. “But on the flip side of that, it's the eye test. If you take tonight out of the equation, I think our eye test looks pretty good. We have a team that competes defensively, for the most part have been elite consistently this year.”

Fox pleaded for his rival to be selected.

“First of all, we beat a terrific team,” he said. “This league deserves to have seven teams in the NCAA Tournament. Stanford had some great wins.”

The teams split the regular season with Cal winning the second game at home, 52-50 on Jan. 26. This was the fourth time the teams have met in the 22-year history of the conference tournament. The series record is 2-2. The last time was in 2012 when the Cardinal won 76-58. The Golden Bears still lead the all-time series 150-125.

Stanford: The Cardinal are looking to reach the NCAA Tournament for the first time since 2014. Coming into Wednesday, Stanford led the Pac-12 in shooting at 47.4% and was 20th nationally. Ironically, the Cardinal shot 27.3% in the first half. Stanford had three players earn All Pac-12 recognition with first-teamer Oscar da Silva (four points), who was averaging 16.1 points per game coming into Wednesday.

Cal: Will play No. 2 UCLA Thursday in the quarterfinal round.

Stanford: Will await word for a postseason tournament berth.