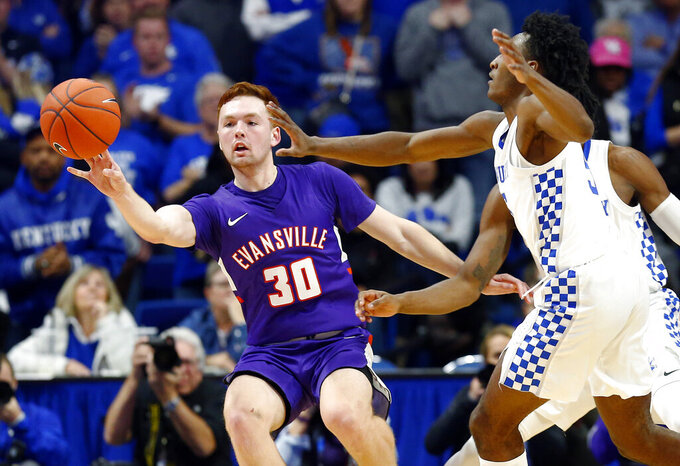 Evansville's Noah Frederking (30) passes the ball away from the defense of Kentucky's Immanuel Quickley during the second half of an NCAA college basketball game in Lexington, Ky., Tuesday, Nov. 12, 2019. Evansville won 67-64. (AP Photo/James Crisp)

LEXINGTON, Ky. (AP) — Kentucky coach John Calipari has repeatedly insisted that high early rankings aren’t indicative of how much more work his young, talented teams have to put in at this time of the season.

He says it so much it starts to sound like rhetoric, just coach speak. It’s likely he has his team’s attention now.

The currently No. 1 ranked Wildcats — and that will also likely change when the next Top 25 poll is released — were upset 67-64 by unranked Evansville on Tuesday night. Just a day after being anointed as the nation’s top team following impressive opening-week victories over then-No. 1 Michigan State and Eastern Kentucky, the Wildcats (2-1) were outshot, outrebounded and outmuscled on their Rupp Arena floor by the determined Purple Aces.

“This was a great lesson for all of us, including me,” Calipari said. “I mean, we could say they got outplayed and I could tell you I got out-coached.”

As for his players’ psyches, the coach added, “They’re hurting and they should be, but my guess is they will learn from this and understand we can’t be this way.”

The loss ended a 52-game home winning streak against unranked opponents and sent shocked Wildcats fans heading to the exits wondering what had happened.

Not that Kentucky’s championship aspirations have disappeared.

A favorable schedule allows the Wildcats time to regroup before facing their next Power Five opponent on Dec. 14 against Georgia Tech. But they demonstrated they can't take any opponent for granted, particularly after 25-point underdog Evansville humbled them on both ends of the court and led for nearly 30 minutes.

Calipari will surely consistently remind them of what can happen if they aren’t ready to play — against any opponent.

Despite returning four veterans and welcoming another group of highly-touted freshmen, Kentucky began the season with concerns.

Post depth is one of the biggest challenges the Wildcats will face all season with 6-foot-11 junior Nick Richards and 6-10 sophomore EJ Montgomery the only big men on the roster. Ankle injuries to both haven’t helped early on, though Richards has played every game since missing the second exhibition. Montgomery has missed the past two contests and is being evaluated daily.

Even when they’re back at full strength, Kentucky’s bigs will have to stay out of foul trouble. Its next tallest players are 6-9 forwards Nate Sestina and Ben Jordan — a right-handed pitcher brought over from the baseball team before the season began — and 6-6 Kahlil Whitney.

The Wildcats may have no choice but to play small in stretches.

“Coach was right, we got out-toughed,” Sestina said. “It’s a mental thing for me. Just got to be mentally tough late in the game, especially when I’m tired and I wasn’t” tough.

Calipari believes several mistakes that led to the loss are correctable, including mental errors. The Wildcats have played at a quick offensive pace, but they also need more control. And they also have to more efficient from the field after finishing below 40% in two of their three contests.

Calipari has always stressed the importance of playing better from February on rather than in November. And that’s a good thing because the Wildcats are under greater scrutiny in the aftermath of a defeat that has made them a social media punchline.

“We can’t look at it and dwell on it,” said freshman guard Tyrese Maxey, whose 3-point attempt with 3 seconds remaining against Evansville fell short. “We have to build on it. Look at it and move forward. It happened and we didn’t want that to happen. But hey, we have a long season ahead of us and we’re just trying to get back to the grind and move forward.”