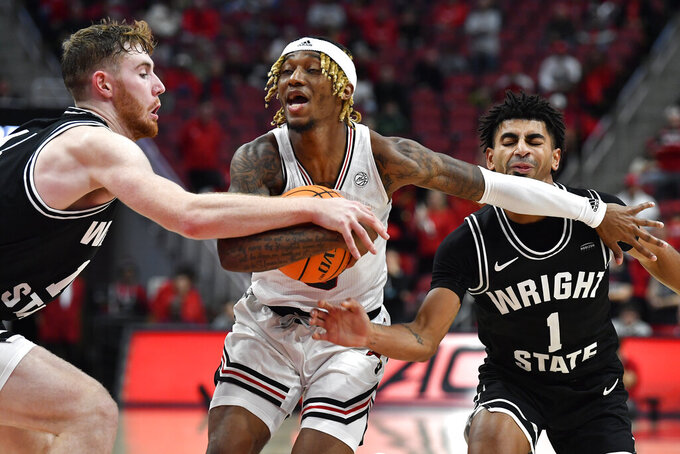 LOUISVILLE, Ky. (AP) — Trey Calvin made a game-winning jumper at the buzzer to lift Wright State over Louisville 73-72 on Saturday.

Brandon Noel tipped in a miss to pull Wright State within 72-69 with 1:03 remaining. Louisville missed a long 3-pointer late in the shot clock and Noel had a baseline dunk, off a nice assist from Tim Finke with 13.2 seconds left.

Wright State forced a jump ball on Louisville's inbounds play with 8.4 seconds left and took possession. Calvin used a high screen to switch defenders and he pump-faked before sinking a long jumper and getting surrounded by teammates at the other end.

The play was reviewed by officials and showed the ball leaving Calvin's hand with 0.2 left.

It was the second straight one-point loss for Louisville after falling 67-66 to Bellarmine in the opener on Wednesday, leaving first-year coach Kenny Payne looking for his first victory.

Calvin, who scored a career-high 37 points in a 102-97 double overtime loss to Davidson, finished with 17 points and five assists for Wright State (1-1). Noel added 13 points and six rebounds.

El Ellis scored a career-high 29 points on 12-of-20 shooting for Louisville (0-2), which plays Appalachian State on Tuesday followed by No. 10 Arkansas on Nov. 21. Jae’Lyn Withers had 15 points and 11 rebounds.

Louisville outshot Wright State 51%-48%, but the Raiders hit big shots down the stretch to overcome a 48-38 hole early in the second half. Wright State's bench outscored Louisville 34-7 and was nearly even in paint points (44-42).