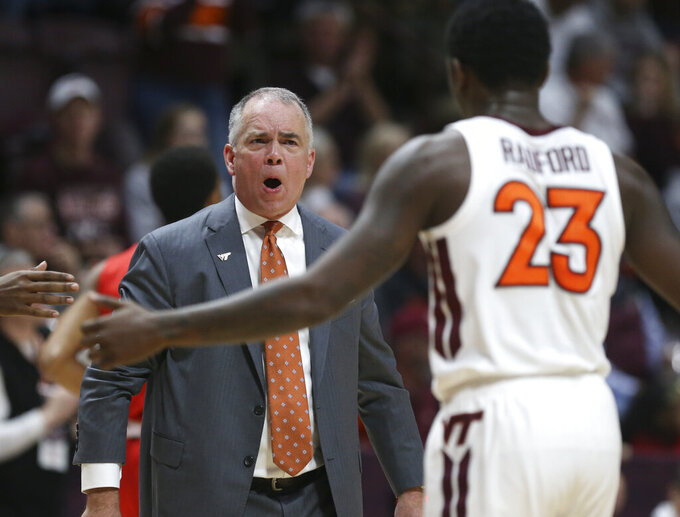 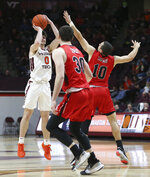 On a day in which Virginia Tech played poorly for the most part, Cattoor came off the bench to score a career-high 14 points, leading the Hokies to a 64-55 victory over VMI on Saturday.

Cattoor hit 4 of 8 from the floor, including two 3-pointers for the Hokies (9-3), who won their third straight game despite shooting a season-low 34% (21 of 61). Isaiah Wilkins, who also came off the bench, added 13 points for Virginia Tech, which extended its home-court nonconference winning streak to 32 consecutive games.

“Coming off the bench, we created energy,” Cattoor said. “You can kind of see how the game unfolds. You can see from the bench how they’re playing defense and their tendencies and stuff like that. It’s good to see that before you get in the game and start playing.”

Virginia Tech, which didn’t hit a field goal in the first 7:39 of the game, led by just six late in the second half, but scored five points on one possession when point guard Wabissa Bede hit a lay-up just as the shot clock sounded to give the Hokies a 47-39 lead. Following the shot, VMI head coach Dan Earl was given a technical foul, and the Hokies’ Jalen Cone hit both free throws with 7:29 remaining to give Virginia Tech a 49-39 advantage.

“I’ve played them (VMI) any number of times and never had those difficulties, but I shoulder all of the blame,” said Virginia Tech head coach Mike Young, who had previously coached at Wofford, a Southern Conference foe of VMI. “My team wanted to do the right things. We found some things in the second half, but it was a bit of a struggle.

“But I’ve never been part of a bad win. I’ll take that and move on down the line. Look for Santa Claus here in a couple of days.”

Curfman paced the Keydets with 15 points. Travis Evee led with 20, but had seven turnovers. VMI scored its fewest points of the season and turned the ball over a season-high 23 times.

“We’ve got to figure out how to take care of the ball better,” Earl said. “The 20 turnovers killed us for what we are, and hopefully (we can) make some more shots. Our two young guards (Curfman and Evee) made some shots late, but we’ve got to execute better certainly and be better against the physicality.”

VMI: The Keydets two freshman guards gave the Hokies plenty of fits and figure to get even better as the season goes along. Curfman and Evee combined to score 35 points, with Evee scoring all 20 of his in the second half.

Virginia Tech: The Hokies won despite leading scorer Landers Nolley II suffering the worst game of his young career. Nolley scored just four points and hit just 1 of 11 from the floor. He settled for too many jumpers, was short on a lot of them, and sat for extended stretches in the second half. Perhaps the holiday break comes at a good time for the redshirt freshman, who was averaging 18.5 points per game before Saturday.

Earl said that he wasn’t complaining to the official when he received the technical foul with 7:29 remaining. He was upset with one of his players for not rotating over and challenging Bede’s lay-up, and Earl said the official misinterpreted the situation.

The Hokies’ bench scored 34 points in a victory over Gardner-Webb on Sunday, and against VMI, Wilkins and Cattoor paced a bench effort that out-scored the Keydets 38-4. The bench saved Virginia Tech on a day when no Hokie starter hit more than three field goals.

“Isaiah Wilkins was terrific,” Young said. “Hunter Cattoor had his best game. Both of those kids have played well for us … Good teams have other people help them win. Certainly we saw that tonight.”

VMI: The Keydets play at USC Upstate on Dec. 29.

Virginia Tech: The Hokies play at home against Maryland Eastern Shore on Dec. 29.