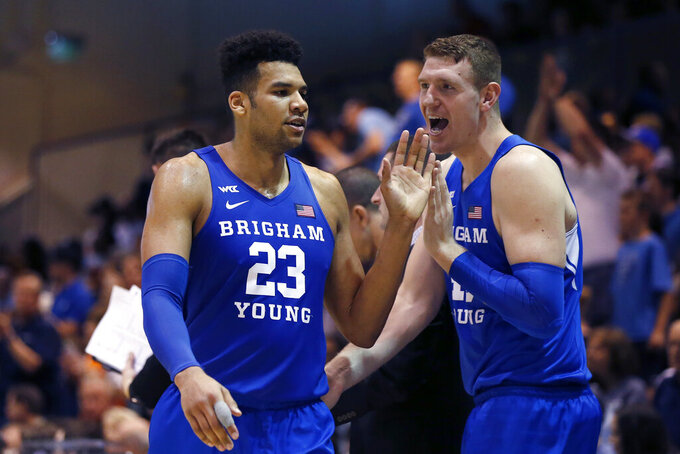 BYU forward Yoeli Childs (23) is greeted by Kolby Lee as he walks off the court during the second half of the team's NCAA college basketball game against Pepperdine on Saturday, Feb. 29, 2020, in Malibu, Calif. (AP Photo/Ringo H.W. Chiu)

MALIBU, Calif. (AP) — Yoeli Childs had a milestone afternoon in his final regular-season game for BYU,

The senior forward scored a career-high 38 points and became the first player in school history to reach 2,000 points and 1,000 rebounds as the 17th-ranked Cougars rallied in the second half for a 81-64 victory over Pepperdine.

“I'm playing with energy and making the right plays," Childs said. “Teams have been digging and not doubling. When you do that I am going to try to go to work in the post.”

The Cougars' ninth straight victory gave them the second seed in the West Coast Conference Tournament. BYU (24-7, 13-3 WCC) doesn't play again until the tournament semifinals on March 9 in Las Vegas.

“It's huge. It gives you a good chance to go fresh,” Childs said.

Childs came in needing 30 points to become the sixth player in school history to score 2,000 points. He reached the milestone midway through the second half. He also had 14 rebounds for his third straight double-double.

Zac Seljaas added 12 points and Jake Toolson 11 for BYU, which was 8-0 in February.

The Cougars trailed 37-32 before they went on an 11-3 run to seize control and extend their winning streak to nine. Childs keyed the rally with eight straight points and also scored 12 of the Cougars' first 22 points in the second half.

Pepperdine was within four at 54-50 midway through the second half before BYU put it out of reach with a 10-3 run. The Cougars would extend their lead to 18 late in the half.

“We didn't guard well in the first half," Pope said. "They did a great job guarding us one-on-one. We got more physical and aggressive defensively in the second half.”

Kessler Edwards led the Waves (15-15, 8-8) with 24 points and 11 rebounds, and Skylar Chavez scored 11. Edwards had 18 points, including four 3-pointers, and nine rebounds in the first half.

“We turned the ball over too many times in the second half. We had too many empty possessions and allowed them to get a rhythm,” Pepperdine coach Lorenzo Romar said.

The Waves have lost two straight and will be the sixth seed in the conference tournament.

The Cougars raced out to a 15-9 lead as Toolson and Childs combined for 13 points. The Waves responded, though, with the next six points to tie it. There would be three ties and two more lead changes before Pepperdine would lead the final seven minutes of the half as Edwards scored 12 of the Waves' 14 points during one stretch.

BYU: The Cougars came in leading the nation in 3-point shooting (42.2%). They were strong again from beyond the arc, going 7 of 14.

Pepperdine: Colbey Ross was second in the WCC in scoring (20.2 points per game), but was held to eight on 3-of-11 shooting. The junior point guard also had a streak of six straight games with at least 20 points snapped.

Both teams will participate in the WCC Tournament, which starts Friday in Las Vegas.