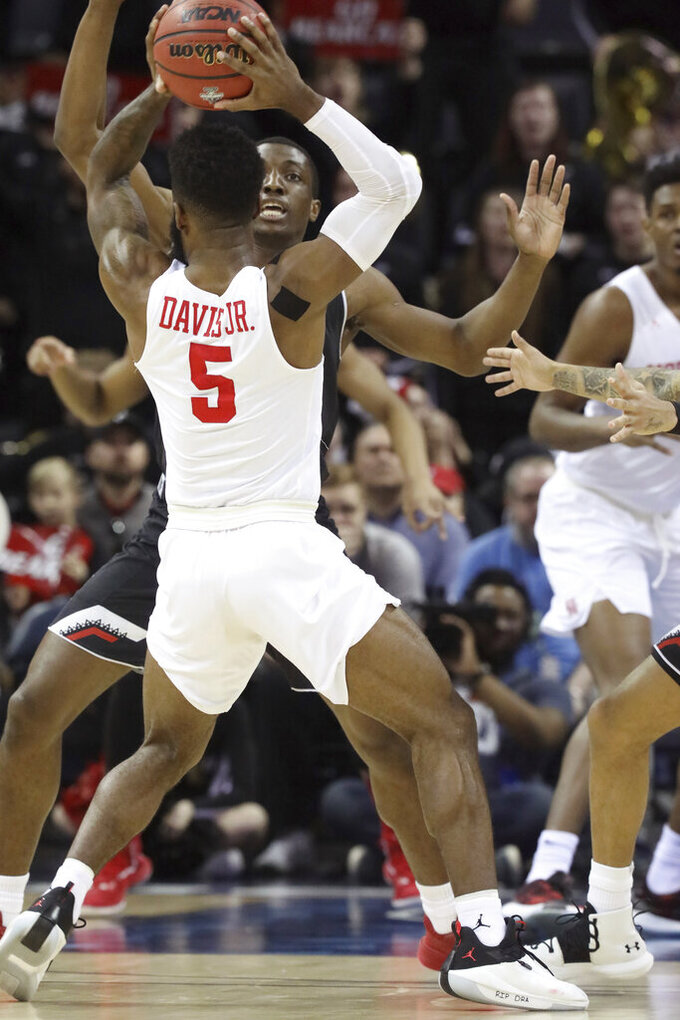 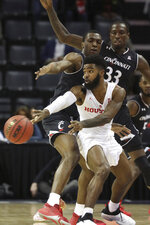 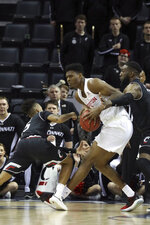 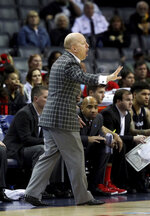 MEMPHIS, Tenn. (AP) — With conference player of the year Jarron Cumberland running the show, No. 24 Cincinnati pulled away to win its second American Athletic Conference Tournament.

Cumberland had 33 points and eight rebounds as No. 24 Cincinnati won its second straight AAC tournament title, defeating No. 11 Houston 69-57 on Sunday.

Cane Broome finished with 15 points and Tre Scott added 12 for Cincinnati (28-6), who had lost to Houston twice during the regular season, including 85-69 March 10 at Cincinnati. This time was different as the Bearcats shut down Houston's offense.

"We've had three terrific games with Cincinnati, at our place, at their place and (Sunday)," Houston coach Kelvin Sampson said. "Obviously, that's a difficult team to beat three times, especially over the course of five or six weeks.

"Watching how they played today, you can see how well we played the other two times when we beat them."

In the second half, Houston shot a mere 27.8 percent, including making 3 of 18 from 3-point range. That provided Cincinnati, the tournament's No. 2 seed, the opportunity to build a double-digit lead - a margin that reached 15 three times in the final seven minutes.

Sampson said he could tell Cronin had the Bearcats "really ready to play. You could tell they had a little bit of an ax to grind."

Cronin had noted after Cincinnati's semifinal win over Wichita State that the Bearcats rarely lose to a team three times in a season — another point of motivation for his team, along with holding the tournament trophy.

After Sunday's victory, the Cincinnati coach said the championship win gives his team a hint of the things necessary if they are to make a deep run in the NCAA Tournament, and with an emphasis on the thin margin between winning and losing.

"You've got to be hard to beat," Cronin said. "You can't (miss) layups. You've got to block out. You can't make dumb fouls and you try to maximize your potential on offense."

Armoni Brooks led Houston (31-3) with 17 points and Corey Davis added 12 for the Cougars, who were the tournament's top seed.

While the Bearcat defense stifled Houston shooting in the second half, Cincinnati put the ball in the hands of Cumberland, voted the tournament's most valuable player, and he responded with 20 second-half points. Cumberland made 7 of 14 shots after halftime and also was 6 of 9 from the free throw line.

Houston got in trouble early in the second half when two quick fouls sent forward Breaon Brady to the bench with four fouls. About the same time, Fabian White went to the bench holding his right wrist.

At that point, the Bearcats were taking the lead to 15 points and really weren't threatened the rest of the way.

"We would have liked to have won," Sampson said, later adding: "I'm not going to spend two minutes thinking about this game. I'm just excited about what's coming up."

Cincinnati: Cumberland, who was limited to only 11 points in a semifinal win over Wichita State, had surpassed that at halftime with 13 but was still struggling from the field. After halftime, he took over the game as the Bearcats extended the lead.

Houston: The Cougars suffered through 35 percent shooting in the first half. Brooks made five of the nine Houston field goals in the half. But things got worse after halftime as Houston had trouble converting shots and could never really cut into the Cincinnati lead. Injuries and foul trouble only made things worse

Cincinnati: The Bearcats are a seventh seed in the South Region and play Iowa, the region's No. 10 seed on Friday in Columbus, Ohio.

Houston: Earned a third seed in the Midwest Region and will play Friday against No. 14 seed Georgia State.