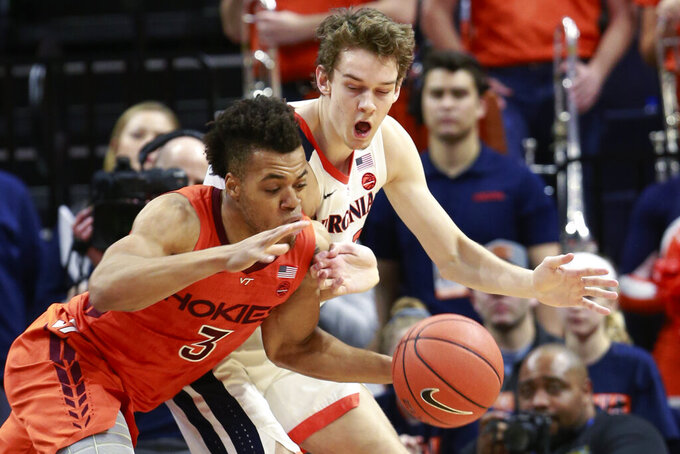 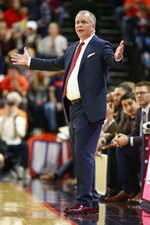 CHARLOTTESVILLE, Va. (AP) — Kihei Clark‘s primary job as Virginia’s point guard is to set up teammates for opportunities to score. For one game, at least, the sophomore served as the primary scorer for the No. 19 Cavaliers.

Clark scored a career-best 18 points to lead Virginia to a 65-39 victory over Virginia Tech on Saturday. Braxton Key had 18 points and 10 rebounds for the Cavaliers, but it was Clark's performance that caught the attention of Hokies coach Mike Young.

“Obviously Clark got the best of him today in a matchup we needed to win,” Young said, referring to Hokies point man Wabissa Bede, who was scoreless in 30-plus minutes with two assists. “He carved us up pretty good.”

Clark has been turnover-prone in recent games, with coach Tony Bennett surmising that he was driving too deep into the lane before making passes. The adjustment they made in practice this week paid big dividends.

“We tried to open the court a little more and let him attack and make some decisions and he was really good,” Bennett said.

“I felt like they were really keying in on the big guys, and so I just saw a lane and took advantage of it” said Clark, who was 5 for 9 from the field.

Kody Stattmann added 10 points and eight rebounds for the Cavaliers, who won their eighth in the last 11 meetings with the Hokies.

The Hokies came in averaging 74 points, but were being outscored by Key and had only nine when coach Mike Young called a timeout with about 4 minutes left in the half.

Virginia Tech arrived averaging just 9.5 turnovers and coming off a game when it tied a school record by committing just two. But the Hokies had three in the first four minutes and 13 overall, including 5- and 10-second violations.

“Sloppy basketball just drives me insane,” Young said. “I couldn't tell you the last time ... and that is embarrassing.”

Nolley had a big first half, but was shut down in the last part of the game. Bennett said Key was a big reason why, noting that a cast on Key's surgically repaired right wrist had been replaced by a splint since the last game.

“It was more Braxton just doing the job,” Bennett said of slowing Nolley. “He was there a touch quicker. He took the challenge and didn't allow him to get as much separation.”

Virginia Tech: Virginia Tech boasted one of the nation's top 3-point shooting resumes, having made 39.4% through 13 games, but struggled mightily against the Cavaliers' defense. That was especially true for P.J. Horne, who was shooting 43.2% (19 for 44), but missed all nine of his attempts. The Hokies finished 4 for 25 from deep.

“We're going to have a hard time if we can't ring the bell from there,” Young said.

Virginia: Clark's career high in scoring was a good sign as most of its came from inside the 3-point line on drives and at the free-throw line. Many of his turnovers in recent games came when he drove the lane and tried difficult passes. This time, he went to the basket and scored himself.

The Hokies remain on the road, playing at Syracuse on Tuesday night.