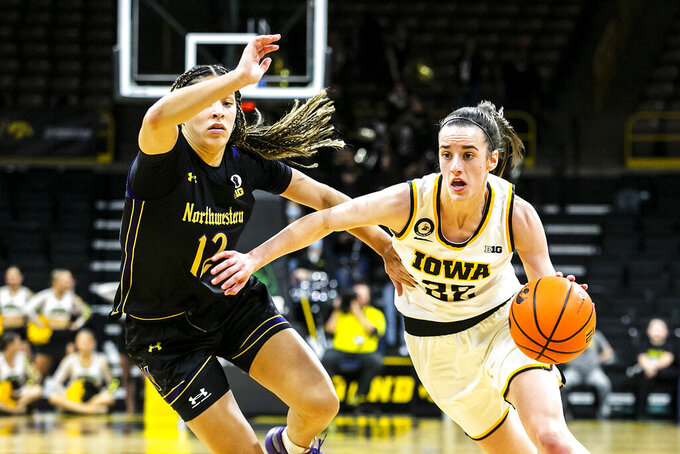 MINNEAPOLIS (AP) — Iowa's Caitlin Clark posted her second straight 30-point triple-double, setting a Division I basketball record for men or women, and the No. 25 Hawkeyes rolled to a 105-49 victory over Minnesota on Thursday night.

Clark leads Division I women’s basketball in scoring at 26.2 points per game and has five career triple-doubles, including four this season.

Sabrina Ionescu, who finished at Oregon in 2020, is the overall NCAA record holder with eight triple-doubles in a season and 26 in a career.

Clark had 15 points in the second quarter, helping Iowa take a 47-34 lead at the half against the Minnesota team coach by former WNBA star Lindsay Whalen. Clark was among three Hawkeyes with 10 points in the third quarter when they outscored Minnesota 37-12. The Gophers only managed 3 points in the fourth quarter.

In setting the record for consecutive triple-doubles while scoring 30 or more points, Clark tied her rebounding career high with 13 boards, all on the defensive end.

This story has been corrected to show Clark had 11 assists, not 14.