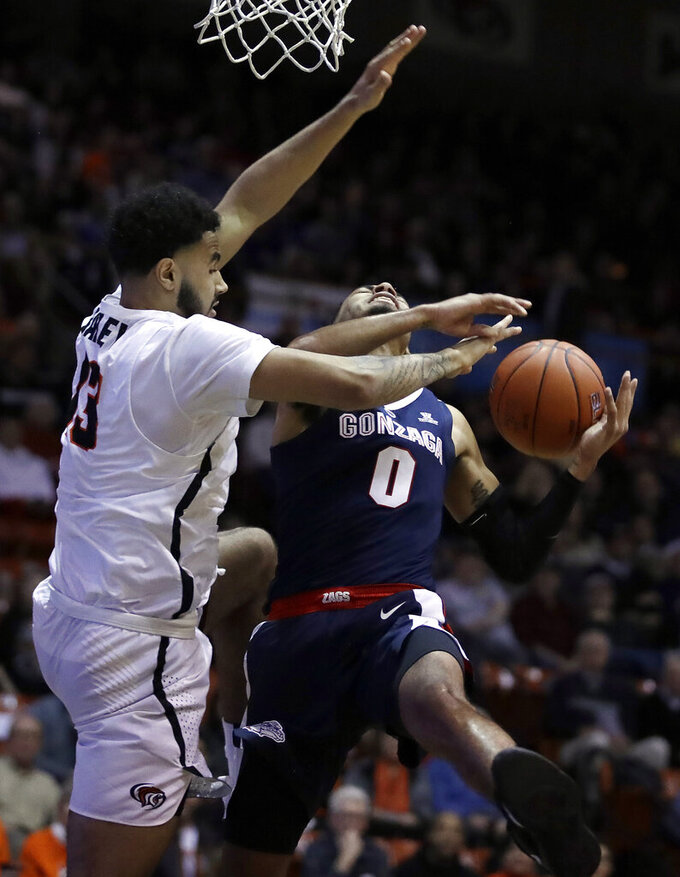 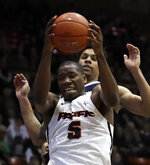 STOCKTON, Calif. (AP) — A renewed focus on defense helped Gonzaga get back to the No. 1 ranking it held for three weeks earlier this season.

Brandon Clarke, one of the anchors of that defense, is determined to keep the Bulldogs there this time.

"We just really worked on our defense a lot, our focus on the scouting report every game and having that overall focus," Clarke said. "People say that defense is the best offense, so I really feel like that's true when I can block shots."

Back atop the rankings for the first time since December, the Zags had little trouble against the Tigers and inched closer to a fifth unbeaten conference record in 20 seasons under coach Mark Few. The Bulldogs close out the WCC schedule Saturday at Saint Mary's.

Gonzaga was held to a season-low 67 points by Pacific when the teams played earlier this season in Spokane. After a slow start this time, the Bulldogs pulled away by halftime and led by 26 while silencing a near-capacity crowd at Spanos Center.

"For the most part our defense won the first half and our offense won the second half," Few said. "It was kind of a tale of two halves. They're a tough team. They're physical and athletic. A 20-point win on the road against a tough team on senior night, I'm happy with that."

Clarke led the way with his third straight double-double and did most of his scoring in the first half, while Hachimura fueled Gonzaga's offense in the second half.

It was noticeably different from the first time the teams played earlier this season when the Tigers held the Bulldogs' talented duo to 10 points apiece.

"We were trying to be strong in the post with our shots, trying to not get bumped out of position," Clarke said. "That's something that we have worked on a lot in practice."

Coming off consecutive double-doubles in wins over Pepperdine and BYU, Clarke scored 10 points and didn't miss a shot during a 25-6 run in the first half when the Bulldogs pulled away following a sluggish start.

Clarke, who had three blocks before halftime, had a steal near midcourt and fed Hachimura for a soaring one-handed dunk when Gonzaga pushed its lead to 20.

Hachimura made two more dunks in the second half, including one off an alley-oop lob from Geno Crandall that made it 61-37. That dunk kicked off a stretch where Hachimura scored 12 of 16 points for the Bulldogs.

"They came out aggressive and they kept hitting us with that high-low action," said Pacific's Roberto Gallinat. "Once they get hot it was just difficult. This time their bigs had game."

Like it did when the teams played earlier this season in Spokane, Pacific (13-17, 3-12) slowed its offense and repeatedly ran the shot clock down to the final seconds in an attempt to limit Gonzaga's possessions. But the Tigers shot 23.1 percent in the first half and couldn't slow the Bulldogs in transition.

Gonzaga: The Bulldogs have won 30 consecutive WCC road games and 29 straight overall. Although Pacific was semi-effective in muddying up the game, Few's squad kept coming on offense and was too much for the smaller and slower Tigers. Now it's on to face Saint Mary's, where the Zags will try to complete the conference sweep.

Pacific: Damon Stoudamire's team did some good things, especially Gallinat. But Pacific eventually wore down and dropped its sixth straight. ... Pacific last hosted a No. 1-ranked team in 1987 when UNLV went to Stockton on Feb. 9 and won 73-59.

Pacific: Plays at Pepperdine on Saturday.