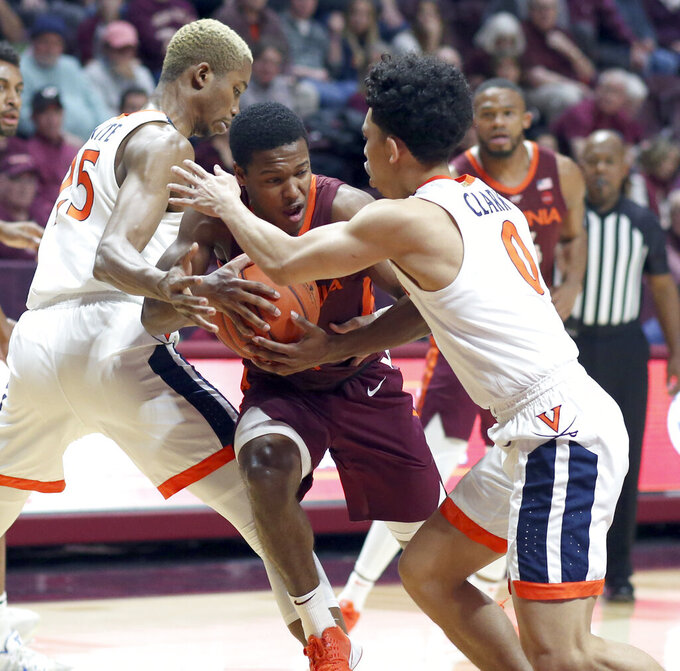 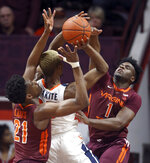 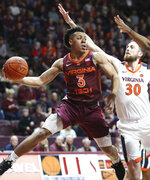 BLACKSBURG, Va. (AP) — Kihei Clark knew exactly what he was going to do when he took an inbounds pass in a tie game on the road and 11 seconds racing quickly off the clock.

“Yeah. I was shooting it,” the sophomore point guard said after his 3-pointer with 2.1 seconds left lifted Virginia to a 56-53 victory at Virginia Tech on Wednesday night, saving them after they blew a big halftime lead.

“I probably just used the ball screen and I kind of figured they thought I was going to be driving so I crossed back and I created some space,” he said.

And gave the reigning national champions another nail-biter win. It extended their winning streak to five, four of them decided by three points or fewer.

“We're giving a lot of people a heart attack,” forward Braxton Key said. “We're learning. We're a young team. We're starting to grow up though. We're learning how to win.”

Clark's lone 3-pointer rescued Virginia (20-7, 12-5 Atlantic Coast Conference), which led 26-11 at halftime before the Hokies started making shots they'd been missing. They twice took the lead in the final five minutes, and Tyrece Radford's slicing drive for a layup with 11 seconds left tied things at 53.

“We were doing the exact same things in the second half that we were doing in the the first half,” first-year coach Mike Young said. The only difference was that they were being a little bit more aggressive and shots were falling, he said.

The Cavaliers (20-7, 12-5 Atlantic Coast Conference) solidified their hold on fourth place in the conference standings and won their fourth straight in the series. The Hokies (15-13, 6-11) lost for the eighth time in nine games, and Young said he's not as concerned with his team's psyche as winning games.

“We don't get into feelings around here,” he said.

Mamadi Diakite led Virginia with 19 points, Key had 10 with 11 rebounds and Clark had seven points, six rebounds and six assists.

Virginia Tech came back after setting a program record since joining the ACC in 2004 with just 11 first-half points to trail 26-11. Their comeback began immediately after halftime as they hit 6 of 7 shots, including all three 3-pointers, then used an 11-2 run to get within 40-37 on P.J. Horne's 3-pointer.

Virginia: The Cavaliers lead the nation is scoring defense (52.7) and have done much of their best work against the Hokies. They held Virginia Tech to just 17 first-half points in their first meeting, a 65-39 victory, tying a Hokies' first-half futility record since they joined the ACC in 2004. Virginia Tech has managed just 17 three times, twice against Virginia (2014, 2020) and once against Temple (2009). The earlier game this year also marked Virginia Tech's lowest scoring total since a 43-33 loss to East Carolina in 1967.

The Cavaliers return home to face No. 7 Duke on Saturday night.

The Hokies head out on the road to play at No. 11 Louisville on Sunday. ___