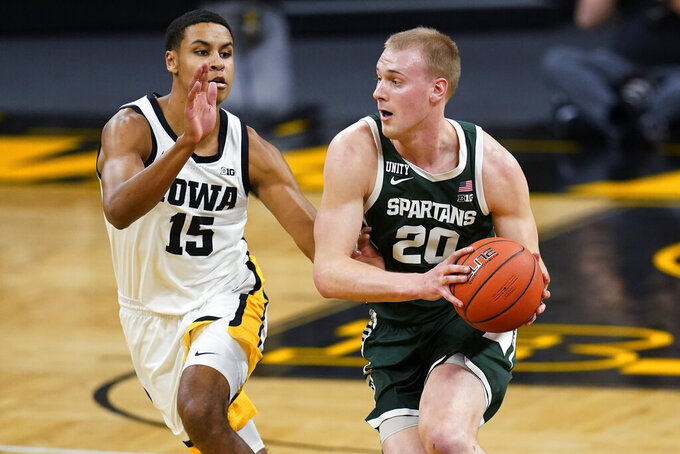 FILE - In this Feb. 2, 2021, file photo, Michigan State forward Joey Hauser (20) drives upcourt ahead of Iowa forward Keegan Murray (15) during the first half of an NCAA college basketball game in Iowa City, Iowa. The Spartans will lean on Hauser to be a consistent leader after an up-and-down season left him with a 9.7 scoring average last year. (AP Photo/Charlie Neibergall, File)

EAST LANSING, Mich. (AP) — Michigan State is unranked in the AP Top 25 preseason poll for the first time in a decade and its Hall of Fame coach isn't happy about it.

“It does tick me off," Tom Izzo said Wednesday.

Izzo is not alone.

Expectations are relatively low for the Spartans, unranked before a season for the first time since the 2011-12 season. Last season, they barely extended their NCAA Tournament streak to 23 seasons and this year's team appears to lack a go-to player.

“If you ask who the star player is, I'm not sure I could answer you," Izzo said. “It has not been that way for many years."

Izzo also is leading a squad that had a lot of turnover.

Michigan State did receive the most votes among unranked teams and Izzo has a lot of solid players to work with in his 27th season.

Joey Hauser, who averaged 9.7 points per game last season, and Brown are two of seven returning players with some experience. Former Northeastern standout guard Tyson Walker along with a highly touted recruiting class led by Max Christie provide the program with an influx of talent.

“We don’t have a go-to guy, but everybody brings something to the table,” Brown said.

Izzo's last team that started a season outside the poll went on to earn a share of the Big Ten title and finished ranked No. 5 in the country.

“Three guys that have been as good or better than the billing and that does not happen," Izzo said.

Izzo does not like how common transfers have become in college basketball: “I'm afraid its going to become the wild, wild west on steroids."

The Spartans are expecting to speed up the pace much more on offense with Walker and A.J. Hoggard pushing the ball up the court quickly.

“We have a lot of athletes who can get out and run," Atkins said.

Dane Fife left his job as Michigan State assistant to be associate head coach at Indiana, where he played two decades ago, and that led to a series of changes.

Former Tulsa and College of Charleston coach Doug Wojcik was promoted to replace Fife. Ex-Northern Illinois coach and former Spartan guard Mark Montgomery returned for a second stint on Izzo's staff. Austin Thornton was hired to be the team’s video coordinator and Matt McQuaid to be its director of basketball operations, bringing two of Izzo's players back to the program.

Mike Garland is making a transition from being an assistant coach to Izzo's special assistant, focusing on the mental health of current plyers and keeping connections with former players.

“One of the things we decided to do was to get a little younger," Izzo said. “Draymond (Green) brought that to my attention."

The Spartans tip off the season Nov. 9 against No. 3 Kansas in New York City. They could also face No. 22 Auburn or No. 24 Connecticut along with No. 8 Baylor during a Thanksgiving week tournament in the Bahamas.

“We've got a brutal schedule," Izzo said. “We might get our brains beat in early."