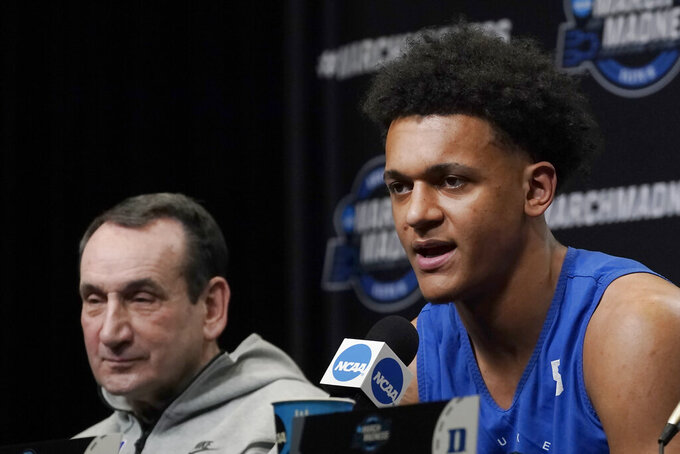 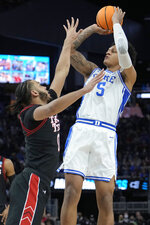 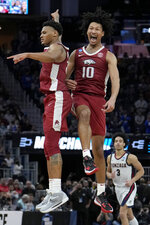 SAN FRANCISCO (AP) — When Duke's season and Mike Krzyzewski's coaching career were on the line in the closing minutes of the Sweet 16, it was a talented freshman who made sure it wouldn't end.

Paolo Banchero delivered the key plays down the stretch of the victory over Texas Tech that sent the Blue Devils into the West Region final against Arkansas.

“I dream of playing in games like that and performing in the biggest of moments,” Banchero said Friday. “I love the big moment. I love to step up when it’s most needed. A game like that, I really wanted to go out and leave my mark on the game and get a win.”

Krzyzewski said after the game he had never seen Banchero take his game to that level, calling it an instinctual thing that only the greats can do.

Krzyzewski, who plans to retire from coaching after the tournament, has plenty of experience with players who can perform like that over his nearly half-century career guiding some of the game's biggest stars.

“He’s got so much more that he is still going to develop,” Coach K said. “But it’s been a steady track up, and he is playing his best basketball right now.”

Krzyzewski said he just needs Banchero to do that “Again. And again and again,” as he hopes to end his Hall of Fame career with three more wins that would deliver his sixth national title.

The next test comes Saturday when the second-seeded Blue Devils (31-6) host the fourth-seeded Razorbacks (28-8).

Banchero helped get Duke to this stage by flashing the skills that will likely make him one of the most coveted prospects if he leaves as expected for the NBA after one season in college.

With the Blue Devils trailing by four in the Sweet 16 against Texas Tech, Banchero hit a 3-pointer with 8:19 to go that started a game-ending stretch of eight straight makes from the field against the nation's most efficient defense.

He made a layup a couple of minutes later that gave Duke a three-point lead, fed teammate Mark Williams for a dunk on the next possession and then drilled the 3 with 2:55 to play that gave Duke the lead for good and the spot in the regional final.

“It’s like when great players just go,” Krzyzewski said. “They just go, and the moment and the need take them to a place that a great player would love to be in, and that’s where he was. I’m just so happy that I was there for that moment with him because it’s his. It’s his, but it benefited all of us.”

All that stands between Krzyzewski and his record-setting 13th trip to the Final Four is an athletic Arkansas squad that relishes the role of spoiler.

The Razorbacks knocked off No. 1 Auburn in February and then did it again when they eliminated Gonzaga, which was the top overall seed in the entire tournament and the No. 1 team in the final AP Top 25. That made Arkansas the first team ever to beat a No. 1-ranked team both in the regular season and tournament in the same season.

Now a team few thought would make it this far is back in the Elite Eight for a second straight season with a chance to spoil Krzyzewski's valedictory tour.

“I don’t think I’ve ever talked to a basketball team about another coach,” Razorbacks coach Eric Musselman said. “We have a very limited amount of time, and we just have to focus on who they might be guarding and what are their themes on both sides of the ball.”

Arkansas managed to neutralize Gonzaga’s size advantage with Chet Holmgren in the middle in the Sweet 16 and now must contend with a Duke team that has a 7-foot-1 center in Williams and the 6-10 Banchero, who is skilled both inside and outside.

“He has a lot of size and he also can move really good,” forward Jaylin Williams said about Banchero. “It creates a lot of mismatch things, but we played against players the whole year. We’ve gone into situations where we changed our defensive looks at people, so it’s a different challenge, of course, but we have something that we’re going to do, and we’re going to be ready for them.”

A win would sent Arkansas to the Final Four for the first time since 1995, when coach Nolan Richardson's team lost the final to UCLA.

That run came a year after the Razorbacks won their only national title, beating Duke 76-72 for a championship that still resonates around the state.

“I was nowhere near born then,” said Arkansas' Williams, who's 19 years old. “But you hear growing up in Arkansas, everybody knows about that team and what they did for the state and just being able to get close to the same position they’re in is great.”