Cockburn leads No. 12 Illinois past Northwestern 81-56 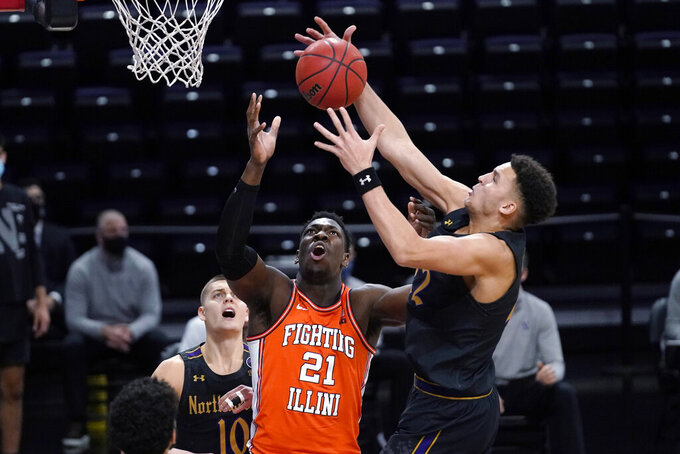 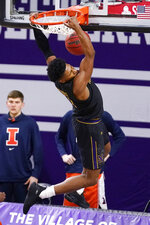 EVANSTON, Ill. (AP) — Illinois coach Brad Underwood went to talk to his team at halftime and saw exactly what he needed to see.

The 12th-ranked Illini were angry and disappointed — and they took it out on Northwestern.

Kofi Cockburn scored 13 of his 18 points in the second half, and Illinois rallied to beat the overwhelmed Wildcats 81-56 on Thursday night.

“This team has a fight and a competitiveness that I love,” Underwood said.

That was on full display during a historic second half. Illinois (9-3, 5-1 Big Ten) outscored Northwestern 53-13 after it trailed by 15 at the break. The Illini limited the Wildcats to just two field goals and forced nine turnovers in the final 20 minutes of their biggest victory at Northwestern since a 63-30 blowout on Feb. 19, 2000.

According to STATS, Illinois became the first team to outscore a major conference opponent by at least 40 points in a single half since Kentucky outscored Vanderbilt by 43 in the second half of a 106-44 win on March 5, 2003. The Illini are the only Division I team in the last 25 seasons to trail by at least 15 points at halftime and come back to win by 20 or more.

“I've never been (a part) of anything like that,” Cockburn said. “You saw it, man. You saw how we reacted to it. I was in awe. Just being on the floor, watching it happen, being a part of it, it was a really good feeling.”

Cockburn went 8 for 9 from the field in his eighth double-double of the season, asserting himself in the middle after Illinois got off to a rough start. Ayo Dosunmu added 15 points, and Trent Frazier and Adam Miller each scored 14.

Illinois trailed by as many as 16 — it was so ugly that Underwood yelled “What are we doing?” at his team during a first-half timeout — before completely overpowering Northwestern (6-4, 3-3) in its fourth straight win.

Robbie Beran scored 11 points for the Wildcats in their third consecutive loss.

“To only score 13 points and have a couple field goals (in the second half), we just have to play better,” coach Chris Collins said.

Northwestern closed the first half with a 12-1 run for a 43-28 lead. But the Wildcats looked tired down the stretch of their fourth straight game against a Top 25 team.

“We came together,” Cockburn said. “We didn't hold our head down. We didn't sulk about anything. ... We just came out there and we swung back.”

Illinois senior Da’Monte Williams tweaked an ankle injury that Underwood said has been bothering him for about a month. Williams finished with six points on 2-for-5 shooting in 23 minutes.

“I don’t know the severity of it,” Underwood said. “After we walked out of the locker room, he said he felt good.”

Illinois: The Illini earned their fifth straight win in the series against the Wildcats. Once Cockburn got going inside, it was all over.

Northwestern: The Wildcats just fell apart in the second half. They shot 33% (18 for 55) for the game.

Northwestern: Visits Ohio State on Wednesday. The Wildcats beat the Buckeyes 71-70 on Dec. 26.