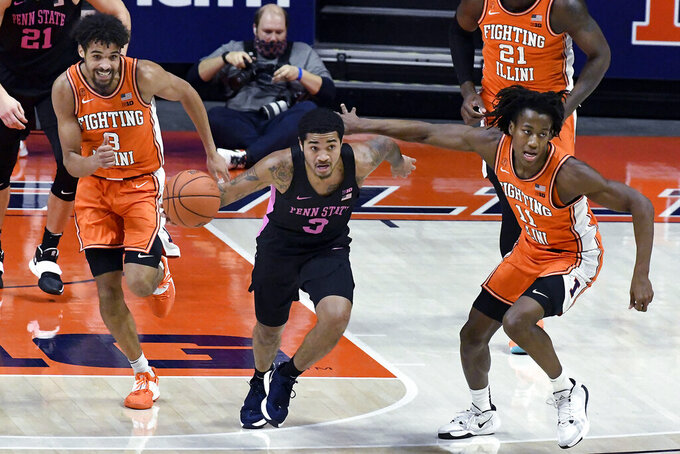 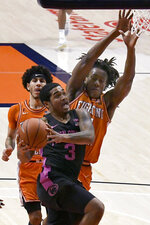 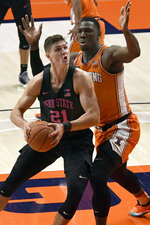 “We were better tonight (after two consecutive losses),” Illinois coach Brad Underwood said. “The biggest challenge in this game is the mental preparation. I told the guys I would coach them hard this week.”

Illinois charged to a 13-5 advantage and never relinquished the lead. The Illini led 42-28 at the break. Dosunmu scored just three points in the first half.

“Obviously, we got off to a good start tonight,” Underwood said. “Our passing skills were evident tonight. It was fun to watch.”

Illinois held an 18-8 advantage in assists. Dosunmu had 5 assists and freshman guard Andre Curbelo had 4.

“We had 18 assists, and that is very good,” Cockburn said. “When we play connected like that, it's very hard to beat us."

A scrum with two seconds left in the half resulted in technical fouls being called on Da’Monte Williams of Illinois and DJ Gordon of Penn State.

Ferry was called out by the conference for his actions after the Nittany Lions lost to the Boilermakers 80-72 on Sunday.

“I’ve been doing this a long time. I have great respect for the officials," Ferry said after the game. “I have really high standards for myself, for my team, and the way we represent Penn State. And again, my actions failed to do that. And that’s on me. I’m extremely disappointed in myself. Obviously, I’ve definitely learned from this experience, and it won’t happen again. I’m truly sorry.”

One thing Illinois seemed to correct from the past two games was a lack of energy on the court.

“Everyone played their butts off out there tonight,” Frazier said. “From the opening minute, you could just feel the energy out there.”

Illinois did what it had to do to prevent its third straight loss. One thing that helped was avoiding a slow start, which has plagued the team all season.

Ferry on playing Illinois: “I thought as a team, their whole defensive disposition was significantly different (from the two teams' last minute in December). They were really physical. They were physical with our guards. They were physical on ball screens. They were playing with a sense of urgency. When you have Kofi inside, and you have Ayo on the outside, that’s a great combination, and I think it allows other guys to just play.”

Illinois was expected to beat Penn State at home, and did easily. Look for the Illini to creep up a bit in the polls as a result.

Illinois: The Illini’s game at Michigan State, scheduled for Saturday, was canceled due to COVID-19 issues with the Spartans. Illinois doesn’t play again until it hosts No. 4 Iowa on Jan. 29.