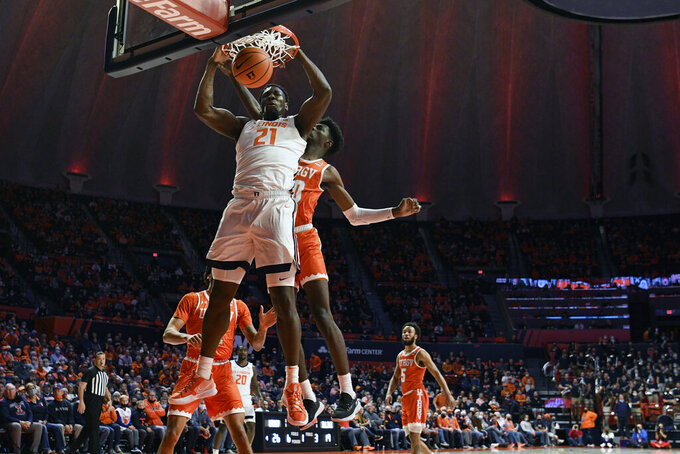 Illinois (4-2) started slowly, trailing the Vaqueros by as many as 12 points in the first half. Timely buckets from Cockburn and Alfonso Plummer, a transfer guard from Utah, helped the Illini go on a 15-5 run to take a one-point lead at the half.

Plummer scored 30 points on 8 of 14 shooting, connecting on 6 of 11 3-point attempts. He also scored the team’s first six points in the second half.

“(Plummer) played like a senior, like a veteran,” Illinois coach Brad Underwood said. “Played like a guy I’ve labeled one of the best shooters in the country. We needed every one of those points from both of those guys.”

Cockburn got open in the lane for a dunk to put the Illini up 88-83 with 1:40 to play, and later knocked down a pair of free throws to clinch the win in the final minute.

Justin Johnson was the leading scorer for Texas Rio Grande Valley (4-3) with 28 points. Marek Nelson had 23 points and a team-high seven rebounds.

Illinois was without starters Andre Curbelo and Trent Frazier due to injuries, while Jacob Grandison missed the game due to an illness.

Cockburn did his best to replace the missing production, adding 10 rebounds and a block to his point total.

“I was going to roll with Kofi because they couldn’t stop him,” Underwood said.

It was Plummer’s second time this week scoring more than 20 points. On Tuesday, he made seven 3s for 21 points in a 72-64 win over Kansas State on Tuesday.

“Like I said the other day, I’m back,” Plummer said. “I’ve been working a lot on my game, and I feel like it’s getting there. I’m just going to keep doing the same thing to help the team to win.”

Texas Rio Grande Valley repeatedly triple-teamed Cockburn in the paint, and Plummer was the main beneficiary.

“Every time he shoots it, I have a smile on my face,” Cockburn said.

Friday marked the first time that Illinois had two players score 30 or more points in a game since a double overtime win over Wisconsin-Milwaukee on Dec. 3, 1990, when Andy Kaufmann had 46 points and Deon Thomas had 34 points.

Injuries and other absences have stunted the Illini’s chemistry early on this season. If Cockburn and Plummer are the only players able to consistently produce, it could spell trouble next month with Notre Dame, Rutgers and No. 17 Arizona looming.